BlueLousa, http://bluelouisaorg.fatcow.com/ has several posts showing the many ways Virginia’s Republicans intend to suppress voting. Beyond winning elections, one of their primary objectives this year is to limit voting by any means necessary to favor the “right” kind of people, who will vote for their candidate, and their recent actions are confirming that this is how they see the future of elections.

Like how Republican Virginia State Board of Elections Secretary Donald Palmer – appointed by former Governor, “SpongeBob” McDonnell sent 125,000 registered voters’ letters saying they appeared to be registered in another state. When questioned about it, he claimed they were an “administrative error“, leaving his underlings to confirm that they were “accidentally” sent to voters who had moved within Virginia – not voters registered in multiple states, in addition to sending out all those correction letters, all on the state’s dime.

This is not the first time he has tried this, two years ago he tried to purge thousands of “suspected” out-of-state voters with a list so error-riddled, that Republican Chesterfield County Registrar, Lawrence C. Haake III refused to use it. And predictably, Palmer tried to have local elections board to overrule him. http://thinkprogress.org/elect… virginia-elections-error-letters/

Multiple papers extensively covered how the Board passed along party lines by a 2-vote a motion stating that any photo ID’s used for voting must be current. With Chairman and lifelong Republican operative Charlie Judd disingenuously stating “It’s understood that ‘valid’ means you can use that for its intended purpose. That means if you cannot use that driver’s license for its intended purpose, it’s no longer valid.”

Makes you wonder what he thinks about the intended purpose of the new free Virginia Voter Photo Identification Card which never expires that you can get at your county registrar’s office? 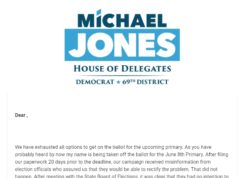