On Tuesday, we wrote about Virginia State Senator Mark “Criminalize Miscarriages” Obenshain’s relentless efforts to make it harder for Virginians to exercise their right to vote. Most recently, Obenshain has been trying to bully the Virginia State Board of Elections (SBE) into reversing its plans to eliminate the current 30-day limit on expired IDs for voting purposes. Well, the meeting just concluded, and here’s the result (per Markus Schmidt of the Richmond Times-Dispatch and Tram Nguyen of Virginia New Majority). 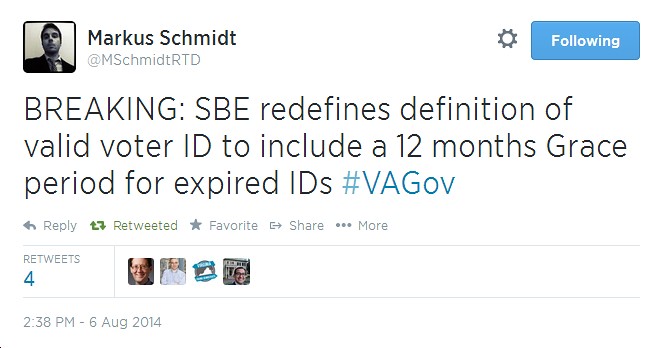 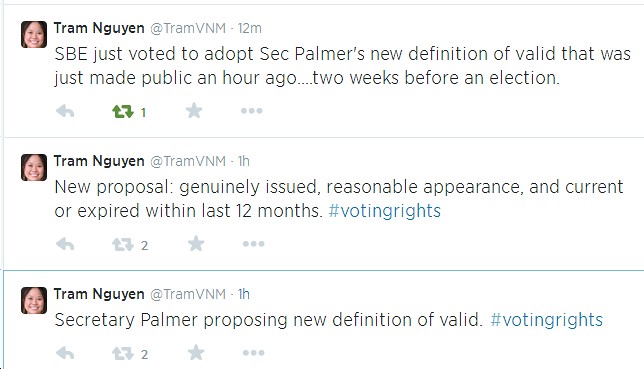 Huh? Does that make any sense at all to anyone? What about Tram Nguyen’s points about the new definition just being made public earlier this afternoon, only two weeks before elections are scheduled to be held? Brilliant, huh? (not)

More to the point, does this decision conform with the Attorney General’s opinion that changing the definition of “valid” in this way would violate the Equal Protection Clause of the Fourteenth Amendment to the United States Constitution “in that it would lead to an inconsistent result in its application and disparate treatment of voters from one jurisdiction to another?” Nope, didn’t think so. Yet that’s what the (mostly Republican) geniuses at the Virginia State Board of Elections have decided to do – basically kick the can down the road for 12 months, then cave to Mark Obenshain and all the other “voter fraud” conspiracy theorists out there. In sum, the SBE swung…and missed, badly. Nice job, guys, can’t wait until your 4-year terms expire (in Palmer’s case, I believe that will be in early 2015, since he was appointed by Bob McDonnell in January 2011).