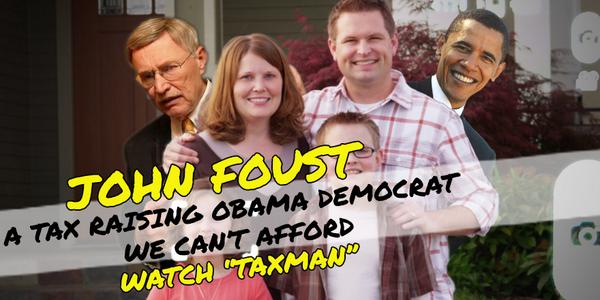 Ethically and factually-challenged Republican 10th CD nominee Barbara Comstock is known for her struggles with the truth. She’s so truth-challenge that one of her Republican opponents last spring point blank said, “Barbara, YOU LIE!” for her ever-changing story about why she voted for Barack Obama in the 2008 Virginia Democratic primary. To put it mildly, she’s a real piece of work when it comes to facts, accuracy, honesty, and even the internal consistency of her lies.

Well, now Comstock’s at it again, this time criticizing 10th CD Democratic nominee John Foust for being – are you sitting down? – a “tax raising Obama Democrat!” Yeah, the same Obama who Comstock voted for in 2008. But we’ll leave that aside for now. The question is whether Comstock’s in any way, shape or form telling the truth on this one. Hint: the answer has two letters, the first of which is an “n” and the second of which is an “o.” Heh.

OK, so how about a few facts, those crazy things that Barbara Comstock doesn’t seem to have any familiarity with?

1. According to CBS News’ “What’s Obama Doing to Your Taxes?” (April 2010), which reported on the fact that the 2009 Recovery Act (supported pretty much exclusively by Democrats, I’d point out) CUT TAXES for 98 percent of Americans. The CBS News report added that as of April 2010, “taxes are at their lowest levels in 60 years, according to William Gale, co-director of the Tax Policy Center and director of the Retirement Security Project at the Brookings Institution.”

3. What about since 2009/2010? Well, you may have noticed that since 2010, Republicans have controlled the U.S. House of Representatives, so keep that in mind when you hear loose-with-the-truth people like Barbara Comstock criticize President Obama for raising taxes. Last I checked, Congress was the branch of government that voted on tax rates and the like. But whatever, details details.

4. Anyway, it turns out that the Bush tax cuts of 2001, “which had been extended for two years by the 2010 Tax Relief Act, were due to expire on December 31, 2012.” Pause for a second and note that President Obama signed off on an extension of the freakin’ Bush tax cuts. Yep, that’s some real “tax raising” right there – not!

5. What ended up happening is that Congress overwhelmingly (89-8 in the Senate; 257-167 in the House, including John Boehner as an “aye”) passed the American Taxpayer Relief Act of 2012 on January 1, 2013, which President Obama signed it into law the next day. So, yes, this “raised taxes,” but by far, far less than would have happened if the Bush tax cuts of 2001 had simply been allowed to expire, as they were scheduled to do. Also, again, 40 Republican Senators and 85 Republican Congresspersons – including Speaker Boehner – voted for this “tax increase”. Finally, note that this bill mostly returned tax rates to where they were during Bill Clinton’s presidency, and even then only for people making $400,000/$450,000 a year (in addition, a “phase-out of tax deductions and credits for incomes over $250,000 for individuals and $300,000 for couples was reinstated”).

Bottom line: Barack Obama most certainly has not been a “tax raising” president, but if one WERE to make that claim, then one would also have to say the same about Presidents Reagan and Bush, as well as John Boehner and the Republican-controlled House of Representatives. Of course, this IS Barbara “YOU LIE!” Comstock we’re talking about, so let’s not expect a correction anytime soon…