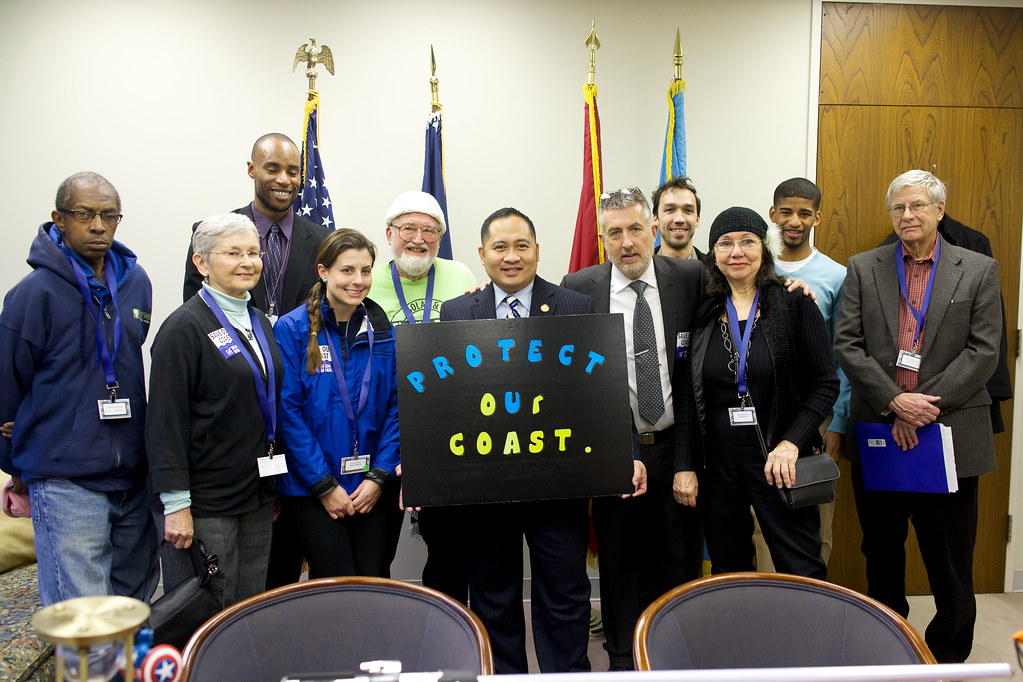 The event today was sponsored and organized by the Virginia Conservation Network, with almost 200 people turning out in support of combatting climate change and protecting Virginia’s coasts from rising seas. By the way, Del. Villanueva is a Republican, demonstrating that the Virginia GOP doesn’t HAVE to be the reflexively anti-environmental, anti-science party.

RICHMOND-Scores of coastal Virginia residents converged on Richmond today to join the largest environmental lobby day of the year, and bring this message to state lawmakers: Pass the Virginia Coastal Protection Act. This bipartisan legislation would generate urgently needed funds to help Tidewater citizens and localities adapt to rising sea levels, while also reducing emissions of the heat-trapping pollution driving climate change impacts across the commonwealth.

“The water is here now, and it’s only getting higher,” said Bob Baxter, a resident of Norfolk’s historic Riverview neighborhood and volunteer with the Chesapeake Climate Action Network (CCAN) who came to Richmond today. “Twice in two years, I’ve had to help my neighbor clean out a flooded home. The water even brought waste from the nearby zoo into her home. If the water rises seven more feet, as scientists say could happen in coming decades, then my house will be in danger as well. Something has to be done.”

The Virginia Coastal Protection Act (SB 1428/HB 2205), introduced by Republican Delegate Ron Villanueva of Virginia Beach and Democratic Senator Donald McEachin of Richmond, is supported by the city of Norfolk through its lead representative in Richmond and by all of Virginia’s major environmental groups. The bill is the priority focus of today’s 2015 Conservation Lobby Day, sponsored by the Virginia Conservation Network (VCN). Over 60 residents trekked to Richmond from the Hampton Roads region, joining over 100 more citizens from across Virginia.

Activists donned “Save Our Coast” stickers and carried a banner declaring “The Seas are Rising and So Are We” to show their visible support inside and outside the halls of the General Assembly building.

“As a Norfolk resident who lives in an at-risk flood zone, I’ve seen the studies showing the impact of flooding from severe weather events and sea level rise on Hampton Roads,” said Joe Cook, chairperson for the Sierra Club, Chesapeake Bay Group. “The studying has been done, so we need urgent action from the General Assembly this session to pass the Virginia Coastal Protection Act before the next Sandy strikes here.”

Coastal Virginia is second only to New Orleans in vulnerability to rising sea levels. Flooding and storm surges threaten the safety of 1.7 million residents, along with port, naval, and tourism assets that are critical to the economy of the commonwealth as a whole. Yet, no dedicated source of funding currently exists to help localities tackle necessary projects, from raising homes and roads to restoring shorelines and beaches to building water pumps and sea walls.

Del. Villanueva and Sen. McEachin’s bill would generate $200 million or more per year by 2020 by joining Virginia into the Regional Greenhouse Gas Initiative (RGGI), a market-based system that caps and reduces carbon pollution from power plants. A full half of the RGGI revenues would help fund coastal protection measures, while additional funds would support economic development in Southwest Virginia and energy efficiency and clean energy projects statewide.

Virginia Beach resident Gary Medlin is also in Richmond today to lobby his legislators. In a Virginian-Pilot op-ed published January 11 with CCAN director Mike Tidwell, Medlin applauded the move to join RGGI, saying, “Virginia’s budget is tightening, and there’s no multibillion-dollar fund to help the coast. Bottom line: There is no viable source of money on the table for our coastal needs-except one.”

Joining RGGI is also the most efficient and cost-effective way for Virginia to meet forthcoming federal rules the standards of the federal Clean Power Plan in a way that maximizes economic benefits and job creation, as editorialized by the Washington Post. The Clean Power Plan has set goals for states to reduce carbon pollution from existing coal-burning power plants by 2030. Virginia is already 80% of the way toward meeting its goal due to steps utilities were already planning.

In addition to meetings with legislators, today’s Conservation Lobby Day included a panel discussion on climate-impacted communities across Virginia. Speakers underscored that communities are paying a high price for Virginia’s heavy reliance on fossil fuels now, and the costs of inaction will only grow.

Panelist John Deuel, a long-time Norfolk resident, Environmental Consultant and Conservation Chairman for the Sierra Club’s Hampton Roads Group, said: “For me and all residents of southeastern Virginia and particularly south Hampton Roads, climate change and sea level rise has become both a threat of disaster from big storms and an ongoing worry for everyday life. Every day, more of my neighbors are becoming aware and alarmed about the risks of rising sea levels and how they will adjust to this reality.”