Yeah, I know, it’s not a big surprise that 2013 Virginia Republican gubernatorial nominee (and, as much as I still can’t believe it actually happened, Attorney General of Virginia) Ken Cuccinelli’s nuts: about climate change, homosexuality (and sexuality in general), government, guns, etc, etc. Now it turns out he’s nuts about foreign policy as well.  Did I miss anything? In reality, of course, without a deal, Iran could simply continue pursuing a nuclear weapons program, as it apparently has for many years (e.g., under the Bush administration, which completely failed to stop it; then under the Obama administration, which has a chance of stopping it via negotiations). The only alternative? War, which would be a bloody mess, and which almost certainly wouldn’t stop Iran’s nuclear ambitions for more than a few years. So what are the alternatives being offered by Teapublicans like Ken Cuccinelli?  No idea, except that they love to bash Barack Obama for whatever reason(s). 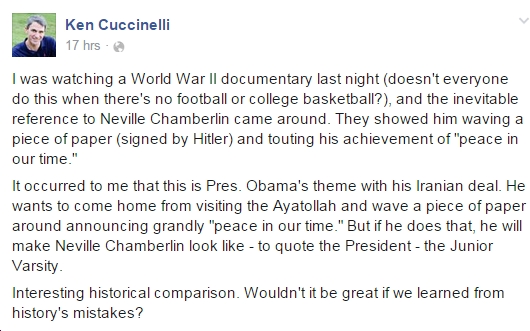