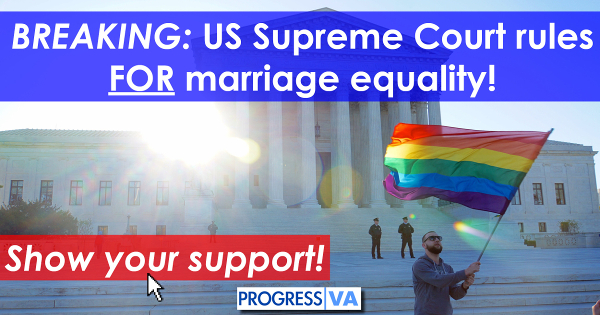 Two days in a row, two – or three, if you count the fair housing case – excellent decisions by the Supreme Court (and no, I can’t believe I’m actually saying those words!). Yesterday, it was the Affordable Care Act and Fair Housing, today it’s gay marriage (in a 5-4 decision which should have been wider). Great stuff, and a rebuke to the Ken Cuccinellis, E.W. Jacksons, and others (e.g., a lot of the people who showed up at last night’s Fairfax County School Board meeting) who continue to live in the intolerant past, while the country moves ahead despite of them. Also, congratulations to Virginia AG Mark Herring, who has done superb work on this issue, in spite of brain-dead attacks by homophobes/right wingnuts against him. Here’s a key phrase from the SCOTUS ruling:

No union is more profound than marriage, for it embodies the highest ideals of love, fidelity, devotion, sacrifice, and family. In forming a marital union, two people become something greater than once they were. As some of the petitioners in these cases demonstrate, marriage embodies a love that may endure even past death. It would misunderstand these men and women to say they disrespect the idea of marriage. Their plea is that they do respect it, respect it so deeply that they seek to find its fulfillment for themselves. Their hope is not to be condemned to live in loneliness, excluded from one of civilization’s oldest institutions. They ask for equal dignity in the eyes of the law. The Constitution grants them that right.

By recognizing the constitutional right of all people to marry the person they love, the Supreme Court has guaranteed that, across the country, same-sex couples will have their relationships treated with the full legal dignity and respect that they deserve. With our country’s fundamental ideal that ‘all men are created equal’ in mind, I welcome the end of discriminatory bans that have, until today, denied same-sex couples the privileges, responsibilities, and joys of marriage. This is an important step on our continuing quest to create a more perfect union.