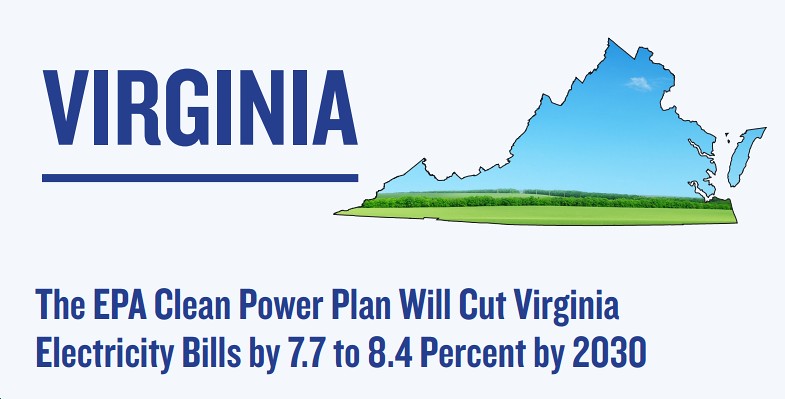 If you listen to the gloom-and-doom, sky-is-falling stories by the fossil fuel industry (the same Big Lie guys who have had a “deliberate campaign to deceive the public” on climate change going for several decades now, and obviously should never be believed or listened to on ANYTHING they say), the upcoming EPA Clean Power Plan will cause electric rates to skyrocket, devastate our economy, crush Western Civilization as we know it…ok, slight exaggeration on that latter point, but not much based on the fossil fuel industry and climate science deniers’ wildly over-the-top rhetoric In short, it’s akin to the tobacco industry, but far more dangerous in this case, and also to the auto industry, which for years claimed (utterly falsely) that every new innovation – seat belts, air bags, catalytic converters, fuel economy standards, you name it – would devastate their industry. Again, the question is why does anyone listen to industries which have strong economic incentives to lie through their teeth? The expressiong, “Fool me once, shame on you; fool me twice, shame on me” comes to mind.

Anyway, right now the battle is over the EPA’s Clean Power Plan, a modest effort (far too modest based on the urgency of what needs to be done) to increase energy efficiency and clean energy, while cutting carbon pollution from existing coal-fired power plants. You’d think this would be utterly noncontroversial, other than among scientists and people who care about the environment who demand much STRONGER, more AMBITIOUS standards. But noooooo. Instead, we are subjected to propagandistic trash like this from Virginia’s corporate-owned-and-operated State Corporation Commission (SCC) – one of the most powerful Virginia “regulatory” bodies (in theory, at least) most people have never heard of – attacking the Clean Power Plan in hysterical language that insults all of our intelligence, not to mention calling into question why any SCC commissioner (or staffer who participated in pushing out fossil fuel industry talking points while pretending their report was apolitical, policy neutral, blah blah blah lie lie lie) is still employed at the SCC. 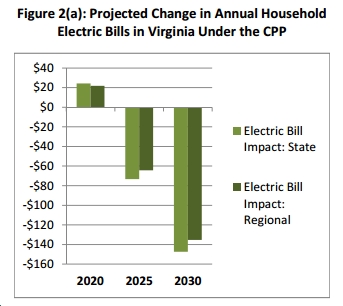 Fortunately, a new report by Public Citizen, “CLEAN POWER, CLEAR SAVINGS,” is out this morning, and its top conclusion completely demolishes one of the Big Lies put out by the fossil fuel folks and their allies at the SCC, etc. That Big Lie, of course, is that the CPP will raise Virginia power consumers’ bills. To the stark contrary, as this report finds, “by 2030, electricity bills will be 7.7 to 8.4 percent lower under the Clean Power Plan, saving the average Virginia household $135 to $147 annually.” That’s right, SAVING us money…all while moving us to a cleaner,  more prosperous, more sustainable energy economy.

But wait, you ask, how can switching to clean energy save us money on our power bills? Several reasons.

1. “Improving energy efficiency means using less electricity to do the same or more work… For this reason, even if the retail price of electricity increases modestly under the Clean Power Plan, households and businesses will use substantially less electricity due to efficiency measures, and their bills will still decline.” I’d add that energy efficiency is by far the cheapest form of energy out there – “negawatts,” or the energy you never have to use in the first place, being a LOT cheaper than building new power plants (particularly super-expensive nuclear power plants), transmission lines, pipelines, etc.

2. “The net effect is that thanks to efficiency

3. Actually, “this report likely underestimates the potential savings under the Clean Power Plan” because “it relies on EPA’s excessively high estimates of the cost of efficiency programs” (the EPA, for whatever reason, “starts its analysis by treating efficiency measures as 60 to 100 percent more expensive than the evidence indicates”).

4. It’s also worth emphasizing that “actual outcomes will depend on Virginia’s policy choices.” In other words, if Virginia’s Dominion-owned-and-operated General Assembly were to declare independence from their paymasters and put in place smart energy policies (decoupling, net metering, a strong/mandatory Renewable Portfolio Standard, a price on carbon and other pollution, etc.), the benefits to Virginia could be far, far greater than if they keep mindlessly doing what Dominion et al want them to do.

Finally, I’d toss in the charts by Lazard indicating how cheap clean energy (particularly efficiency and onshore wind, but increasing utility-scale solar as well; see Buffett strikes cheapest electricity price in US with Nevada solar farm — an amazing 3.87 cents per kilowatthour, vs. about 9 cents per kilowatthour in Virginia). And remember, the price of fossil fuels and fossil-generated electricity does not include the enormous health and environmental costs stemming from their production, processing, transportation and combustion. On the other hand, the price of fossil fuels and fossil-generated electricity DOES benefit from huge implicit and explicit federal and state taxpayer-funded corporate welfare (aka, “subsidies”) to those fuels, far greater by orders of magnitude than anything clean energy has received over the decades. In sum, the Clean Power Plan is not nearly as ambitious as it should or could be, but it’s at least moving in the right direction for Virginia’s economy and environment. As this study shows, it even ends up lowering Virginians’ power bills.

State Sen. @SSurovell knows what he's talking about, unlike "moronic or intentionally misleading" Glenn Youngkin, who clearly knows NOTHING about state government - having never served in (or shown any interest in) elective office... https://bluevirginia.us/2021/09/saturday-news-un-warns-of-catastrophic-pathway-with-current-climate-pledges-fda-panel-recommends-pfizers-covid-booster-doses-for-people-65-and-older-death-pan#comment-5539385910