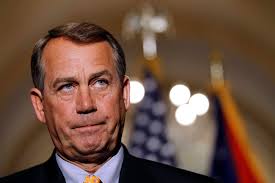 So, Day One: we see John Boehner in the picture while the Pope speaks to Congress, calling on them to act honorably as leaders for the good of the people.

Next morning: John Boehner announces he will not only step down as Speaker but resign from Congress– in a month!

Do you suppose the Pope’s exhortation to do just the opposite of what he and his caucus have been doing was just too much for him to bear?

NOTE: I do not mean this seriously. I’m guessing that the Speaker, in danger of being ousted, has done a “You can’t fire me, I quit” move.

This also maybe a signal he’s about to do something that will strengthen such a challenge, and perhaps help seal his doom anyway as Speaker.

Specifically, Boehner’s resignation may mean that he is planning on defying the nihilistic part of his caucus by violating the noxious Hastert Rule, by which Republicans only allow a vote on measures that are supported by a majority of the majority.

He may be about to avoid a government shutdown by allowing a vote on a measure to fund the government that will use Democratic votes to get it passed.

That would anger the crazies who specialize in futile and destructive gestures and who now are eager to shutdown the government for no good reason, as part of their ongoing unwillingness to accept the democratic process, according to which one has to accept that other people have power and one cannot always get one’s way.

This is the group that has specialized in blackmail, depending on the other party to cave to demands out of a concern for the good of the country that they themselves consistently fail to show. (Think debt ceiling.)

(But the Democrats stopped giving in to blackmail a few years ago, so this attack on Planned Parenthood accomplishes nothing– hence the nihilistic nature of that part of the Republican Party.)

And if indeed Boehner is planning to pass a clean budget to keep the government operating, he may figure that will sufficiently strengthen opponents of his speakership that he might as well avoid a losing battle and resign.

In this way, Boehner may be actually sacrificing to advance the runner, taking one for the team, falling on his sword, and otherwise acting with an element of nobility not normally associated with this Speaker of the House.