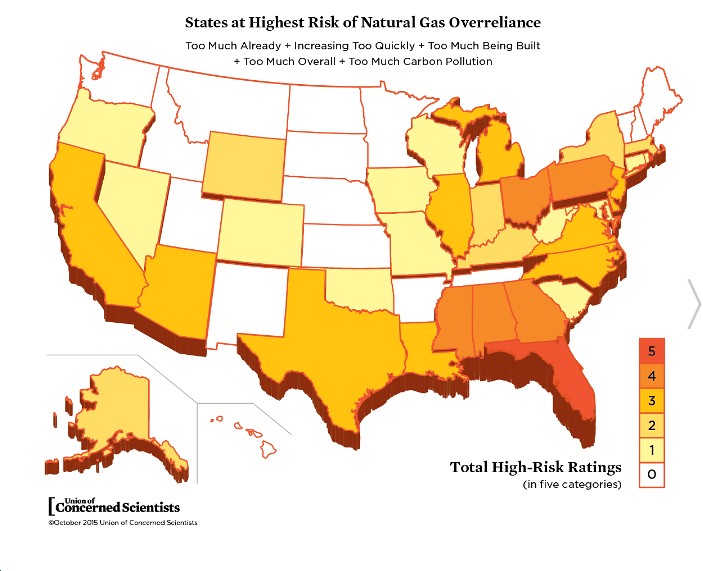 You might have noticed Dominion Power, Gov. McAuliffe, and other FODPs (“Friends of Dominion Power”) pushing Virginia to increase its reliance on natural gas. I’ve long argued that this is a really bad idea, for a number of reasons: economic, environmental, much better options (first and foremost, energy efficiency, the cheapest source of energy by far; also increasingly inexpensive solar power, onshore wind and offshore wind) available, etc. Yet Dominion and the FODPs continue to push ahead with their gigantic, and gigantically foolhardy, “Atlantic Coast Pipeline” and other boondoggles.

Now, a new analysis by the Union of Concerned Scientists (UCS) provides additional ammunition for those of us who believe increasing Virginia’s reliance on natural gas is wrong on almost every level. A few key points from the UCS analysis include:

So what should we be doing instead of ramping up our already-too-high reliance on natural gas? As the UCS writes, “smart state policies would ensure that natural gas plays a supporting role in reducing global warming pollution instead of a central one.” Ergo, the answer: “expanding renewables and efficiency gives consumers better odds and leads to deeper carbon reductions.” So, the UCS asks, “what’s it going to be? Will your state play its cards right?” In the case of Virginia, right now the answer to that question largely – and unfortunately – appears to be a resounding “no.”