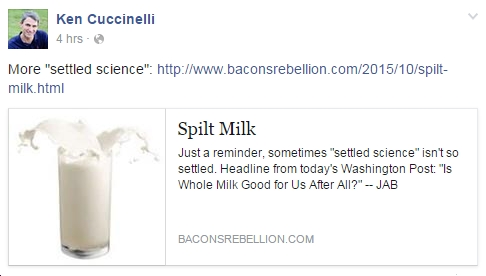 I mean, we all know that Ken Cuccinelli has been a climate science denier and – not coincidentally – tool of the fossil fuel industry, basically forever. And we also know that Cooch’s willful ignorance when it comes to climate science, even persecution against great climate scientists like former UVA Professor Michael Mann, knows no bounds. But this latest line of “reasoning” (using that word extremely loosely) — arguing that since there are new indications regarding the possible health impacts of milk fat in our diet, that this clearly means NO science is ever “settled” and that we can ignore whatever we want to ignore, apparently – really hits a new low in terms of dishonesty and/or just plain stupidity.

I mean, by this utterly brain-dead “reasoning” (again, using that word extremely loosely), I guess if a few scientists argue that the world is actually flat, or that the earth doesn’t really revolve around the sun, or that they don’t “believe” in evolution (one of the greatest scientific theories ever, with voluminous evidence supporting it), etc., then we can all just throw up our hands and say, “oh well, I guess we can’t know ANYTHING at all. That includes the massively well-supported scientific evidence behind: a) the greenhouse effect; b) the impact of increasing greenhouse gases in the atmosphere on said greenhouse effect; and c) the absolutely clear, definitive case that human burning of fossil fuels has increased greenhouse gas concentrations in the atmsophere and driven rapid global warming. But no, go ahead ignore all that and point to something about milk fat, mock the whole concept of “settled science” and spew CO2 into the atmosphere and oceans forever, trashing the only home we have in the process. Sounds like a great plan, huh?

P.S. Sure, in searching the internet, I see that only the most diehard of the climate science deniers – basically all on the far right and/or paid by the fossil fuel folks – are pushing this crap. But still ,given that THEIR PARTY is in control of the U.S. Congress (note: with the current disarray among House Republicans, “in control” might be somewhat of an overstatement, but they certainly are causing huge problems for our country and our entire planet) and many state legislatures, I find that highly disturbing.