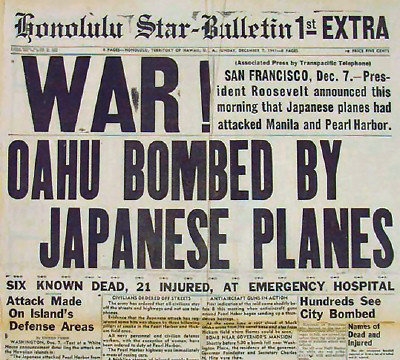 
Roanoke’s mayor, David Bowers, made national news yesterday — in an undesirable way – with his comment that ““I’m reminded that President Franklin D. Roosevelt felt compelled to sequester Japanese foreign nationals after the bombing of Pearl Harbor, and it appears that the threat of harm to America from Isis is just as real and serious as that from our enemies then…”

Most of the (justifiable) criticism has concerned the first part of that quote, with its endorsement of one of the most shameful episodes of American policy in that period (piled on top of a major historical inaccuracy — it was American citizens, not “Japanese foreign nationals” who were rounded up into concentration camps).

But it is the second part of that sentence – comparing the threat from Isis with the threat we faced in World War II – that deserves more attention than it has gotten.

The threat we face now is nowhere near comparable to the threat represented by the attack on Pearl Harbor. Japan was a nation-state that possessed a powerful military composed of an Army that had already brought most of Asia under its domination, as well as a Navy and airpower that had just destroyed much of the Pacific Fleet of the United States. Japan was also in alliance with a still more militarily powerful nation-state – Nazi Germany – that already was in control of almost all of Europe, and that soon thereafter declared war on the United States.

The threat of the injury that ISIS might inflict is not nothing, but it is nowhere near as “real and serious” as the danger we faced in World War II.

This distinction matters hugely – at least as much as the ugly xenophobic political posturing that is going on – because we are in danger of making the same disastrous mistake we as a nation made, under George W. Bush, in the aftermath of 9-11. Our over-reaction then did incalculable damage to the nation and to the international order. And what a shame it would be if we failed to learn the lesson from that error.

Quoth Paul Krugman about Jeb Bush’s declaration that “this is an organized attempt to destroy Western civilization.”

No, it isn’t. It’s an organized attempt to sow panic, which isn’t at all the same thing. And remarks like that, which blur that distinction and make terrorists seem more powerful than they are, just help the jihadists’ cause.

And he goes on to say, “the biggest danger terrorism poses to our society comes not from the direct harm inflicted, but from the wrong-headed responses it can inspire.”

It is a blunder to make one’s enemy “more powerful than they are.” And it’s not only the politicians. It is not a service to this nation for the news media, for example, to go into round-the-clock coverage of the Paris attacks, as if their importance obliterates all the other vital matters transpiring in our world. (Like the El Nino that dwarfs all previous El Ninos, and gives still more illustration of the oncoming disasters that climate disruption is strewing in our path).

When did we become such a fearful nation? Can we Americans still get a grip?

Back in World War II, in the aftermath of Pearl Harbor there were a great many very dark times, both in the Pacific and in the European/North-African theaters. For the most part, under the leadership of FDR, the nation did not lose its poise. (The dispossession of 120,000 Japanese Americans was an exception to that picture of equanimity.)

President Obama, like FDR, is leading with poise in the aftermath of a frightening attack. We should know by now that the Republicans, by and large, will engage in fear-mongering. It is up to the rest of us – the citizenry, and the news media – not to be stampeded into exaggerating the danger and making unwise decisions in our panic.