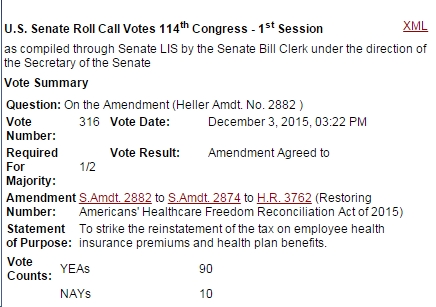 I’m not a big fan, generally speaking, of the Washington Post’s editorial page, but today’s editorial on the so-called “Cadillac” tax nailed it.

AFTER DECADES of intolerable coverage gaps and seemingly uncontrollable cost increases, the country’s health insurance system is moving toward resolving both issues. Thanks in part to the Affordable Care Act, only 11.6 percent of adults lack insurance, according to the Gallup Organization, as compared with 14.6 percent before the Great Recession. Health spending as a percentage of the economy, meanwhile, held steady at 17.5 percent from 2009 through 2013, according to the federal government. Cost-growth resumed in 2014 , driven partly by expanded coverage and partly by short-term drug-price hikes, but the increase was in line with forecasts and even a tad more modest than expected.

You’d think there’d be no way the Senate would even consider doing away with a law that would help keep the favorable momentum going. You would be wrong: On Thursday, 90 of 100 senators voted to repeal the Affordable Care Act’s most important coverage-expanding, cost-controlling provision. We refer to the 40 percent excise tax on the value of employer-paid health plans that exceeds $10,200 for individuals or $27,500 for families, which is scheduled to take effect in 2018.

So why did 90(!) Senators vote to kill this “most important coverage-expanding, cost-controlling provision” in the Affordable Care Act (ACA), the so-called “Cadillac tax” on gold-plated, super-expensive health plans? Very simple: as the editorial explains, Republicans would oppose anything with President Obama’s name on it, suffering as they do from a severe (fatal?) case of “Obama Derangement Syndrome.” But what about Democrats? Why did all of them but seven — including both U.S. Senators from Virginia, Tim Kaine and Mark Warner — vote with the Republicans on this? Again, very simple: the unions oppose it (wrongly, IMHO), and the Democrats caved, especially since this bill is going nowhere anyway.

Anyway, I’ve got to say I was pleasantly surprised to see both Senator Warner and Kaine vote the right way on this one – kudo! I checked with Senator Kaine’s office to better understand his thinking on his vote, and I completely agree with him that repeal of the “Cadillac tax” would harm the ACA by depriving it of an important funding source. Sure, go ahead and reform/improve the “Cadillac tax,” but certainly don’t kill it; that makes no policy sense whatsoever.

P.S. For a great explanation as to why the “Cadillac tax” makes so much sense on so many levels, see Don’t Repeal the Cadillac Tax by Ezekiel Emanuel and Bob Kocher in the Oct. 2, 2015 edition of the New York Times). Among the key reasons: repealing it would cost tens of billions of dollars; it would be regressive; it could lead to more health care inflation.

Sen. @MarkWarner on the Integrity of Our Elections (Warner: Trump "should not be aiding and abetting foreign adversaries who are working to sow doubts about the legitimacy of the American election system") https://bluevirginia.us/2020/09/sen-mark-warner-on-the-integrity-of-our-elections

Freitas now spewing out wild, insane lies, such as that "we are not the party with a history of voter suppression in this country." In fact, voter suppression has been a cornerstone of the Republican's electoral strategy for decades now! https://bluevirginia.us/2020/09/nick-freitas-r-bashes-unemployment-insurance-paid-sick-leave#comment-5083629136 @vademocrats