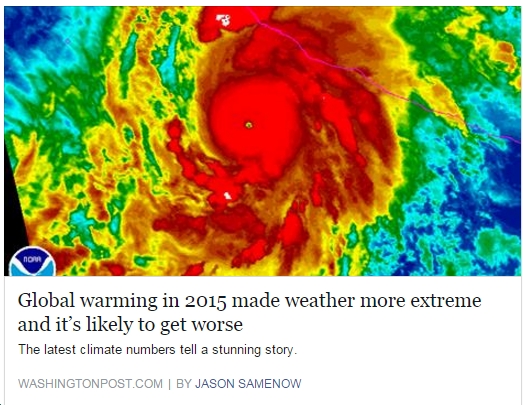 
I’ve been critical of the Washington Post’s “Capital Weather Gang” and other local-area meteorologists for twisting themselves into contortions to avoid connecting the dots between increasingly extreme weather patterns and events, year-in/year-out, and global climate disruption.

The bottom line: at this point, in light of so many droughts, super-storms, and the hottest year in history (by a wide margin), there’s absolutely no excuse for meterologists to plead ignorance of the interaction between climate and weather (and yes, denier tools, those are different concepts!). Which means that if a meteorologist is NOT taking man-made climate disruption into account in their weather forecasts, they are simply not doing their jobs. Just as importantly, if a meterologist – particularly prominent ones, like local TV weatherpeople Doug Hill, Topper Shutt, Amelia Segal, etc. – as well as some of the folks Jason Samenow works with at the Capital Weather Gang, aren’t informing their viewers on a regular basis about the links between climate disruption and weather patterns, they are doing a huge disservice to those viewers and the broader public.

Honestly, I can’t even think of a legitimate excuse for failing to do so, as ignorance is certainly not plausible at this point. So, what’s holding these prominent meteorologists back from doing the job they need to be doing? Orders from management not to discuss this “controversial” (in quotes because it most certainly is NOT controversial among scientists) topic? Fear of climate-science-denying viewers flooding their email inboxes with crazed vitriol? Other?

Anyway, given that context, I think it’s important to praise meteorologists when they do the right thing, clearly drawing the link between climate change/disruption and weather patterns. This morning’s Washington Post opinion piece by Jason Samenow is a superb case in point. The bottom line points:

So there’s the deal. If meterologists truly are *shocked* at how man-made climate disruption is turning weather extreme, then they need to not keep that a secret! To the contrary, they should be shouting at the top of their lungs, every single day pretty much, and informing the public of the catastrophe that’s unfolding. Certainly, they should not be doing what I saw on local newscasts in December — making the record warmth seem like a big joke (“hahaha, people in shorts in late December, isn’t that hilarious!!!!!”). Far from being a joke, let alone a big one, this is deadly serious stuff, and frankly if newscasters can’t or won’t convey that, they should be replaced by people who can and will.

P.S. For examples of the Capital Weather Gang at its worst, see Shhh … when it comes to #weather/#climate links, nothing to be seen here (@WashingtonPost edition). Also see Start saying everything is related to #climate change. Just start it..