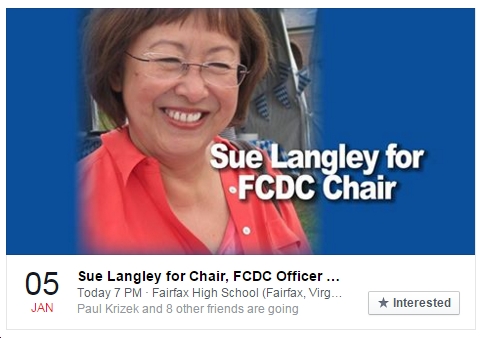 Sue Langley has been Fairfax County Democratic Committee (FCDC) Chair for the past two years and is up for another two-year term at tonight’s FCDC meeting at Fairfax High School. For a number of reasons, I’d argue that Sue has done an excellent job and very much deserves reelection.  Here’s a sample of what FCDC’s been up to under Sue’s leadership, from the December 15, 2015 “State of the Committee” update.

The state of the Committee is strong. When projecting our 2015 membership, FCDC estimated we would sign up 600 members in the reorganization. I am pleased to report that we exceeded that target by 10 percent with 665 members filed, and we have not even begun our two-year recruitment drive. With the Presidential and Gubernatorial years ahead of us, we are in a position to surpass the 805 member record we set in the cycle currently ending.

The Committee finances are solid. Last year we had a robust program that contributed to wins up and down the ballot. Our team raised all the funds needed to execute the program without having to cut a dime.

Following Sunday’s fundraiser, we have in excess of $80,000 on hand to fund FCDC operations. Before the fiscal year ends on March 31, 2016, we have two fundraisers and have a direct mail piece scheduled. As a result, we will likely start our fiscal 2016 fundraising with over $100,000 cash on hand. In fact, FCDC’s fundraising going into the 2016 cycle is nearly three times the Fairfax County Republicans and ranks us in the top five Democratic County Committees in the country. [Source: Open Secrets]

Impressive. Sue also has a strong vision for 2016 and beyond, including: precinct operations, voter registration, early voting, fundraising, campaign coordination, new member orientation, and much more. Bottom line: if you’re a Fairfax County Democrat, head over to the Fairfax High School Cafeteria (3501 Rebel Run) at 7 pm tonight and cast your vote for Sue Langley for Chair. Thanks.