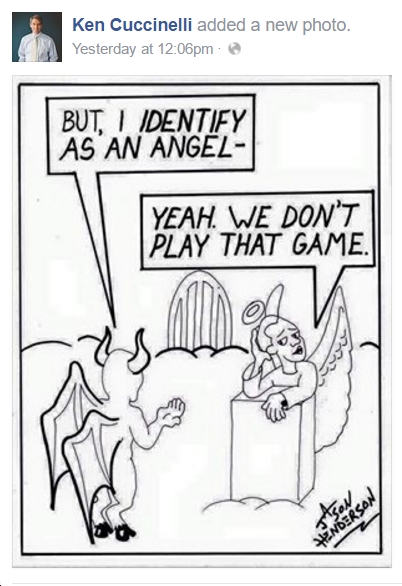 Over on his Facebook wall, where he posts crazy stuff all the time, 2013 Virginia GOP gubernatorial nominee – and possible 2018 U.S. Senate candidate? – Ken Cuccinelli is out with his latest wit, wisdom and “humor.”

In this case, Cooch is mocking the concept that someone’s gender identity can “[differ] from the sex the doctor marked on their birth certificate.” Instead, Cooch thinks it’s all a big “game.” Or even worse, he thinks (like E.W. Jackson and others of Cooch’s ilk) that it’s demonic; note that it’s the devil (the stand-in for a transgender person) identifying as an angel (the stand-in for a non-transgender person) in the cartoon?.

All this ignorance and bigotry, despite scientific evidence (something Cooch truly hates, whether it’s climate science or the science of human sexuality, gender, etc.) that “the weight of [brain imaging and other scientific] studies…points strongly toward a biological basis for gender dysphoria.” Also note that, far from being a “game,” ignorance of and discrimination against transgender people is a deadly serious issue: