Dave Brat does not appear to have the bal…well let’s just say the manly spirit to face up to his opponent Eileen Bedell in public.  Brat has turned down every one of the numerous offers to let the voters in VA-7 see him and Bedell on the same stage.  Just last week he refused the invitation of the University of Richmond, with the College Republicans and College Democrats as co-hosts, to take part in a debate on its lovely campus.  UR had offered him a choice of three dates (not two, as in the Richmond Times-Dispatch article), but he said he was too busy.

Really, Dave?  REALLY??!!!  Are you kidding me?  Too busy to engage in the democratic process?  Too busy to DO YOUR JOB?  So, wassup?  Let’s see…Congress isn 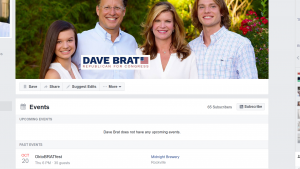 ‘t in session, so it can’t be that.  Perhaps you’ve got other campaign events?  OK, let’s go look.  NO!  You’ve got NOTHING on your Facebook page or webpage after the third week of October.  Sounds a bit lonely, Dave.  Having trouble rounding up support after two years in which you’ve accomplished ABSOLUTELY NOTHING but rankle your Republican colleagues?

“Brat has now been in Congress for almost two years.  At some point, even he is going to have to look around and wonder what he’s doing there.  He’s accomplished nothing.  He has no friends or natural allies, just those who tolerate him.  He’s not respected.  None of the things he ran to do – stop the runaway spending, reform immigration, or the like – are anywhere close to being accomplished.”

So, what ARE you up to these days?  Maybe you’re busy promoting your BOOK!  You spent all summer doing that, appearing on countless TV and radio shows.  Funny thing is, you’re following right in the footsteps of your old arch-enemy, Eric Cantor, who preferred book-peddling to debating.  But unlike Cantor, YOU attack fellow Republicans in your book and then crow about your high principles.  RIGHT!

Are THESE the principles that led you to take money from, endorse, and support the most despicable person any living American has seen run for President?  If they are, you are a man of easy virtue, very easy,  bought by the money and support of Trump and the filthy white nationalist circles revolving around you both.

So, Dave, I can see why you wouldn’t want to stand up on your hind legs and defend a do-nothing, white nationalist-serving record, especially against a smart kick-ass woman like Eileen Bedell, who sees the game you’re playing and is READY to take you on.  Don’t blame you a bit.  I’d be intimidated, too, especially if I were so deficient in the manly…ummm… spirit department.

To learn more about Eileen and to help her rid Congress of Dave Brat, click:

A special thanks to Tom and Jerry Screen Captures Blogspot for the featured image of Fraidy Cat.