All of the Trump campaign’s emails are delusional to varying degrees, but the latest one takes the cake. Check this out: 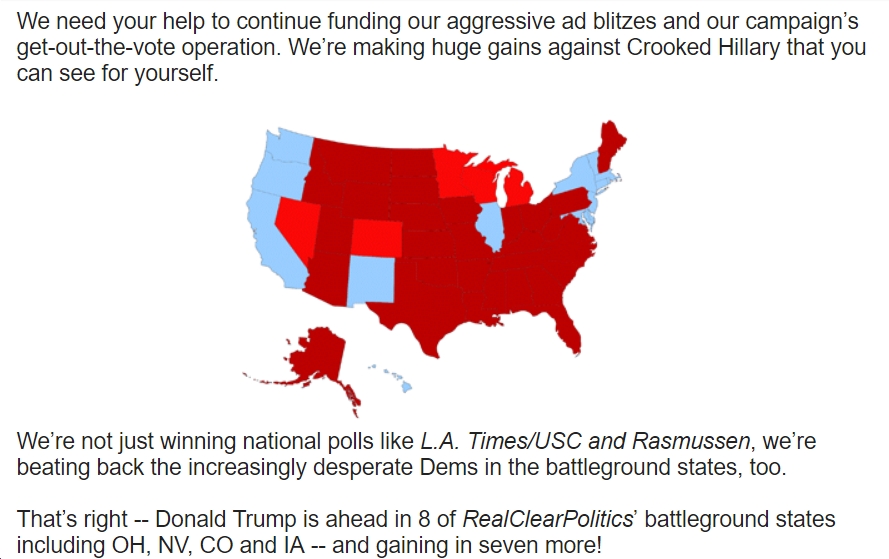 First off, the Trump campaign most certainly is NOT “making huge gains” against Hillary Clinton. To the contrary, the latest at FiveThirtyEight has Clinton’s chances up to 90.3% in the “Now-Cast” this morning; the Princeton Election Consortium has Clinton’s chances at 95%-97%; and the NY Times has Clinton up to an 88% chance of winning. Note that these are all major “gains” – but in the exact opposite direction of what Eric Trump and the rest of the Big Liars at Trump HQ are laughably, falsely claiming.

Second, Trump is NOT winning even with heavily Republican-leaning Rasmussen, whose latest poll has CLINTON up 4 points. As for the LA Times/USC, that’s not a real poll, plus it’s a piece of crap and a massive outlier which makes no sense at all, but even THAT ridiculous thing has it at 44.4% Clinton-44.0% Trump this morning. So that’s utter bull**** by the Trumpsters as well.

Third, Trump is not – repeat, NOT! – ahead in “8 of RealClearPolitics’ battleground states including OH, NV, CO and IA.” To the contrary, Clinton’s up in Ohio (+0.5 points), Nevada (+1.4) and Colorado (+7.3 points). And keep in mind that RealClearPolitics leans right; other poll aggregators show Clinton up even more in those states.

Finally, and most laughably, check out that map the Trump Big Liars use in their email, and note all the red? Why is that? Because – and of course they don’t mention this! – this is a hypothetical map done by FiveThirtyEight.com (see below) if “just men voted.” Fortunately, women vote as well – in larger numbers than men – and Clinton is annihilating Trump (458 electoral votes-80 electoral votes) among them. Put it all together, and Trump’s losing “very badly,” as he might say, and it’s truly “sad!” Well, that is, it’s “sad” unless you’re anyone who wants America to remain great, let alone a Democracy, after this election… 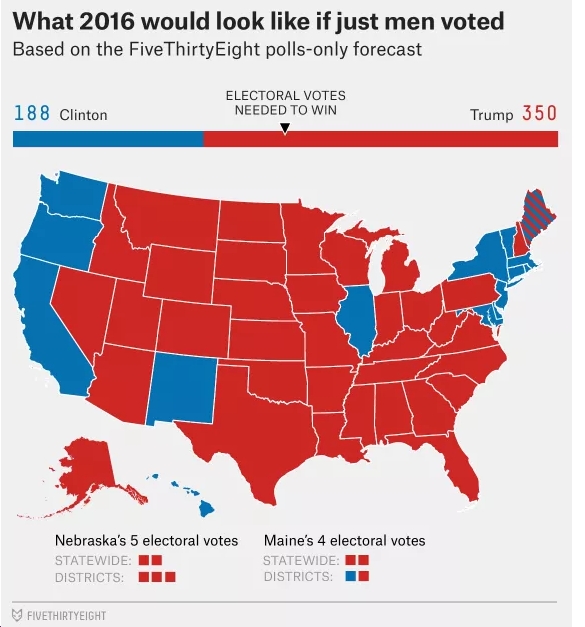