Trump’s return to one of the nation’s wealthiest areas, which he said back in August was “failing”, creates a last-minute suspense item for the tight Virginia 10th Congressional District contest between the GOP’s Barbara Comstock and the Democratic Party candidate, LuAnn Bennett.

Where will Barbara be this evening?

While Comstock has sought to distance herself from Trump, including a last-minute denunciation of him after months of his hateful and deceitful campaigning as the GOP nominee, there is a reality on the ground her in Virginia’s 10th CD. 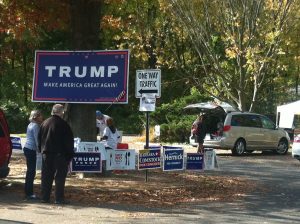 This evening, Donald Trump will be in Virginia’s 10th Congressional District.