In response to the news that Carrie Fisher had died, Steve Martin shared on Facebook the vivid memory of the impact Ms. Fisher had had on him nearly forty years before (presumably when he’d seen her portraying Princess Leia in the first Star Wars movie).

“When I was a young man, Carrie Fisher was the most beautiful creature I had ever seen,” Martin began.

As has been widely reported, Steve Martin’s tribute was publicly attacked by some as “sexist.” “Remember Carrie Fisher for her talent, her feminism, her commentary on mental health,” New York Magazine wrote, “— not for the way she looked.” A Twitter user’s comment captured the essence of these attacks: “”Seriously @SteveMartinToGo quit being such a jerk for thinking Carrie Fisher was beautiful and saying so on the occasion of her death.”

Although Steve Martin had his defenders, nonetheless, in the face of the attacks, he retreated and deleted his posting.

More needs to be said about how wrong-headed are those attacks.

Let me begin by acknowledging that women have much to complain about the manner in which men relate to them regarding their looks and their bodies. And they have much to complain about how men fail to relate to them— as full human beings worthy of respect. Particularly in the aftermath of an election to the presidency of a man we have heard boasting of sexually assaulting women, the injured feelings of women whose humanity has been denied and abused warrants acknowledgment and consideration.

So the following is not intended as a counter-attack on those women who, triggered perhaps by his rhapsodic comment about Carrie Fisher’s beauty, attacked Steve Martin. It is, rather, an attempt to clarify what there is in men’s response to womanly beauty that deserves to be honored, not condemned.

“Carrie Fisher was the most beautiful creature I had ever seen.” One can hear a fullness of heart in Steve Martin’s statement. He is recalling an experience of inspiration—a breathing in of spirit in response to something that touched him deeply, a pleasurable recollection of being moved by beauty.

I imagine most men can identify with that appreciation of womanly beauty. And it’s a good thing that we are that way. That response is deeply wired into our nature. It is a response that has for eons been life-serving, and life-enhancing.

The evolutionary process that has shaped us has seen to it that, by nature, we feel the feelings that help keep us alive and serve to pass our form of life forward into the future. It is good that the male human is moved, as Steve Martin was, by the perception of female beauty. That is no small part of how it has come to pass that there are people on this earth.

It has been well-established scientifically that what the human male finds beautiful in the human female is correlated with health, fertility, and advantageous genetic endowment. The perpetuation of life is vital business, and it is life-serving for us to appreciate what will help us continue our kind.

Appreciation of this sort connects with our fundamental being at a level way deeper than our liking someone’s “commentary on mental health.” That sort of thing can be real, but it is most unlikely to produce a memory that is still resonant forty years later.

Steve Martin was accused of responding to Carrie Fisher purely in physical terms. But I doubt that’s true at all. We humans do not just mate, we also form relationships as lovers. We are wired not just to produce offspring, but also to form families that can nurture our offspring through their prolonged period of dependency. Heart and soul are also involved, and when we see one another, we see more than just the purely physical.

Carrie Fisher was a woman of real spirit, and that quality of her being was entirely visible in her portrayal of the highly spirited character, Princess Leia. I would wager that when Steve Martin found Carrie Fisher beautiful, he was responding also to that spirit.

That was certainly the case the moment I first met my own beloved, April, more than thirty years ago. As she walked toward me on that afternoon in Rock Creek Park in Washington (on April 21, 1984), I saw her physical loveliness. (Not beauty-queen beautiful, but certainly pleasing to the eye even at that level.) But what captivated me immediately was a beauty that was both visible and at the level of the spirit.

Here’s how I put it two and a half years later, in the vow that I’d composed for our wedding. Describing her eyes as “like an open blue sky,” I said, “I saw in that first moment that your face is a clear window of your brave and beautiful soul.”

I continue to be moved by that beauty at moments that are, thankfully, not at all rare. Indeed, the moments that I’ve been most deeply moved by womanly beauty have been in recent years with April, who is now in her sixties. It is part of what I call “the sacred space of lovers.” And the experience of the heightening of my perception of such beauty illustrates the wisdom in the question asked by that old song: “Do I love you because you are beautiful? Or are you beautiful because I love you?” 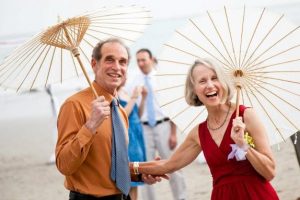 The connections between the perception of beauty and the feeling of the open heart are complex. Steve Martin, I imagine, was not coming from any less-than-human “sexist” place in his perception of Carrie Fisher. I imagine that, back when he was a young man and he saw that beauty, had Steve Martin been given the opportunity to sit across the table from the young woman he had appreciated, he would have treated her as endearingly as he knew how to. If “sexism” implies some sort of lesser treatment, I doubt how he beheld Carrie Fisher would have been sexist in the least.

Men are supposed to appreciate women, and it all begins with first sight.

I am still moved also by the beauty I see in other women. Experiences of beauty – in general – are important to me. I am moved by the beauty of the music of Bach and Mozart. Moved, too, by the sight of the trees’ spring leaves emerging in the valley and ascending the slopes toward our house on the ridge. But nothing moves me more profoundly than womanly beauty, and the way movie stars are cast suggests that looking at such beauty is a pleasure that is pretty nigh universal.

I’m sure Steve Martin would affirm that his memory of seeing that “most beautiful creature” is a pleasurable one. Beholding womanly beauty is pleasurable for the men I know, and thus this response is life-enhancing as well as life-serving.

It does not diminish in the least that sacred space between April and me that I appreciate womanly beauty wherever I see it. As I see it, our being lovers is more than just a connection between her as a specific human woman and me as a specific human man. It is also a representation of that ancient reality of woman and man coming together in love, as lovers.

As Leonard Cohen put it in his song, “That’s No Way to Say Good-bye”:

I love April not only for being her, but also for being the embodiment of Woman in my life. Did I not appreciate “woman,” I’d appreciate April the less.

That a man should respond to the beauty of woman is a sign of life’s flowering in him. Just as I would wish for every man to see in his beloved some substantial piece of the beauty that Steve Martin saw in Carrie Fisher, so would I wish for every man the capacity to see representatives of such beauty in the world around him.

The love of womanly beauty, and of the beautiful qualities that can be conveyed in that visible beauty, partakes of the sacred in the human realm.

Steve Martin’s recollection of Carrie Fisher’s beauty deserves to be celebrated, not silenced..

Andy Schmookler, who has spent the past dozen years warning about the destructive force that has been rising on the American right, will launch this spring a new series—not on the brokenness, but on a dimension of wholeness — with the title, “The Sacred Space of Lovers.”