Look, I understand that the folks at VPAP – the Virginia Public Access Project – do some excellent work (e.g., their visualizations and their election returns), and that to do that work they need to raise money. I also understand that much of VPAP’s money comes from…well, some people who are not exactly about “public access,” “transparency” or “sunshine.” For instance, 2016 donors to VPAP included some of these fine corporate citizens: Verizon, Dominion (of course!), Altria (aka, Philip Morris), Comcast, the Virginia Automobile Dealers Association, Smithfield Foods (pretty much the worst of of the worst, whether you care about the environment, humans or animals), McGuireWoods Consulting (aka, Virginia’s “shadow government”), Appalachian Power Company (coal-fired polluters), etc.

Again, these are not exactly paragons of “public access” — to put it mildly. To the contrary, as the recent book Virginia Politics & Government in a New Century: The Price of Power (by Jeff Thomas) explains, these companies’ donations to Virginia politicians are all part of a “legally corrupt” system that is based on “pay to play”/purchasing access, “revolving door,” crony capitalism run amok, etc.

Now, I’m certainly not arguing that VPAP is in the same league as the Virginia General Assembly or Virginia executive branch agencies, both of which have been blatantly “captured” by big corporate money and wealthy individual donors. Still, I had to laugh when I saw some of the folks VPAP is honoring as part of what it’s calling its – hahahahaha – “Sunshine Caucus.” 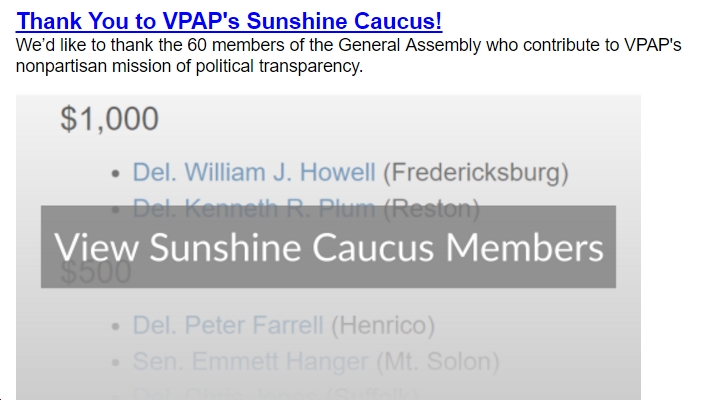 Just to list a few folks who are among the LAST people I’d ever think of as supporting “sunshine,” transparency or good government, how about: Virginia House Speaker Bill “ALEC” Howell, who pretty much epitomizes “legalized corruption” and “pay to play” politics at its fetid worst; Del. Peter Farrell, who – as Jeff Thomas explains in his book – is the son of Dominion CEO Thomas Farrell and the nephew/godson of McGuireWoods Chairman Richard Cullen, basically handpicked for the Virginia House of Delegates, no stinkin’ democracy required; Senate Majority Leader Tommy Norment, literally caught in bed with a lobbyist and also the guy who launched a “premeditated, punitive” “assault” on the Virginia Statehouse press corps last year; Senate Minority Leader Dick Saslaw, who has argued that ethics laws are unnecessary and irrelevant; etc, etc.

I mean, I could go on all day with this, but those examples give you a flavor for who comprises VPAP’s “Sunshine Caucus.” The only question is whether VPAP was aware of the irony and shark-jumping absurdity of putting these polar-opposite-of-sunshine donors in a “Sunshine Caucus.” More likely, VPAP simply didn’t want to offend its donors, even if said donors are as far removed from VPAP’s mission (“Because Virginia’s ethics laws rely on disclosure, it is imperative that citizens have easy access to public documents related to money in politics.”) as it is humanly possible to be.