Taking a break from my usual data posts about any given House of Delegates seat in Virginia to take a look at the special election taking place for the Prince William County Clerk of Courts race.

Those of you that have followed my writing these past few months know that I am deeply concerned about and laser focused on state legislative races. That is due to a few important reasons:

SO WHY TALK ABOUT A CLERK OF COURTS RACE?

Fair question. Because, thanks to wonderful gerrymandering, Prince William County has portions of 8 Virginia House of Delegates districts. As near as I can tell, most of the candidates for the House of Delegates are using this Special Election to prime the pump on their field operations and are rallying around Democratic Candidate for Clerk of Courts Jacqueline Smith. Before I go on, let me post her campaign information for those that want to chip and help out for a race happening right now:

PRINCE WILLIAM COUNTY IS A KEY TO THE STATE

I am not a Virginian, I know a bit about the lay of the land, but I don’t know it like the Virginians that write at Blue Virginia do, so here is just some of what they have to say about the importance of Prince William County. From their post written by on of the House of Delegates candidates Ken Boddye, Stand Up, Fight Back: Prince William (Virginia) Clerk of the Circuit Court Special Election

– Prince William County has long-since been a bellwether. A win here can set the tone for the rest of the 2017 campaign season not only in PWC, but in the entire state. In fact, the race is already getting statewide attention.

HOW DO HOUSE OF DELEGATES RACES RELATE TO A CLERK OF COURTS RACE?

Interesting question. I know some of you have been waiting for the data, well here it comes. Beyond regarding state legislative seats as particularly important, the more candidates in the field the better performance you see in any election. It is just a fact and looking at the 2015 data makes this clear as day. We need to wend through a few more charts than usual for the point to be made, but I think it is a rather informative journey. First off the basics.

Democrats fielded a candidate in each House of Delegates race except District 51 last cycle. Not running in that race likely impacted the outcome of the Clerk of Courts race in 2015. Before we speculate about that, let’s take a look at the facts on the ground. 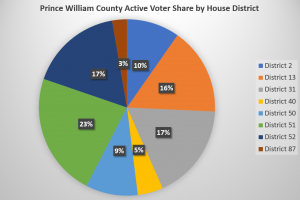 In terms of precinct count per district here are those numbers.

The next graphic is a bar chart shows the partisan vote share for the House of Delegates races in 2015. You will notice that District 51 has a huge Did Not Vote population. That is untapped votes left on the table for certain. I have followed this chart immediately with the results for the Clerk of Courts race so you can easily make a visual comparison. Don’t sweat it too much though, there will be some charts coming that even more clearly demonstrate the impact of not fielding a candidate in every HoD race. 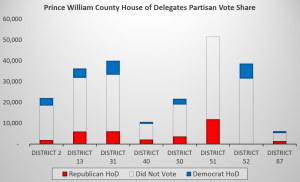 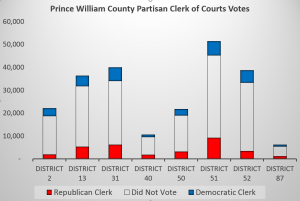 So, when I first started doing this, I thought comparing these charts side by side would be more revealing. They are interesting, but not as telling as I thought. With that in mind, I started digging into vote margins. That is where it got interesting, and quickly.

The thing that jumps out at me right away is that the District 51 margin for the HoD seat is more than 8,000 votes greater than the margin for the Clerk race. That is telling evidence that not running in that race probably cost us. But there are ways to look at this that are even more compelling.

I know, I know, the Republicans did not run a candidate in District 52, so why no commentary on that? Well, I do not care what they do, IF they run someone there this time I will dig into it more, but otherwise hopefully they don’t challenge in even more races this cycle! 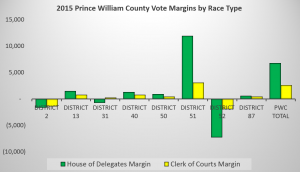 The next bar chart has the same two data points in the chart above. In addition I added the difference between the Total Democratic Votes cast in each race. So for example the District 51 bar tallies up to 6,118 votes because there were 6,118 votes cast for the Democrat for Clerk of Courts and zero for HoD race.

Aside from the Democratic difference between the two races being double the margin of victory for the Republican in the Clerk race, it is notable that all of the other contested seats see very nominal differences in margins versus difference in Democratic vote totals. That connotes a stable set of circumstances across the contested district precincts in Prince William County. 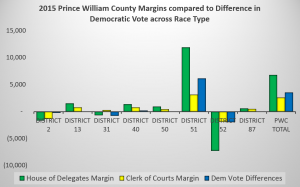 The final chart is based on some educated speculation about what we are seeing in the above data. Knowing that contested races actually return a fairly stable set of conditions I made some estimates on what would have likely happened had there been a Democratic candidate running in District 51 last cycle. Spoiler Alert: we would have an incumbent Democrat in this Clerk of Courts seat.

HOW DID I DETERMINE MY ESTIMATES?

There are a lot of sophisticated statistical modelling that can be done to extrapolate potential outcomes. I tend to rely on the simplest measures. While I cannot prove a negative, since there was no candidate we can’t know what the outcome might have been. That said, this type of speculation can prove instructive for future strategic planning.

I calculate that if a Democrat had run last cycle they would have brought in 10,749 votes. I arrived at that figure by averaging the results of Republican and Democratic votes in each contested House District (3,517 and 3,170 respectively) and then divided the Democratic vote average per district by the Republican vote. That gave me a figure of 90%.

Then I simply multiplied the Republican vote total for House District 51 by 90% to arrive at that 10,749 figure.

From there I made the same calculation between Democratic House votes in contested races and Democratic Clerk votes. That yielded dividing an average of 3,061 votes cast per House District for the Clerk seat in contested districts by the 3,170 Democratic average House of Delegates votes. That boosted the vote total from 6,118 to 10,380 votes. More than enough to win the election.

Without further ado, here is the final bar chart. 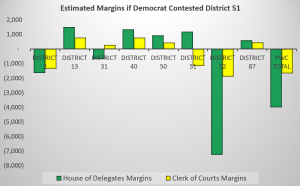 As you can see, with those estimates District 51 falls right within the norms of the surrounding contested districts now. Given that, the current Clerk of Courts would be the Democrat in that race, even though it would have been likely the Democrat lost the house race.

A Clerk of Courts race can seem like small potatoes. That said, this Prince William County seat sits at a pivotal electoral location in the state. If they can get this county organized as well as can be Democrats should be able to leverage dominance in Prince William County into stability in controlling statewide races in the future, including the presidential contests. Prince William County really is one of the keys to Virginia, with 8 house districts in play this fall, all with Democratic candidates contesting these races already, this Clerk of Courts race can be the electoral shot heard round the country in beginning to turn the red tide across state legislatures back.

In the end, the lesson is each of these races matter, and the more candidates we field, even if they lose, their entry into the fray may yield positive electoral results elsewhere. We must try and run a full slate of candidates, we must contest every race.

Let’s fight for this Clerk of Courts seat and and then turn the Virginia House of Delegates blue this fall.

DISTRICT PROFILES FOR REPUBLICAN HELD DISTRICTS – EACH DISTRICT NAME LINKED TO A DATA SNAPSHOT OF THAT DISTRICT:

There are links in each of those posts to candidate websites and Facebook pages.