FYI, Harry Wiggins is the Prince William County Democratic Committee Chair Del. Jackson Miller (R) currently represents HD 50 (Manassas City, parts of PW County) but is now running in a special election for PW County Clerk of the Circuit Court; Lee Carter is the Democratic candidate for HD-50. Personally, I view Miller as hard right, extreme, and basically a Trump Republican, but I’m not sure it helps to call him a white supremacist. No doubt, though, Miller has been very harsh against undocument immigrants and also virulently anti-LGBT, among MANY other faults, and absolutely should NOT be elected Clerk of the Circuit Court. Instead, I urge PW County voters to elect Democrat Jackie Smith on April 18. 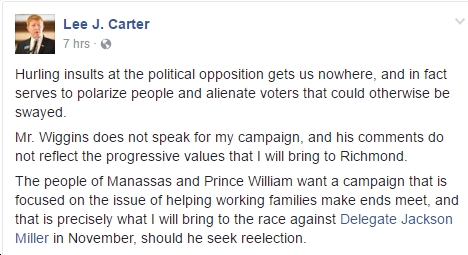 P.S. For his part, Jackson Miller is not pleased (shocker that the bully can dish out but not take it), whining, “My hope was that the media would not report on his shameless political stunt” and that “Creating fake news and attacking his character is the Democrats’ best chance of winning.” (rolls eyes)

P.P.S. Now hearing that at least one more Democratic candidate will probably be entering the HD-50 race.