It the level of absentee ballot requests is predictive of turnout here in Virginia this coming Tuesday, then we are potentially talking numbers – on the Democratic side, anyway – approaching the 2016 Virginia Democratic presidential primary. Turnout then was 785,041 votes, and it would be great to see something like that on June 13. But we’ll see; my guess is that turnout will be somewhat lower than that, with Larry Sabato’s “Crystal Ball” arguing, “A reasonable turnout guess might be 400,000, but given the absentee requests, perhaps 500,000 could be in the realm of possibility.”

For comparison purposes: Turnout in 2009, the last Virginia Democratic gubernatorial primary (between Brian Moran, Creigh Deeds and Terry McAuliffe), was 319,168. Turnout in 2013, when we had LG (Ralph Northam vs. Aneesh Chopra) and AG (Mark Herring vs. Justin Fairfax) primaries, was a relatively tiny 152,076. Turnout for the 2006 Jim Webb vs. Harris Miller US Senate Democratic primary was also small, at 155,784. Turnout in the 2005 Virginia Democratic LG primary (Chap Petersen, Leslie Byrne, Viola Baskerville, Phil Puckett) was 175,170. And again, turnout in the 2016 VA Dem presidential primary was 785,041. Can we match that last one or even come close to it? We’ll see very soon. As for Republicans, let’s see how looooow they can go (not just in terms of ethics, morality, etc, but also in terms of voter turnout on Tuesday – lol). 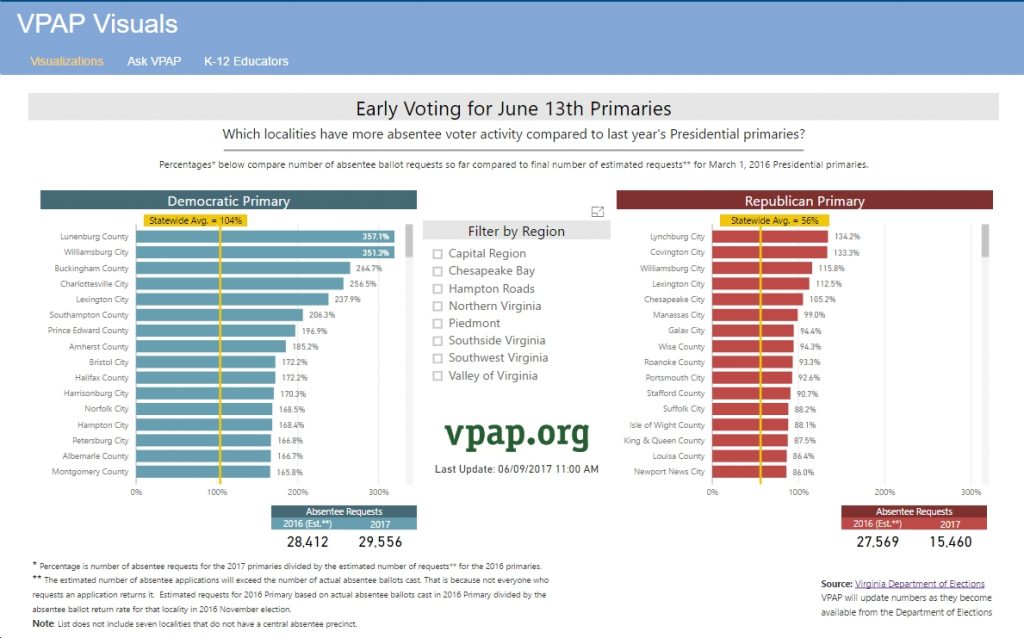