lowkell - June 17, 2019 0
See below for two interesting graphics, courtesy of VPAP, on last Tuesday's elections turnout. As the Fairfax Dems put it, "it looks like local... 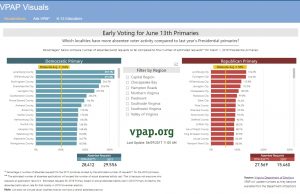 lowkell - June 9, 2017 6
It the level of absentee ballot requests is predictive of turnout here in Virginia this coming Tuesday, then we are potentially talking numbers -...

After “After Virginia Votes”: A Response to a “Radical Centrist”‘s Election...

Today I attended VPAP's "After Virginia Votes" panel discussion on the 2014 election featuring senior strategists for both the Warner and Gillespie campaigns. Aside from helping to lower the average age in the mostly octogenarian filled room at George Mason University's Fairfax campus, I attended to hear how Warner advisor David Hallock would try to spin the near defeat for his boss.

Sadly, the sometimes candid conversation between David Hallock and Paul Logan paled in comparison to the sparks between Chris LaCivita and Ellen Qualls during VPAP's 2013 analysis. Now that was an analysis worth attending! LaCivita is an unapologetic political hack, in the most delightful way possible, who never shies away from defending his dirty approach to politics. No wonder many of my friends simply call him "the devil." Compare that to Logan and Hallock shifting uncomfortably in their seats trying to defend the practice of spamming inboxes in order to raise low donor funds.

Hallock at several times made the point that the lack of engagement during the midyear election depressed both volunteer enthusiasm and eventual voter participation, particularly among the Democratic base. While bemoaning the difficulties of getting Democratic constituencies to the poles, he clung to defending Warner's "statewide" campaign that stressed bipartisanship and reaching out to Southwest and Southside Virginia.

Perhaps Democratic disengagement is not a fact of life for midterm elections, but a byproduct of the type of campaign Warner ran?

In his concluding remarks, Hallock made the case that the Democratic Party needs to do a better job of engaging our voters and turning them out in off-year elections.

Let's talk about that.

(This is the second part of a twelve part series looking at the challenges, obstacles, and future possibilities of Virginia Democrats. Check out day one. Please join in by commenting below your thoughts on some of the topics raised in the diary, and please vote in the poll at the end on which rematch you'd like to see in 2015!)

On the second day of Christmas, the Commonwealth of Virginia gave to me ...

A system of odd-year elections, shared mainly by Southern outliers and hotbeds of two-party democracy (hah!) like Mississippi and Louisiana that depresses voter turnout from high profile elections in even-years.

In 1948, the great American political scientist V.O. Key wrote that Virginia was a "political museum piece . . . more akin to England about the time of the Reform Bill of 1832 than to any other American state."

Have we changed much since then?