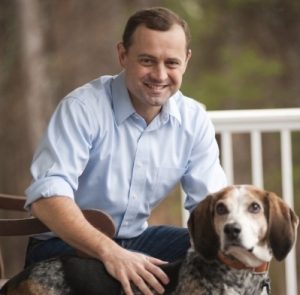 Tom Perriello is on fire – in a calm, reasonable, rational sort of way. Check out his flawless performance on Meet the Press, where he used every question to push his reform agenda powerfully and eloquently – and by the way, nail Establishment Ed Gillespie, while declining every invitation to bash his Democratic opponent.

I had the opportunity last week to see Tom at a backyard fundraiser, where he spoke fluently and compellingly on issues of great importance to everyday Virginians for 20+ minutes without notes – and for longer in personal discussions as he worked his way through the crowd.

Pay attention to what Tom has to say and you’ll hear a level of understanding and nuance that few politicians can match, delving into issues that many don’t bother to touch. Following, from my notes, are a few examples:

– The threat that automation poses to jobs: While Trump tries to make immigrants the scapegoats for job loss, we can see the clear reality around us: Home Depot and CVS replacing cashiers with scanning machines, parking garages automating to get rid of attendants. As Tom points out, regardless of all the “war on coal” hogwash, coal miners know that it’s really the machines (as well as natural gas) that are taking away their jobs. He gave the scary statistic that automation could threaten 35-50% of our jobs – with the lower and middle classes most at risk.

Tom proposes several solutions to confront this genuine crisis. His P-to-C education plan would extend the current K-12 system, by starting with universal pre-kindergarten and then extending to free community college for all. As he notes, two-thirds of Virginians will never go to a 4-year college and some read a Democratic focus on assuming all will have that experience as “elitist.” And he likes to point out that his community college proposal resonates most strongly with rural whites and urban minorities – the two groups today’s Republicans are trying most strenuously to pit against one another.

In addition to an expansion of apprenticeship programs, Tom also proposes fostering more locally-centered economic development, so that communities can gain more control over their destinies rather than being at the mercy of cost-cutting multinational firms.

– Criminal justice: Tom outlined how bad Virginia’s current policies are. Those accused of crimes have to come up with money to make bail, leaving many poor defendants stuck in jail. Public defenders get very little compensation for their services – creating perverse incentives for them to push defendants to plead guilty and settle their cases. The threshold for felony theft is so low, at $200, that one can go to prison for stealing a cellphone. And three-strikes policies fill up our prisons with people that may be dealt with more productively in other ways. In addition to reforming such policies, Tom noted the much greater return on investment from sending people to community college vs. sending them to jail.

– Poverty: Tom spoke movingly of meeting people during his travels who are working 80 hours a week at two minimum wage jobs, with barely any time to see their kids. His plans to address this issue include instituting a living wage, the P-C education plan discussed above, expanded health care coverage, and mandating an end to the gender pay gap.

On these and other issues, he noted that he has found voters resonating with what he has to say in Republican as well as Democratic areas. And, as a professional peace negotiator over many years in Africa, he has learned that the critical first step is listening to people – as they often provide the solutions. Indeed, Tom Perriello is one of the best listeners among politicians that I’ve met.

In terms of strategy, Tom noted that while Trump did worse in Virginia than any Republican presidential candidate in his lifetime, Democrats also failed (though just barely) to get a majority of votes in last November’s election. He stressed the need to tap into the 6% of voters who opted for third party candidates, as well as those who just didn’t vote. In addition to motivating the Democratic base, we need to reach out to other constituencies in search of solutions and hope.

Finally, Tom noted that while we have to fight Trump and his Republican enablers every day, resistance by itself is not enough. Democrats must articulate a practical, compelling, positive vision that will inspire people to get and stay engaged with politics and their government.

And this is precisely what Tom Perriello is providing right now. He left me after this recent bravura performance more inspired than any candidate has since…Barack Obama. Please think about that as you vote in the Democratic primary Tuesday, June 13th.

As Incoming Winter Storm Expected to Bring Snow to Much of Virginia, Gov. Northam Declares State of Emergency