For some reason unbeknownst to me, there are actually people out there who are laboring under the false impression that Ed Gillespie is not hard right-wing. No, Gillespie doesn’t come across in as inflammatory a fashion as Corey Stewart, but on issue after issue, Gillespie is hard right. For instance, see Video: Anti-LGBT Hatefest, Anti-Abortion Extremist Fest by Ed Gillespie et al at GOP Debate, at which Gillespie said “I believe that life begins at conception” and “I would like to see abortion be banned.”

For lots more examples, see below the photo of Gillespie with the VA GOP’s extreme Attorney General nominee, John Adams (left; for more on this guy, see Video: Extreme VA GOP Nominee for Attorney General Wishes We Had “4 More Clarence Thomases” on SCOTUS), and State Senator Dick Black (FAR right; for more on him, see VA Dems Call on Ed Gillespie to Renounce Support From War Criminal-Defending Dick Black). So, obviously politicians take photos with random people all the time, but John Adams and Dick Black aren’t just random people — Adams is Gillespie’s ticketmate, and Dick Black is…well, “Plastic Fetus Dude” who also is BFF with the war criminal President of Syria. Any further questions? If so, then see below the photo for more examples of Gillespie’s extremism. 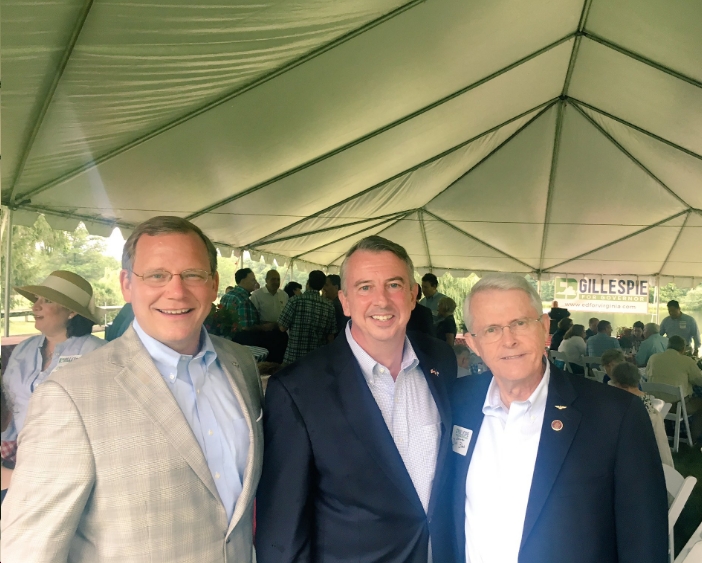 Also, check out Ed Gillespie claiming (falsely, of course) that North Carolina’s odious HB-2 was about fighting back against “compelling teenage girls to share locker room showers with teenage boys…compelling teenager girls to have to way in a hotel room with a teenage boy on an overnight band trip.” Gillespie continued, “We cannot put at risk and in jeopardy our young children and teenage girls…” Disgusting. In fact, transgender kids are FAR FAR FAR more “at risk” and “in jeopardy” from anti-gay bullies than they will ever pose to anyone. This is fearmongering, demagoguery, and utterly disgraceful by Ed Gillespie, who SHOULD be ashamed of himself but of course won’t be.

On energy/environment, Gillespie is as godawful as you’d think he’d be: “I will work with the Trump Administration and our Republican majorities in Congress to expand the production of safe, reliable and affordable energy in the Commonwealth, including the development of oil and natural gas reserves off our deep sea coast and stopping the regulatory assault on our coal sector.”

…I will pursue policies consistent with our founders’ vision of government designed to check excessive federal overreach and protect individual liberty. Unfortunately today, the government is growing too big, our culture is coarsening and the timeless, conservative principles on which our nation was founded are under attack. The challenge for Virginia’s next governor will be to reject federal overreach, secure and strengthen the Second Amendment, and protect innocent human life.

I will stand up for Virginia’s role in our federal system of government, and be a check on Washington when it overreaches or tries to exercise power that is rightly reserved for the states. I will protect an individual’s Constitutional right to keep and bear arms, standing with our Republican-led General Assembly to defend our Second Amendment rights. I am pro-life and would work to foster a culture that respects human life. I support education and healthcare to help women avoid unplanned pregnancies, will advocate for adoption and foster care, and believe we must ensure every woman has the opportunity to choose life. By taking this approach, we can not only defend but advance our shared principles.