For the past several years, as most of rural Virginia has become increasingly “red,” a number of us have been arguing that this shift is as much about a lack of real alternatives as it is about a genuine change in values.   As someone who has lived in southwest Virginia for the past 32 years, who has worked with farmers, loggers, miners and small business people, I’ve found as many places of agreement as disagreement, particularly on basic economic issues.  During my run for U.S. Congress in 2012, I fared better in the coal counties of the 9th District than overall, with a message that attacked inequality and trickle-down economics, and proposed leveling the playing field with “bottom up” economic policies.  A message I might add, that didn’t shy away from the need to care for our land and to transition beyond coal.

So for folks like me, it’s been particularly painful to see our region become such a tough place for Democrats seeking office, and to overwhelmingly support Donald Trump for president.

There are many reasons for this steady movement to the right, from the outsized impact of Fox News to the role that churches have played in shaping perceptions of their congregants.  But one reason that simply does not get enough attention is this: the Democratic Party and the progressive movement both have, for the most part, written off rural America.  It’s true.  I’ve experienced this first hand, not just as a Congressional candidate, but in my speaking, writing and advocacy work intended to elevate both the problems and the solutions emerging in small towns and rural communities.  Whether focused on politics or the economy, progressive and liberal organizations are largely clueless when it comes to rural communities.  And it’s not a priority for them to change that.

A month after Trump’s election, a dozen or so folks from southwest Virginia began meeting to consider what we could do, and especially, what we needed to do differently. This group, which calls itself Progressive 9th, includes farmers, academics, working people, students and activists. Some are long-time Dems, while others lean more towards being Independent.

With the goal of changing – and greatly improving – our politics and public debate, our group has just completed and released the Rural Progressive Platform.   You read that right: it’s a Progressive Platform, written by rural residents, grounded in rural values, priorities and language.  The full platform is four pages long and is accompanied by a one page synopsis, both of which can be found here (also, see below).  They are not intended to address every issue of importance to rural people or to political progressives, but rather to fundamentally reframe the debate and to offer more authentic and constructive ways to discuss economic, environmental and community issues.

We invite all readers of Blue Virginia, rural and urban alike, to read and consider the Rural Progressive Platform, to share it widely, and to use it or adapt it as you need.  We particularly hope that local and statewide elected officials, candidates for office and Democratic Party leaders at all levels will review the platform.  We believe that it could help us begin to overcome our severe polarization and political dysfunction, not by aiming for some lukewarm middle ground, but by identifying and prioritizing the core values shared by both Progressives and rural people.

Anthony Flaccavento is a farmer and sustainable economic development consultant from Abingdon, Virginia, who was the Democratic candidate for Congress in 2012.  He started Progressive 9th, along with Michael Hudson of Blacksburg, and a dozen other people from eight different counties in southwest Virginia.  For more information, please visit the Rural Progressive Politics website at https://ruralprogressivepolitics.wordpress.com/

A Rural Progressive Platform must be built upon three central elements:  land, livelihood and community.  Over generations, these three pillars of rural life have shaped the economies and cultures of much of the countryside; they have forged our commitment to self-reliance and belief in hard work.   Though much of rural America has changed greatly over the past several decades, land, livelihood and community continue to shape the way we see the world, ourselves, and therefore our politics.

What follows here is a framework for Progressive Values within a rural context, particularly that of Central Appalachia.   It frequently uses “us” and “we”, not to stereotype or diminish others – “them” – but because we write from our own experience, in our own words.  This platform is not intended to be comprehensive, but should be understood as a background document from which rural progressives can develop more focused and fully developed positions, or platforms better suited to their particular regions.  It is accompanied by a one page summary, which we hope will help spread the ideas more widely.

In southwest Virginia, our forests provide lumber for building, wood for heating, deer and turkey for food and ginseng for a little bit of cash.  Cattle and sheep graze on lush pastures, while narrow strips of bottom land have grown tobacco, produce and home gardens.  Creeks and rivers offer bass, trout and perch, as well as irrigation for crops.  And underneath all of this, in some parts of our area has been coal, which historically provided well-paying jobs and a good chunk of the tax base for many local services.

In Kansas, they have prairies; in Louisiana, bayous.  Though each place is different, rural regions share a sense that nature is part of how we meet our needs, feed ourselves, create jobs and livelihoods.  That the mountains, forests, valleys and streams are a practical part of our lives and economies.  No doubt this is at least part of why we look at a chainsaw or a rifle so differently from most city folks.  Yet it’s also true that many urban communities have begun to revitalize and rebuild their own land base, whether as community gardens, farms or public parks.  The time is right for rural and urban folks to come together around the idea of working landscapes that respect the environment while helping people meet their needs.

There are “environmentalists” in rural communities and small towns across Appalachia, the Midwest and every other part of the country.  Nevertheless, because the environmental movement has emerged most strongly in cities or suburbs, its focus has been on protecting the environment, more so than using it well to meet people’s needs.   It often seems that environmentalists forget just how much everyone depends upon the food, materials and energy that primarily come from rural areas, thanks to the work that rural folks do.  Raising food, cutting logs, mining coal or minerals, drilling for gas – these are some of the jobs we do, along with the mechanics, the welders and carpenters, the engineers and the truck drivers that finish the work and get these products to market.  If we seem to resent people telling us how to manage our land, it’s because we do a lot of the work that enables so many others to eat well, be warm and live comfortably.

Of course our jobs are far more diverse now, and many rural people no longer even raise a garden, let alone work in the outdoors.  But the sense of ‘livelihood’, of taking care of our own needs through hard, sometimes dangerous work, of being self-reliant, that sense is still strong in most rural people, still part of what we believe and what we want.  We’re encouraged to see that an increasing number of people in cities, especially young people, are yearning to work with their hands, to learn how to raise food or live closer to the land.

In rural places, family and neighborliness are the starting point for community.  And church.  Small towns and rural places, like many bigger cities, have seen community eroded by empty store fronts, consolidated schools, addiction and more.  Even so, we still tend to set down roots in our place, so when we’re told to just ‘move to where the jobs are’, we think it’s a choice we shouldn’t have to make.

We believe that a caring local community offers the best means to support and help our neighbors.

It’s true that too often we’ve not welcomed people who look or act differently from our norms.  But not always.  After 911 and Katrina, many first responders traveled from rural towns to New York and New Orleans.  For years, the UMWA offered help to Chinese miners in their struggles to make their coal mines safer.  We can be neighborly to others, far away.  But we need to believe that our own communities are valued and respected, not dismissed or ridiculed.

If land, livelihood and community are central to rural identity and culture, what would a progressive platform look like in these places?  How should it be different from the progressive ideas and language that we usually hear?  What are some examples of public policies to support these values?

Rural Progressive values and the land:

We love the land and all it has to offer.  However, we want people who don’t live from the land, who experience nature mostly through tourism or recreation, to understand this:  It’s hard to make a living from the land without harm, without impact.  Farmers understand this, as do fishermen, hunters, loggers and miners.  Those of us who farm, fish or hunt see ourselves as good stewards, because we know that our livelihoods depend on healthy land.

If we’re going to do a better job sustaining the environment while still meeting people’s needs, progressive policies must make partners of those who live from the land, rather than just regulating and restricting what happens in the countryside.  Progressive policies should make major investments in the most promising rural sustainable businesses, particularly in communities historically dependent on coal.  Rebuilding local economies so that people can care for themselves and their families should be as much of a priority as protecting the environment.  We need to see that we are truly in this environment thing together, sharing the challenges equally.

We say without hesitation that working men and women must be at the center of a Rural Progressive platform and must form the foundation of the broader progressive movement.  Working folks in rural Appalachia and urban Baltimore might look different, but in city and country alike working people often do work that is physically demanding, work that requires a practical intelligence, and jobs that so many others have come to take for granted.  We think it’s long past due that rural and urban workers share in the wealth our work creates, and be respected by politicians with their actions, not just their words.

We come from generations of resourceful people, folks “who were poor but didn’t know it” because they made the most out of what they had.  A Rural Progressive platform should thus be built on responsibilities at least as much as rights, with policies that help people help themselves, and build on our strengths and assets.

We’ve not yet given up on community – real community, built around a place.  We need progressive economic, tax and trade policy that supports healthy, self-reliant local communities, instead of polices that suck the life out of our businesses, homes and downtowns.

Strengthening local communities should be a central goal of progressive policies.

Rural citizens believe in fairness and understand that some people start with advantages that ordinary people just don’t have.  After all, Jesus honored the widow, who gave in spite of her poverty, and rebuked the Pharisees, who gave only from their surplus.   It seems fair, then, to ask more of those with wealth and privilege, to oppose policies that further their economic or political power, and to protect and care for those who are struggling. 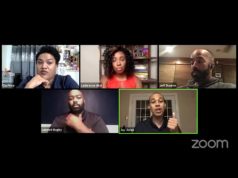 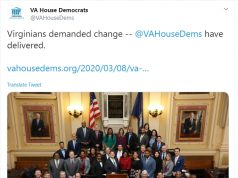 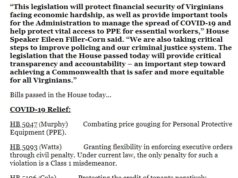 #wednesdaymorning News: Thanks to Trump, “An Epic Moment of National Shame”; Trump Tells White Supremacists to “Stand Back and Stand By”; Trump Described as “Unhinged,” “UnAmerican”; Trump’s “testosterone-fueled, unmanaged rage and insecurity”” https://bluevirginia.us/2020/09/wednesday-news-thanks-to-trump-an-epic-moment-of-national-shame-trump-tells-white-supremacists-to-stand-back-and-stand-by-trump-described-as-unhinged-unamerican-trumps-te