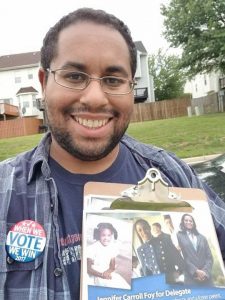 (Cindy Cunningham was out-of-state this past weekend to I took up the mantle on her behalf!)

As the man opened the door and eyed me sternly, a sense of nervousness came over me that I haven’t felt in quite some time. I’ve canvassed for years – for Democratic candidates and causes on all levels – and had walked in all corners of Prince William County carrying the literature and banner for our party. I even ran for the House of Delegates this year; something that has changed my definition of nervousness forever.

And yet, here I was, feeling nervous all over again as this voter opened the door.

It was the first time I had seriously canvassed for Jennifer Carroll Foy, who’s running for House District 2 (which is made up of parts of Prince William and Stafford Counties.) This gentleman was the first to answer the door out of the dozen or so I had already knocked on. I’ve known Jennifer for nearly half a year now, and I was familiar with most of her policy positions, but in that moment, my mind went blank and instincts kicked in.

“Can I help you?” he asked, looking me in the eyes and then down at my clipboard.

I introduced myself as a volunteer from Jennifer’s campaign, and listed off some of the talking points from her walk cards, nearly verbatim. He skimmed the words for a moment as I mentioned her being one of the first women to graduate from the Virginia Military Institute, and it was at that point that I notice his eyes move upward a bit.

“Does she have a husband?” he asked. The question caught me off-guard, but was the perfect opportunity for my mind to readjust. I answered that she was indeed married, and then I asked him why he had asked about it. He went on to say he saw the picture of the baby on the walk card and thought it was her child, but didn’t see a picture of her husband. I noted that it was a picture of Jennifer herself, and he nodded.

During the exchange, I went back to where I should be as a canvasser – asking him to share his views and experiences rather than me simply listing thing off.

He then went on to tell me that he votes in most elections, and doesn’t identify with one party or another. When I asked him about his thoughts on the candidates running this year, he indicated that he was doing research on them all, and that my visit was helpful. He went on to explain that although he tends to lean conservative with some of his main concerns – economy and jobs – he looks at a candidate holistically and how they say they’re going to address everything. He then admitted to being an “all issues voter” who has split tickets in the past.

We spoke through a few different issues, and afterward he talked about his frustration with surrogates for candidates that weren’t able to say anything beyond what was already on the literature. It made me remember how my nervousness almost resulted in a very similar outcome.

We wrapped up our conversation with me indicating my respect for voters who look at issues rather than letters next to the names on ballots, and he thanked me for my time. He then extended his hand with a small smile on his face.

“But hey, she must be doing something right to have you walking for her on a Sunday afternoon,” he said. “Thanks for your time. Be careful out there.”

Several other voters indicated that they didn’t know about the election, or that they knew about it and hadn’t given it much thought. Others told me that they were too busy to think about politics at the moment, but they appreciated the reminder about who’s on the ballot this year. For many of them, it was the first time anyone had come to their door since 2016, and they had completely tuned out of politics.

Some of them told me that they cared about jobs and getting to work in a timely manner, while others cited education and healthcare as their top priorities. All of them, though, spoke about kitchen table issues that affect voters of all persuasions each and every day.

There was just one person who told me that she didn’t vote. When I tried to press her on it and asked if there was anyone else in the house who did (she wasn’t the one on my walk list,) she took on a forlorn look and simply thanked me for stopping by and closed the door.

Far too often, those of us who live and breathe politics are left frustrated that others don’t seem to see how much elections affect their lives. That frustration no longer leaves me bewildered anymore, though; I know that I won’t be able to convince everyone to vote for our candidates, or even to pay attention to the election in the first place, but l know that small experiences matter, and canvassing is a two-way street when done properly.

We can only hope to properly connect with our communities when we take the time to listen to people, and make politics a more approachable, habitual part of their lives. That’s why I’ve been a believer in deep canvassing even before there was a term for it, and what we should be doing as a party all the time, regardless of campaign season.

Getting more folks energized and motivated to vote starts with us going to where they are, after all.