Not surprisingly, in the aftermath of controversial votes, there are those who continue to fight for what they believe in. That appears to be the case in Fairfax County, where a self-described “NON-PARTISAN group of concerned parents and residents who live in Mason District in Fairfax County and are disturbed about the lack of good governance, irresponsible spending, safety and education of our children in the Fairfax County Public Schools, and the costs to the Fairfax County taxpayers” are petitioning to recall Fairfax County School Board member Sandy Evans.

My thoughts on this mostly echo Evans’ Fairfax County School Board colleague Pat Hynes, who wrote the following this morning on her Facebook page (note: she gave me permission to share it here; bolding added by me for emphasis):

A group of people who don’t like the outcome of the school board’s vote on JEB Stuart HS are petitioning in court to remove my colleague Sandy Evans from the board. I have developed a good deal of sympathy and patience for the methods that frustrated constituents use to vent their displeasure – I also have felt powerless and lashed out in anger at elected officials. But to go to the extreme of asking a court to overturn the will of the people, who have elected Sandy three times now, is remarkable…This is about punishment. And I can’t think of anyone less deserving of this attack than Sandy Evans. Sandy bends over backward to provide opportunities for community input, and she has the patience of Job with fellow board members. She is easily the hardest-working among us and is unfailingly compassionate and truthful. Thanks to George Waters for this letter.

In the comment section of her Facebook post, Hynes added that “after two and a half years of hearing from the community and considering the options – and the fundamental reason for the name change – it became clear that neutral was not the change the community needed or wanted.” She also noted, 100% correctly:

We are still in a battle for civil rights. I’m encouraged that the Start community picked a side. Those voting to honor a civil rights leader outvoted name-keepers three to one. That they didn’t coalesce around one name shouldn’t obscure the predominant sentiment.

Since the Confederacy fought to defend slavery, as written in numerous individual states’ declarations of secession, J.E.B. Stuart put his life on the line for the continued enslavement, torture, and genocide of black Americans. That action may not emotionally impact the white students, but students of color feel it…Sadly, it is not surprising for there to be backlash against renaming J.E.B. Stuart High School after a person of color. It is because we have not done enough to combat racism and specifically anti-blackness since we erected this Confederate monument in 1958.

The bottom line is that attempting to “recall” Sandy Evans over a 7-4 vote (last I checked, that’s a strong majority) by the Fairfax County School Board to change a county High School’s name from a Confederate general to “Justice”: a) won’t succeed; and b) shouldn’t succeed. To the contrary, we should all be thanking folks like Sandy Evans who do the difficult, time-intensive, often-thankless job of serving on a School Board. For my part, I want to publicly thank Sandy Evans, Pat Hynes, Dalia Palchik, Jane Strauss, Karen Keys-Gamarra, Ilryong Moon and Ryan McElveen for doing the right thing on October 26, and more broadly for the great work they do. As for one of the School Board members who voted AGAINST changing the name, we’re talking about this person, so…’nuff said there.

P.S. Arlington School Board Chair Barbara Kanninen responds, “A few people have “casually” mentioned this recall to me… something they’d like me to keep in mind as we discuss our school names in Arlington. Lovely. Best to Sandy. Frivolous lawsuits still cost time and money for those being sued.” 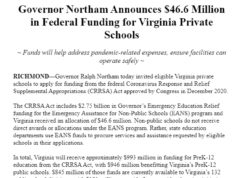