The following is from Trent Armitage of the Virginia House Democratic Caucus. My only quibble with this, and it’s actually a pretty big one: here at Blue Virginia, we actually DID think about picking up massive numbers of House of Delegates seats. See If Ben Tribbett’s Historic Virginia “Swing” Scenario Is Correct, We COULD See Major House of Delegates Pickups for Dems This November. from back in March. So, actually, both Ben Tribbett and yours truly WERE thinking about this; personally, I backed off a bit because based on the polls it didn’t look like Northam would win big, because his campaign relentlessly lowered expectations (I was told by a senior Northam campaign person – last name starts with the letter “T,” ahem – that there was NO WAY Northam would win by more than 3 points, and that anyone who thought so had no clue what they were talking about), etc. Well, guess who was right (people like Ben Tribbett and me) and who was wrong (the Northam campaign folks who insisted on their plus/minus 3 points scenario and minimal House of Delegates pickups scenario)?  Hmmmm.

P.S. Ben Tribbett tweets, “In Newport News- where HD94 takes up half of city- Dems picked up 64 votes in AG recount, GOP got 4. As I keep saying better than 50-50 that the House will be 50-50.” Now, here’s the email from Trent Armitage of the Virginia House Democratic Caucus…

As you know, there were six races with the potential for recounts. The good news is that both Del.-Elect Dawn Adams and Del.-Elect Cheryl Turpin are now safe from a potential Republican challenge. They put us at 49 seats in the House of Delegates — a pick up of 15 seats from where we were just a few days ago. Not one single pundit even thought about us picking up 15 seats, but our candidates proved the pundits wrong and with the help of tens of thousands of volunteers and supporters make the biggest gain Democrats have made in the House of Delegates since the 1800’s.

Sadly, Larry Barnett came up just short in Chesterfield County and has conceded his race. This was a district that pundits expected the incumbent to win handily, but Larry came within a few handfuls of votes of pulling this out. He’s a class act and I fully expect to see him continue his public service in the future.

That leaves three races, with Josh Cole, Donte Tanner and Shelly Simonds as our Democratic candidates, that are too close to call. 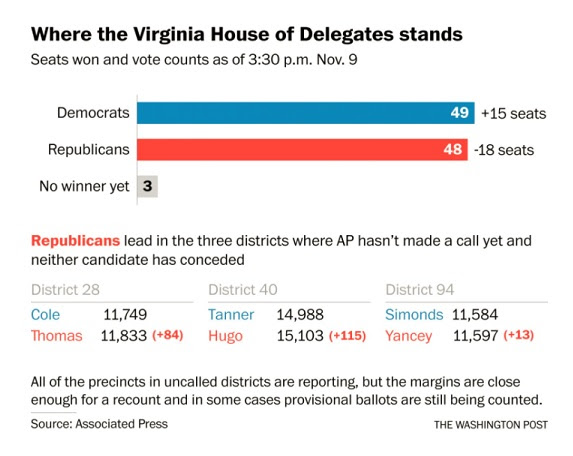 We will continue to investigate, track down provisional ballot voters, and make sure that every voice is heard and every vote is countedin these three districts. If just one district turns our direction, we’d have a tied House of Delegates — if two change our way, we’d have the first Democratic majority in nearly 20 years.

Thank you very much for your support — this has been a fantastic year, but we’re not finished until every voter has had their vote properly counted.