Is Putin repeating #TrumpRussia in Virginia?

Sadly, the answer appears to be YES! as Bots stir racial strife in Virginia.

Even as internet firms had lawyers testifying on the Hill and Facebook’s Zuckerberg was telling investors about all the great security measures being put in place, the reality for Virginia: Russian and East European bots are seeking to stoke up the Tea-Party(-ites) and rabid GOPers (to boost the vote for Ralph Gillespie and the other GOP disasters) while stoking discord among traditional Democratic groups to try to suppress Ralph Northam’s vote.

The Latino Victory Fund ad — a very aggressive ad depicting fears of immigrant and minority children in the face of (neo)Nazis marching in Virginia streets and a GOP election campaign that is barely a fig-leaf beyond outright racist with a nightmare scene of a black, Gillespie-bumper sticker wearing pick-up attempting to run over children — touched some nerves (and the media went right along with the GOP outrage game) and got pulled with the terrorist attack in New York City.

The “outrage” continued post-ad pulling, with targets both on the right and left. The telling item about the social media outrage:

…reaction has been amplified on Twitter by automated accounts. Out of the 15 accounts tweeting most frequently about the Latino Victory Fund ad, 13 belong to fully or partially automated bots,

This shouldn’t surprise us. Considering their success in 2016 getting #PutinsPuppet into the Oval, why would the Russians hold back in 2017?

…more than 400 suspicious accounts have followed Northam’s campaign Twitter account in recent days, with many of them tweeting mostly in Turkish or eastern European languages. 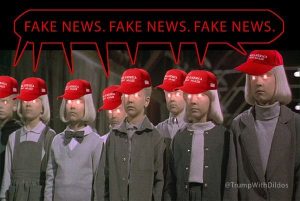 This reporting echoes and documents what I’ve been hearing from people — that they are seeing odd dumping into their Facebook and other accounts promoting material seeking to undermine support for Northam.

As Democrats need to focus on #GOTV, the bots are out in force seeking to create discord and distraction as tools to suppress the vote.

Virginians — and those across the rest of the country — can’t let this stand unanswered.

The clear warning to all of us. When being fed, whether on Twitter or Facebook or otherwise, we need to ask ourselves this question: Is someone you know a Russian agent?