There’s a fascinating post over at Vox examining segregation across the country, and specifically in school districts. According to Vox (bolding added by me for emphasis):

We see this in city after city, state after state.

And often the attendance zones are gerrymandered to put white students in classrooms that are even whiter than the communities they live in.

The result is that schools today are re-segregating. In fact, schools in the South are as segregated now as they were about 50 years ago, not long after the landmark Brown v. Board of Education Supreme Court decision.

But this exact strategy — gerrymandering school districts to include certain kinds of students and exclude others — can also be used to integrate a school, rather than segregate them.

Vox has a tool that allows you to look at your county or city’s segregation levels. I’ve posted a bunch of maps of select Virginia jurisdictions using that tool, based on how schools are zoned now. See below for those. 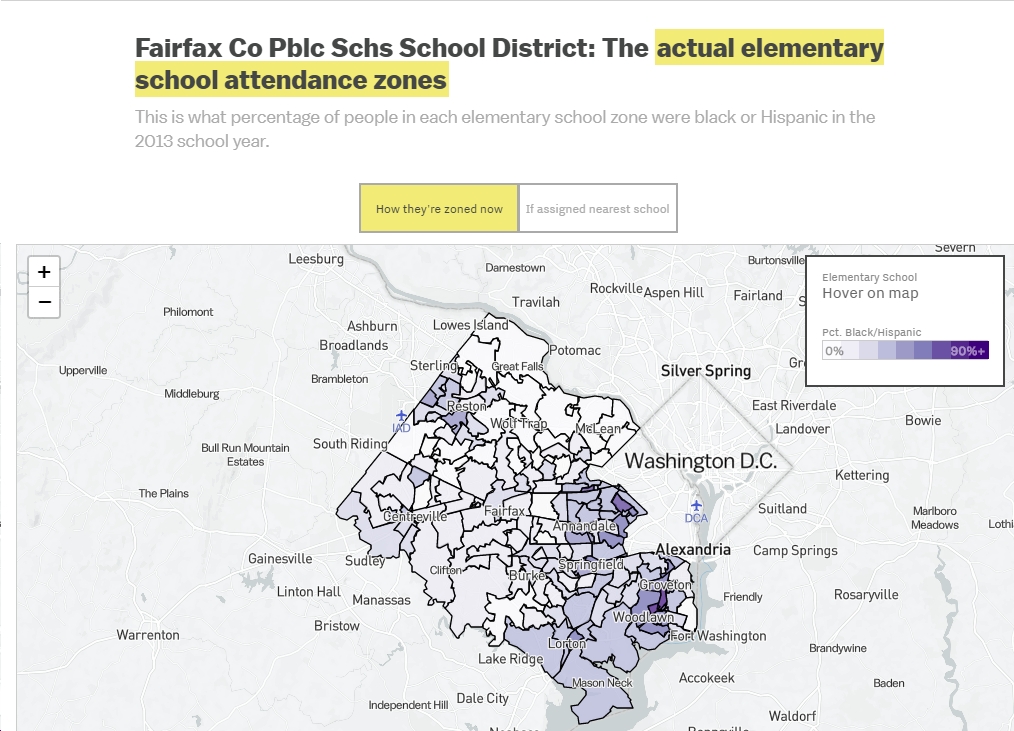 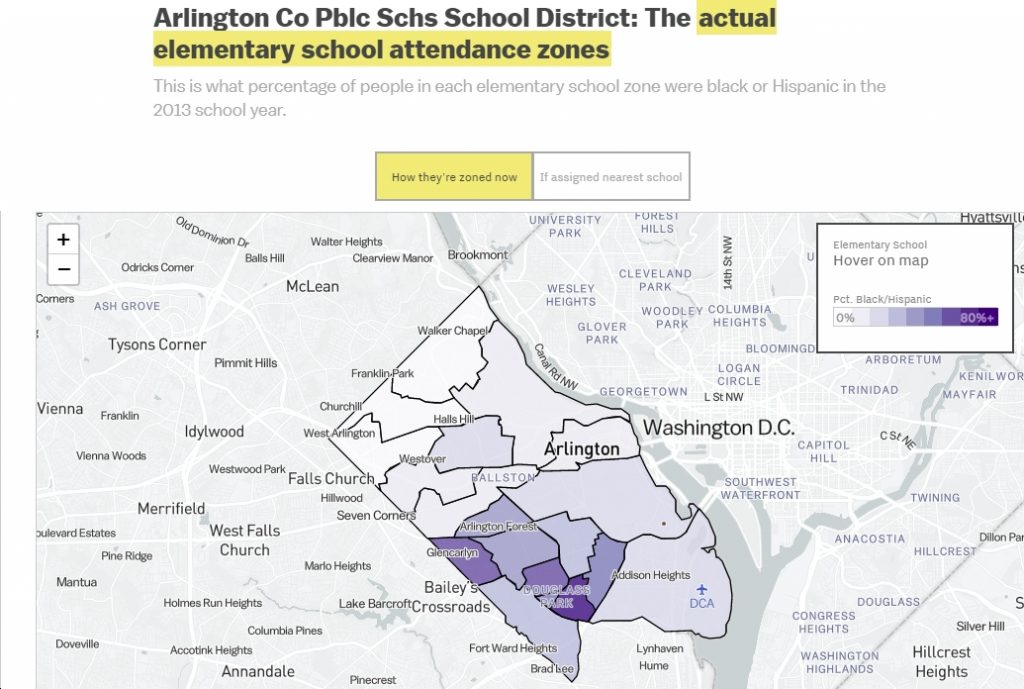 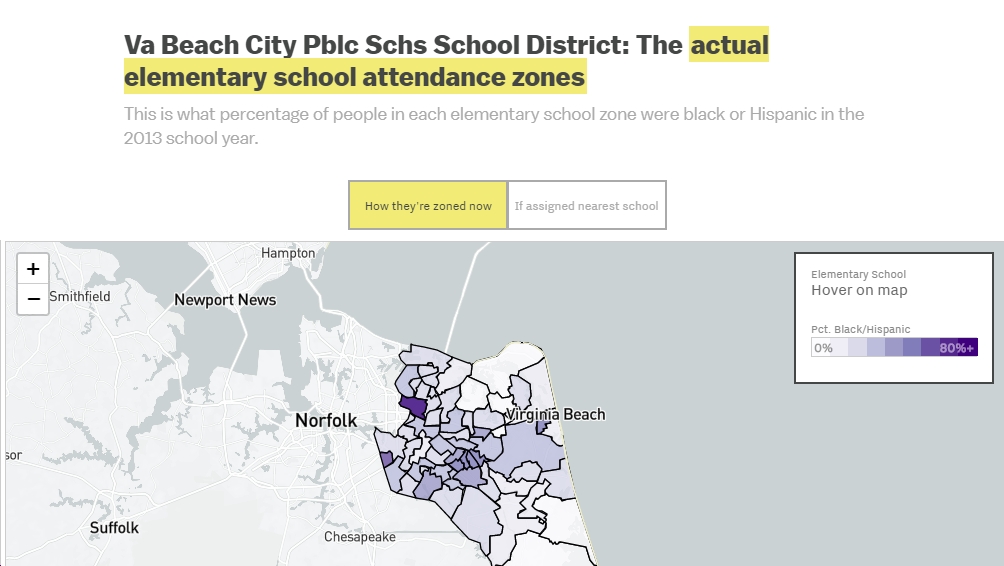 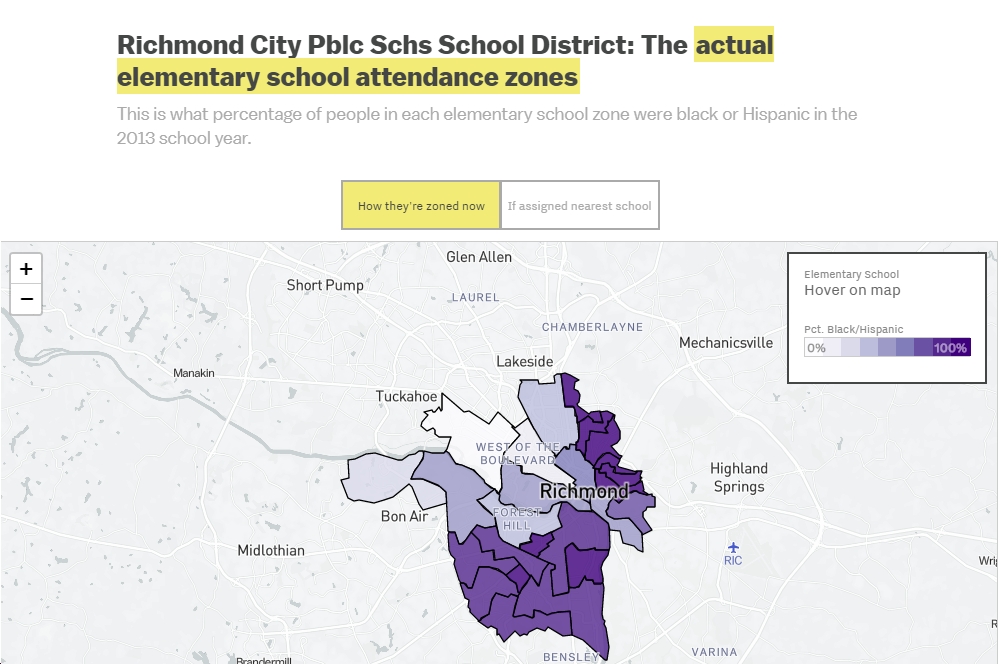 *Alexandria has zones that are fairly diverse, but also several – particularly in the west end – that are heavily Black/Hispanic. 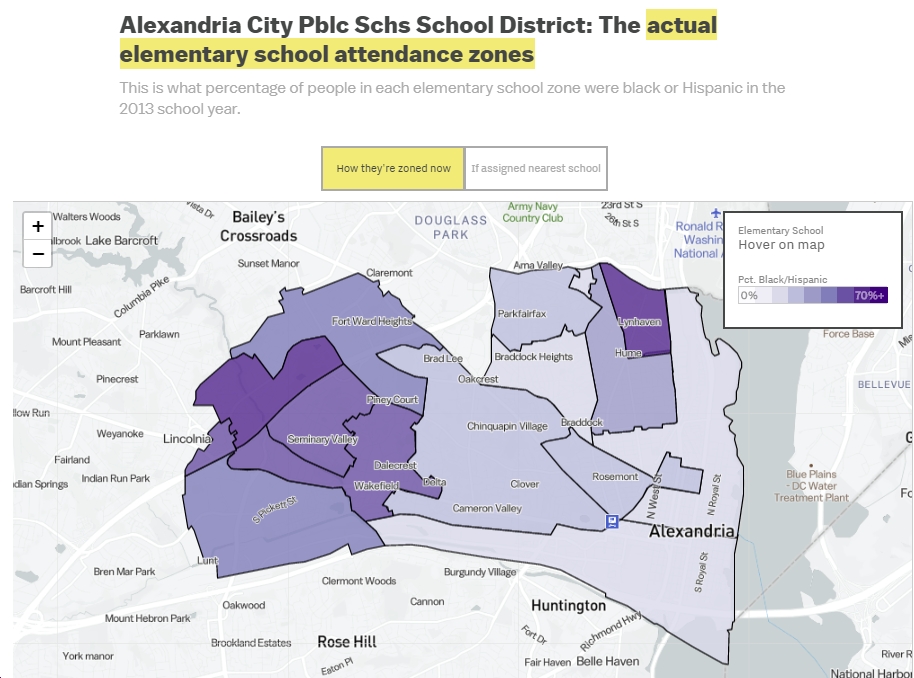 *PW County looks like different sub-counties from a racial point of  view, with areas that are almost all White (in western and northern parts of the county) and other areas (e.g., Woodbridge) that are heavily Black/Hispanic, plus some that are more integrated. 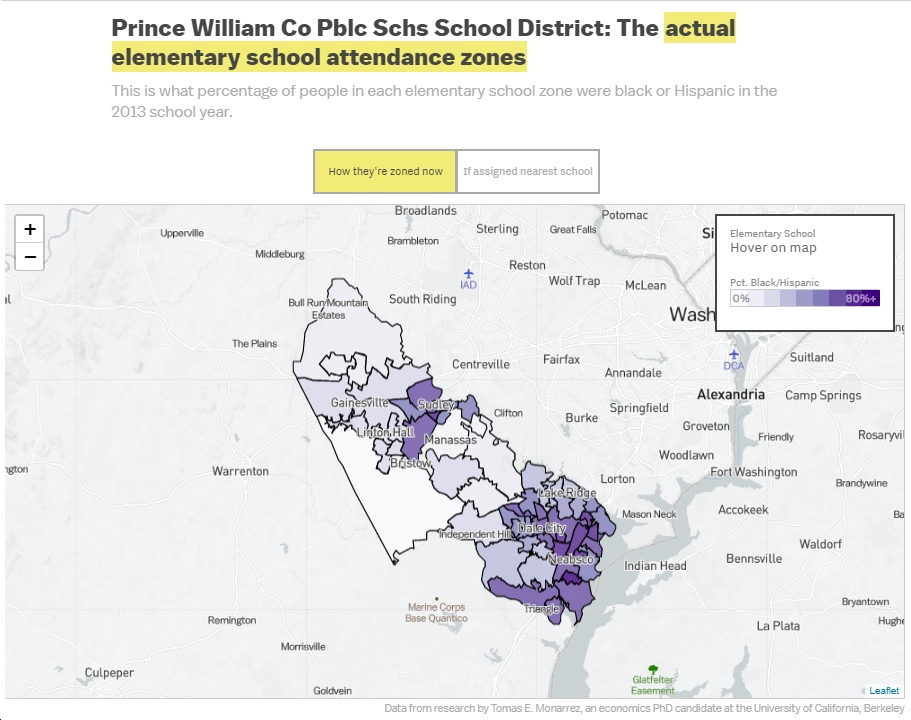 *The further west you go in Loudoun County, the less diverse you appear to get… 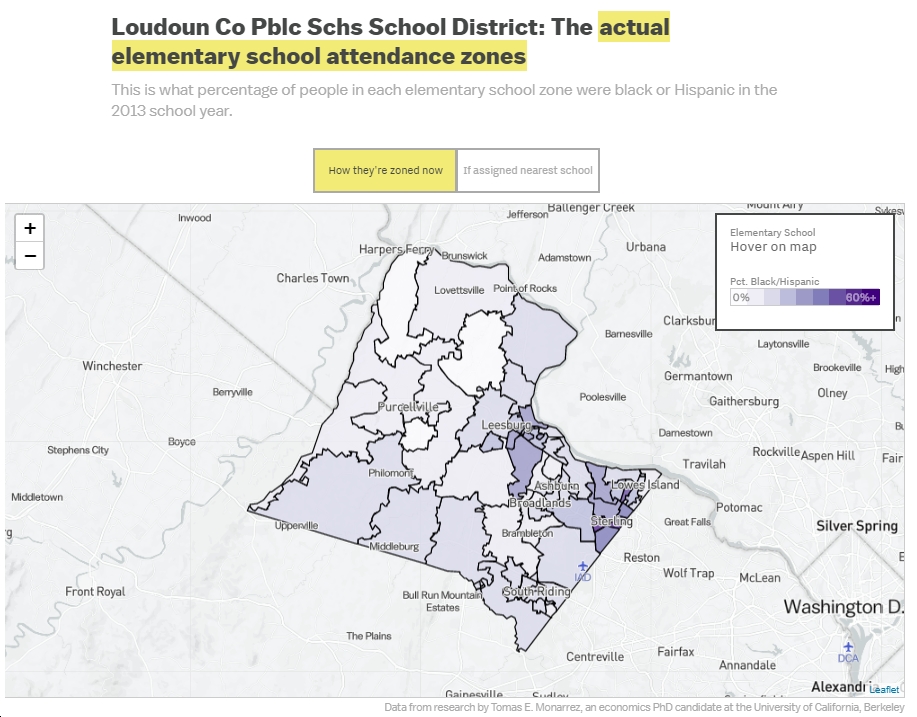 *Roanoke City looks starkly segregated from this map, with the eastern and southern parts almost all White, while the northwestern parts are heavily Black/Hispanic. 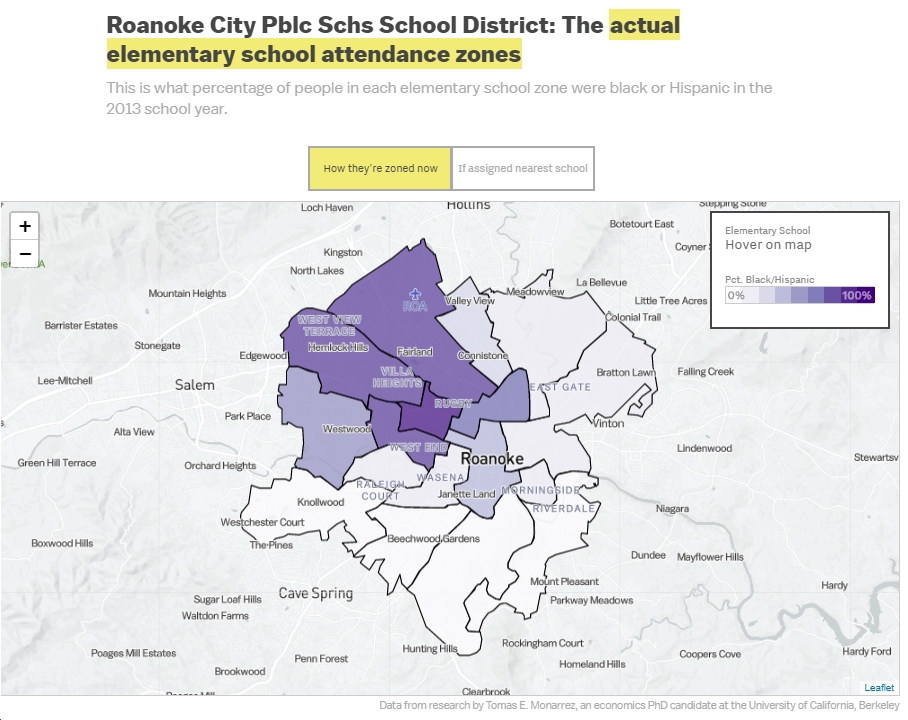 *Portsmouth seems to have a decent amount of diversity based on this map, not as starkly segregated as Richmond City or Roanoke… 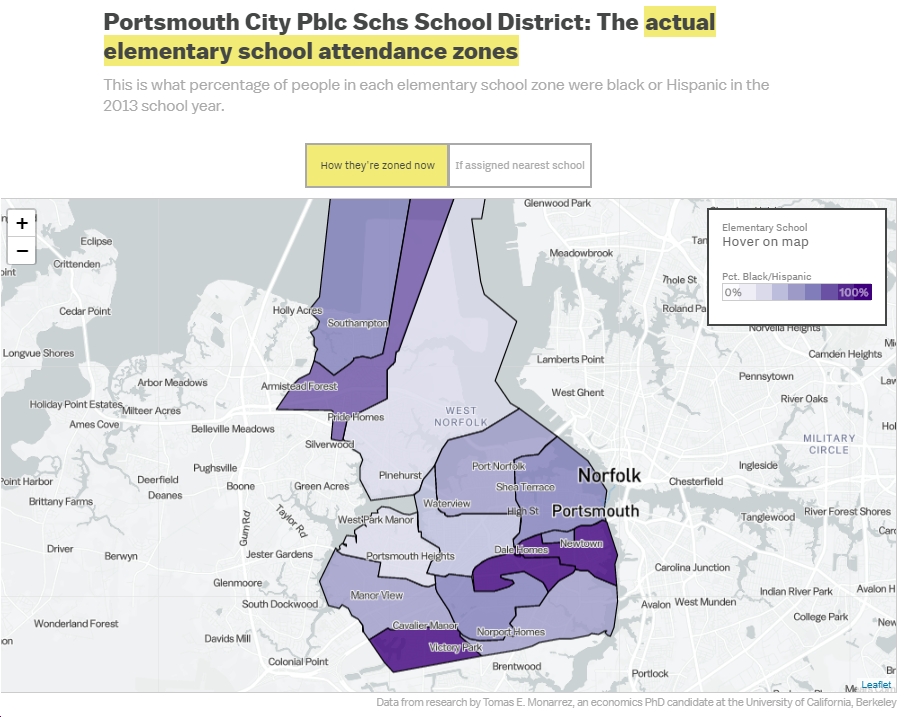 *Southern Norfolk is deep purple, which means heavily Black/Hispanic, while other areas are either light purple (relatively integrated) or mostly White. 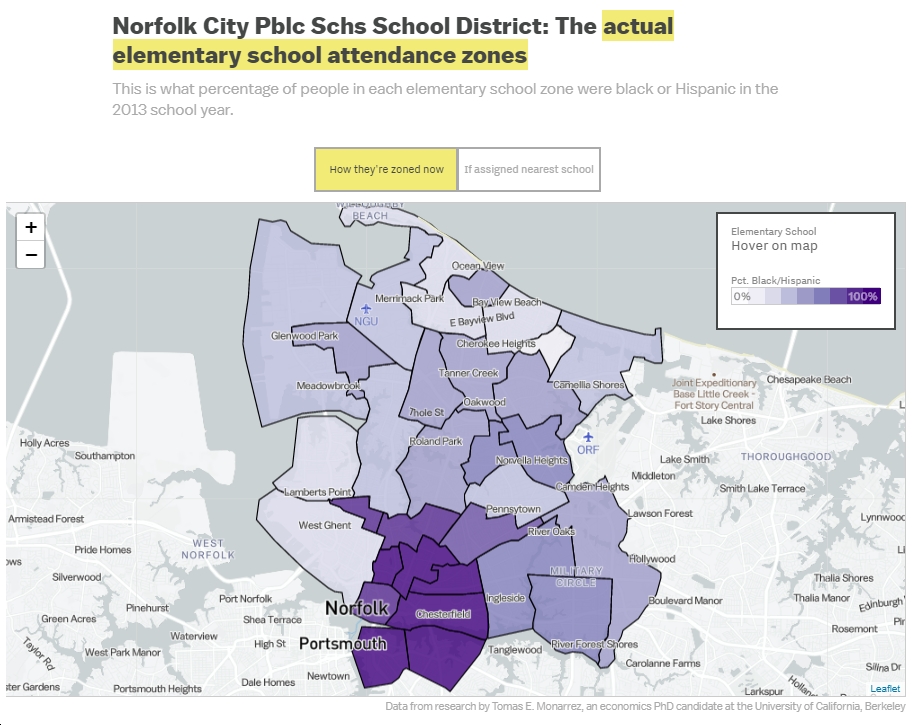 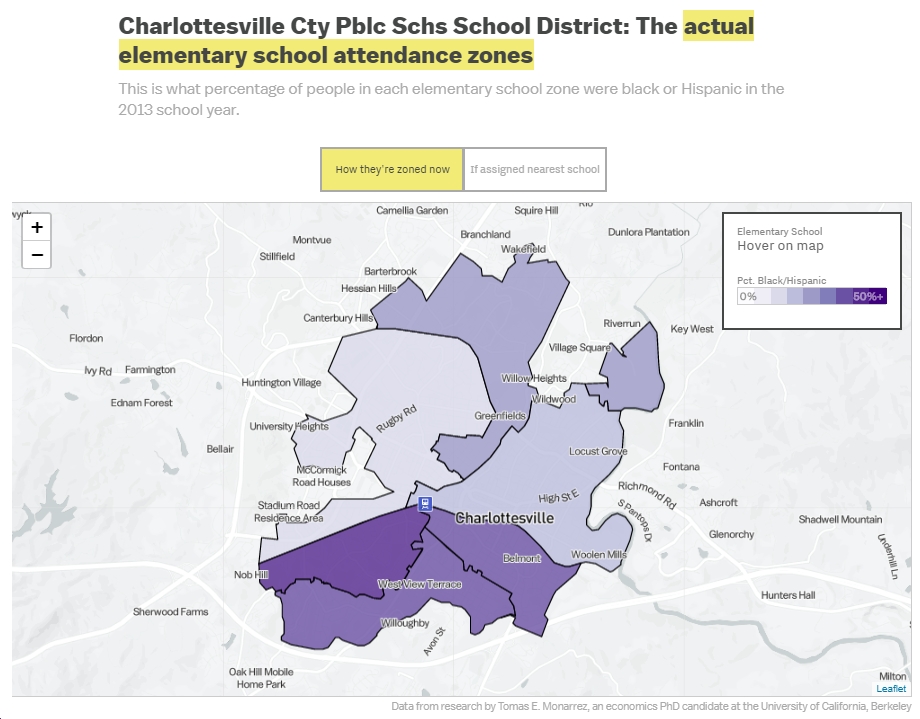 *More Black/Hispanic in the northern part of Winchester, varying shades of purple elsewhere. 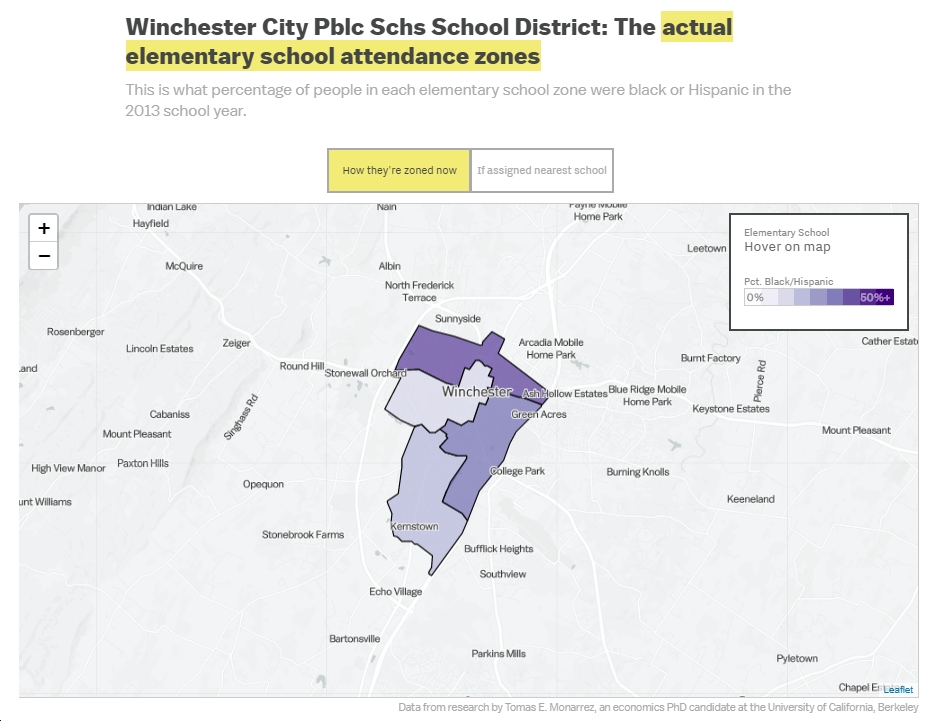 The Vox analysis also looks at what happens to segregation if students are assigned to the nearest school. Here are a couple examples — Fairfax County and Virginia Beach. Note that, as Vox points out, “in most districts, the actual school borders produced slightly less segregated schools than sending everyone to the nearest school — but it’s a small enough effect that they are essentially reproducing the underlying segregation.” 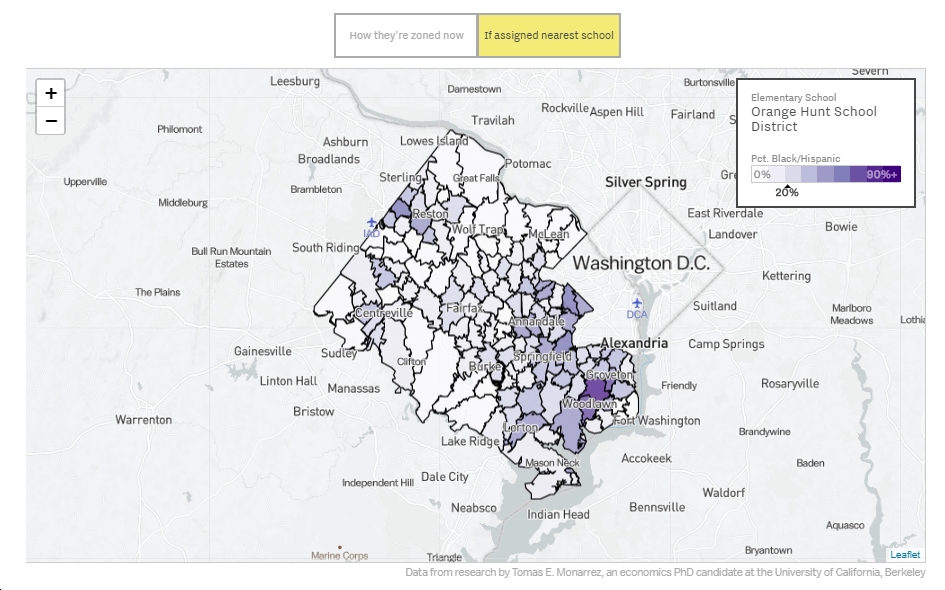 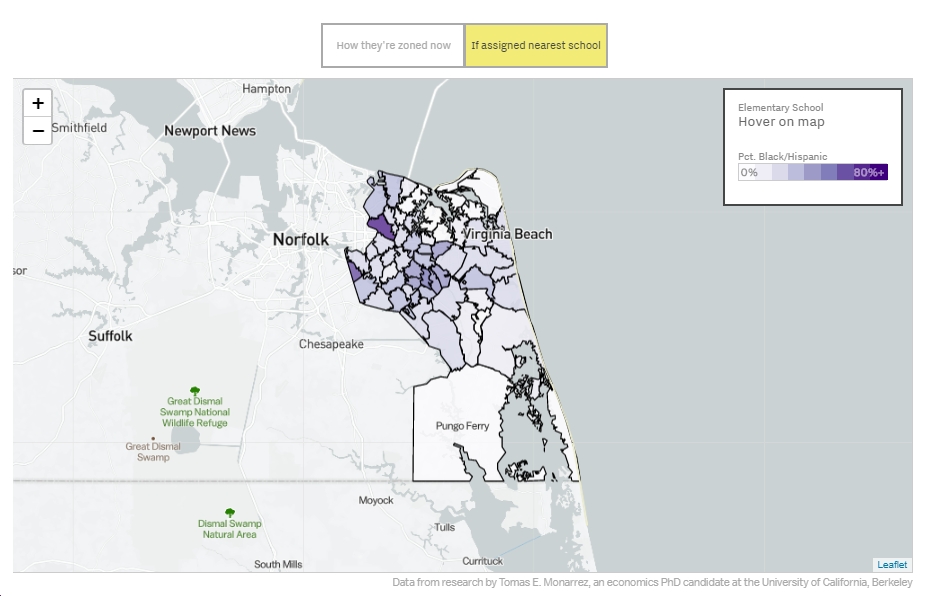 Why does this matter and why should we care? Lots of reasons; for instance:

This economic and racial segregation of students has real and pernicious effects. Schools with overwhelmingly black and Hispanic student populations usually have fewer resources and attract less experienced teachers, have higher teacher turnover, and have higher dropout rates, putting students of color at a disadvantage. Students in segregated schools also tend to make smaller gains in reading, according to a 2014 study conducted by the Frank Porter Graham Child Development Institute.

Yet more problems with segregation include these:

Metropolitan economies rely on labor of all kinds, often side-by-side, with high-end architects alongside plumbers, office towers near cab stands, and biotech inventors with security guards. But when low-wage workers pay an out-sized chunk of their paycheck just getting to work, or when suburban office parks locate beyond the reach of public transit, those inefficient patterns start to affect whole regional economies.

There are also at least two more reasons why the isolation of marginalized communities and low-skilled workers might be bad for everyone. Segregation (in multiple forms) may inhibit the new ideas and innovations that arise when people who are unalike interact with each other. And, quite simply, when poor people have better access to opportunity, society as a whole has to spend fewer resources addressing poverty and its consequences.

All of this effectively means that when wealthy people decamp for the suburbs – chasing, perhaps, a better school district for their children – they may ultimately be contributing to long-term trends in segregation that harm the entire region.