Want to know who the diehard, rabid anti-LGBT bigots in the Virginia State Senate are? Check out who voted “nay” on SB423 – a bill that “[a]dds discrimination on the basis of an individual’s sexual orientation or gender identity as an unlawful housing practice” – a few minutes ago: Dick Black, Charles Carrico, Ben Chafin, Amanda Chase, Ryan McDougle, Mark Obenshain, Mark Peake, Bryce Reeves, Frank Ruff and William Stanley. Of course, these are all Republicans. And all men, other than the seriously misguided (and bigoted) Amanda Chase. [UPDATE: see below for the same exact list of Senators on Sen. Adam Ebbin’s SB 202 to outlaw anti-LGBT discrimination in public employment]

By the way, perhaps the most amazing – shocking, even – vote on this bill came from Sen. John Cosgrove (R), who in 2005 sponsored a constitutional amendment forbidding same-sex marriage, and who in 2015 voted ” to reject bills aimed at repealing the Marshall-Newman Amendment that banned marriage equality.” Also, in 2016, Cosgrove voted for a so-called “religious freedom” bill that aimed to protect anyone refusing to conduct a same-sex marriage ceremony. Heck, just a few days ago Cosgrove voted to kill Sen. Surovell’s bill outlawing discredited, disgraceful “conversion therapy” on LGBT youth. So, yeah, this guy’s been a diehard, extreme anti-LGBT bigot his entire career. What changed on this bill today? Got me, but I guess we should be grateful for small favors or something… 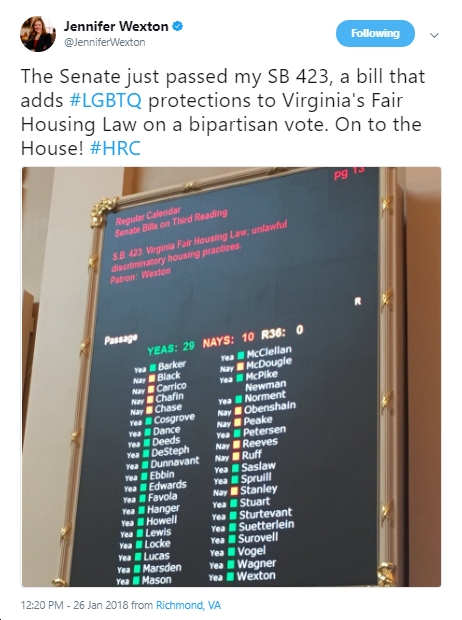