I hate linking to far-right websites, but sad to say, former Gov. Terry McAuliffe is busy talking to them for some crazy reason (in general, why on earth do Dems go on far-right TV, radio, blogs, etc???), so…here’s the link.  In short, TMac claims there’s no Democrat better able to go up against Trump in 2020 (“Who better to take on Trump than me?”) than…yep, himself.

The question is, does McAuliffe have a point? Here are 11 reasons that jump to my mind why he might be a strong candidate against Trump in 2020 – and 10 reasons why he might very well not be. 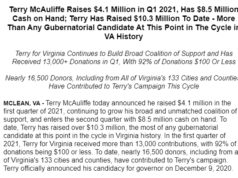