Is it time to cue up the Erectile Dysfunction jokes in the already-embarrassing, pathetic 2018 Virginia GOP U.S. Senate primary? Wait, “what,” you ask? Well, just yesterday, the Washington Post reported:

Obviously, this stuff is Beavis and Butthead-level pathetic (heh heh, he said “flaccid,” heh heh). But sad to say, this is the typical way that neo-Confederate, xenophobic extremist Stewart talks. Note that Stewart has proudly vowed to run “one of the most vicious races you’ve ever seen in Virginia,” just like his hero Donald Trump (whose campaign fired Stewart for insubordination and incompetence, by the way). Also note that Stewart’s the same guy who ran a vicious, race-baiting primary last year, one in which he attacked Ed Gillespie as (among other things) “one of the most weak-kneed, week-chinned, weak-jawed Republicans out there.” So that’s who we’re dealing with here – a bully, thug, white supremacist, and whatever other negative adjectives you want to apply to this Trump “mini-me.”

So anyway, this fine example of (the dregs of) humanity called House of Delegates Republicans “flaccid, soft and weak” for FINALLY moving towards acceptance – with gratuitously punitive conditions attached, of course – of Medicaid expansion in Virginia. One member of the House of Delegates, Nick Freitas, is a rival to Corey Stewart for the 2018 VA GOP U.S. Senate nomination, and apparently didn’t want that “flaccid” attack “hanging” around out there for very long without a response. So Freitas took to Twitter this afternoon, making clear that he “firmly” opposes Medicaid expansion in Virginia. 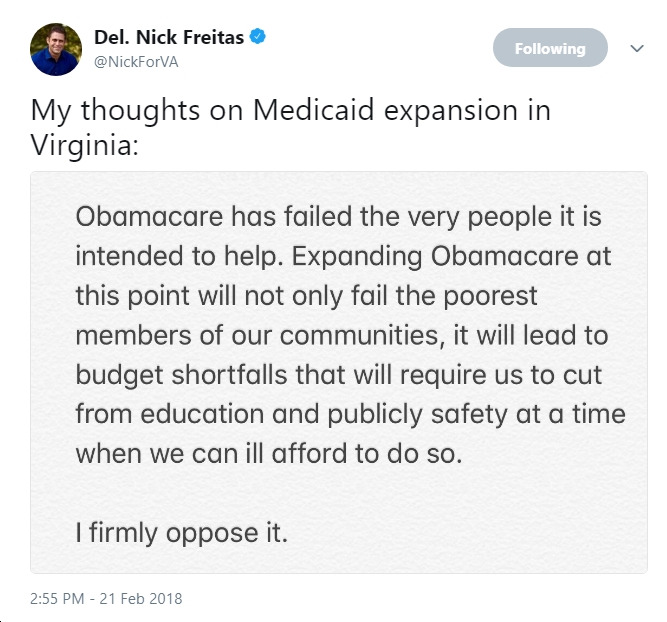 Other than the Beavis and Butthead-level Erectile Dyfunction references/jokes, witting or unwitting (and in Freitas’ case, I actually wonder if the use of the word “firmly” is unwitting, because this guy’s not exactly a rocket scientist), here’s the serious, substantive problem with both Corey Stewart’s and Nick Freitas’ mush-for-brains position on Medicaid expansion: it’s harmful to Virginia as a whole, as well as to the hundreds of thousands of working class Virginians who would continue to be denied access to healthcare coverage if Stewart and Freitas had their way.

Fortunately, it appears that at least some of Stewart’s and Freitas’ Republican compatriots are smarter than they are (not saying much, I realize). That’s why folks like Del. Terry Kilgore and House Speaker Kirk Cox are looking for ways to bring back billions of dollars in OUR MONEY, while covering hundreds of thousands more Virginians and boosting our economy and rural hospitals in the process.

So why isn’t Nick Freitas on board with his Republican House colleagues Terry Kilgore, Kirk Cox, etc? Perhaps because…I dunno, just spitballing here…Freitas is running for the Republican U.S. Senate nomination and needs to appeal to the hard core of the far-right Virginia GOP “base?” Perhaps because Freitas is competing to out-crazy the craziest (Corey Stewart)? Finally, perhaps Freitas simply doesn’t want to leave Corey’s “flaccid” charge, er, “hanging” out there? Beavis-and-Butthead “heh.”

Whatever the reasons for Freitas coming out “hard” against Medicaid expansion the day after Stewart laid down the challenge to his manhood, the bottom line is that this is the latest example of why we Virginia Democrats cannot afford to let up or take anything for granted in 2018. Instead, we need to be focused on helping Sen. Tim Kaine win reelection by a YUGE margin in November — to help downballot candidates, of course; but also to send a clear, resounding message to Virginia Republicans that their brand of extremist nuttery and bigotry is not welcome here in the Commonwealth.

Video: Sen. Tim Kaine Says There HAVE TO Be Consequences for Trump Being “willing to countenance and encourage violence to overturn an election and...