WTF is this crap from the Sully District (Fairfax County) Republicans??? A few comments on Facebook sum it up pretty well (see below). Also note that the Fairfax County GOP is also home to Fredy Burgos…yeah, this guy. Let’s see how long it takes VA GOP Chair John Whitbeck to move against the Sully District GOP for this racist garbage. As always, not holding my breath.

“They absolutely HATE HATE the fact that Obama had no scandals, no drama during his 8 years. Meanwhile, a year into this clown’s term, we have four people indicted and a full-blown investigation. They can’t stand that!” – Lola Arce de Quintela

“Yet another illustration that Republicans are a bunch of racists, including in Fairfax County. No wonder Kyle McDaniel left the GOP in disgust.” – Jayant Reddy

“In one picture they let us know how they feel about communities of color. I had to say something to them but it is probably deleted by now.” – Donte Tanner 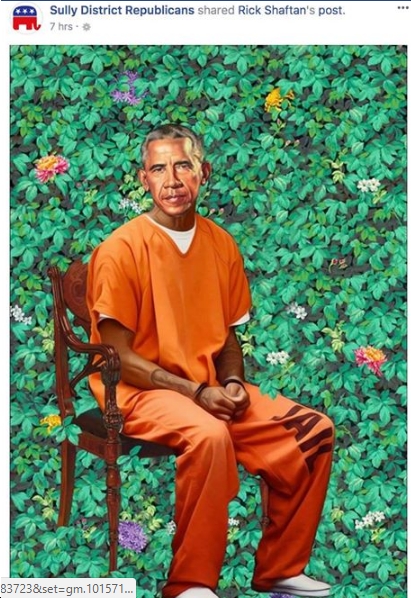