Great, albeit completely unsurprising, news from the Virginia Sierra Club. This poll, in addition to showing that Virginians overwhelmingly (67%-27%) support moving towards 100% clean energy by 2030, also demonstrates how wildly out of touch the Virginia GOP, Dominion Energy and the fossil fuel folks are. How about our elected officials instead listen to the 67%-27% majority of Virginians who want 100% solar, wind and energy efficiency – and soon?

The poll, released today by the Sierra Club, shows that more than two-thirds of  Virginia voters would favor a goal of generating 100 percent of the state’s electricity using clean and renewable sources like solar and wind by 2030. Support comes from across the political spectrum, with 85 percent of self-identified Democrats, 62 percent of independents, and 46 percent of Republicans endorsing this goal.

“We’re seeing exciting progress and leadership on renewable energy at the local and state levels. Virginia’s voters have spoken and said that it’s time for our state to step up and act in our best interest by transitioning away from dirty fossil fuels to 100 percent clean renewable energy,” Alice Redhead, Community Outreach Coordinator for Clean Energy at the Sierra Club Virginia Chapter, said. “Virginians know that 100 percent clean energy is not only attainable, it’s a smart investment for our future, and we all will reap the benefits for our economy, health, and environment.”

“The results of the poll are incredibly promising, showing that Virginians are excited and committed to our clean energy future,” Kate Addleson, Director of the Sierra Club Virginia Chapter, said. “Virginia has the potential and will to lead the region in moving away from dirty, outdated fossil fuel burning power plants to clean energy. Virginians are saying loud and clear  that they want 100 percent clean energy and this commitment should be acknowledged and prioritized by our leaders..

61 cities across the country have now committed to transition to 100 percent clean and renewable energy.

Other key findings from the poll include:

“State and local leaders across the country should take note: our most recent survey found that at least two-thirds of voters in every state we polled support transitioning to 100% renewable energy sources and a majority would feel more favorable towards a local official if they supported 100% renewable energy,” Elizabeth Sena, partner at Greenberg Quinlan Rosner Research, said.

GQR conducted the survey among 500 registered voters in Virginia between December 13 and 17, 2017 using live interviewers. The poll has a margin of error of +/- 4.4 percent at the 95 percent confidence level. 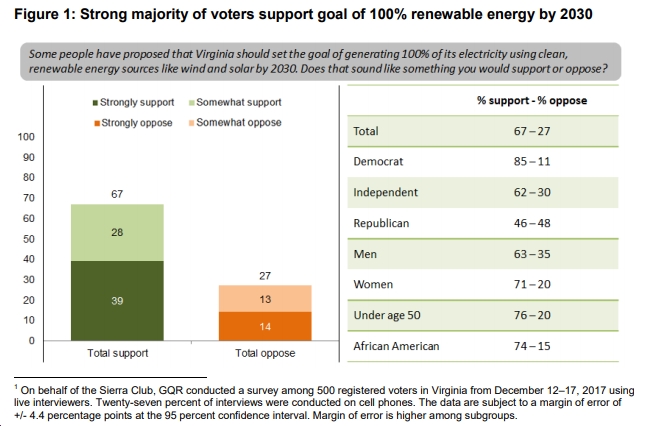 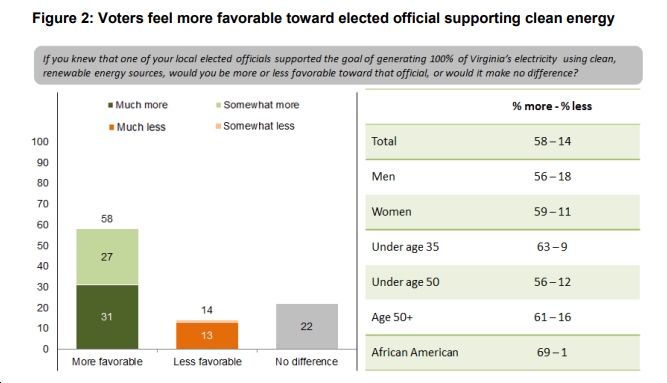