Per the Washington Post story, “Facebook post claiming guns could have prevented the Holocaust met with backlash,” other than reiterating the fact that this laughable – not to mention insulting, offensive, batshit crazy, etc. – “theory” has been completely debunked many times, I’d simply add that even though the Facebook page in question was NOT that of the Virginia Beach GOP, that party richly deserves to be doing “damage control” on this. Why? Because the Virginia Beach GOP has been a cesspool of extremism and bigotry for many years. For instance, remember when the Virginia Beach GOP CHAIR forwarded a racist email (“my Dog is black, unemployed, lazy, can’t speak English and has no frigging clue who his Daddy is”)? And remember when that Chair resigned, but still didn’t own up to the racism, instead claiming “he was first getting familiar with the Internet.” Riiiight. Or remember when Bill DeSteph, now a Republican State Senator from Virginia Beach, wrote that “Muslems [sic] Build Mosques to Represent Islamic Supremacy Over Their Enemy?” Or remember when then-Delegate-from-Virginia-Beach Bob McDonnell (R-of course) claimed that “‘certain homosexual conduct’ could disqualify a person from being a judge because it violates the state’s crimes against nature law” (note: in response, McDonnell was asked by a reporter if he had ever committed such a crime, and he implausibly responded “Not that I can recall”). So yeah, that’s the Virginia Beach GOP for ya. Which is why, even though this latest controversy was “only” from a Facebook account by a Virginia Beach GOP activist, not the party’s page itself, it seems to me that the Virginia Beach GOP has a lot of “damage control” to do for a lot of reasons; definitely not feeling sorry for them, that’s for sure. 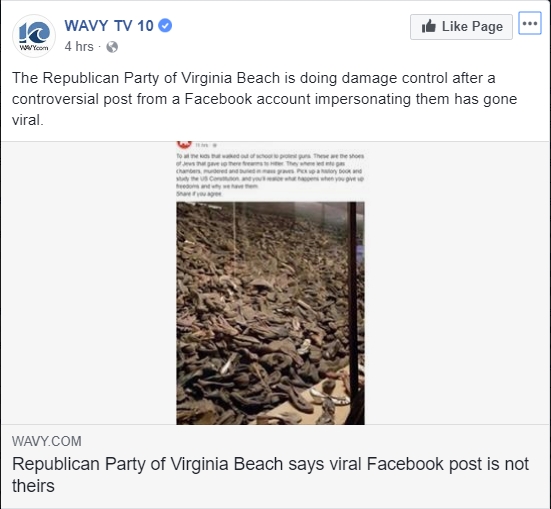 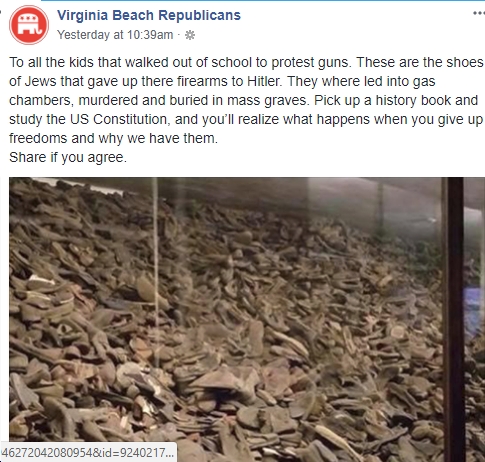