lowkell - June 8, 2019 0
Need another reason to vote for Alicia Plerhoples for Fairfax County Board of Supervisors Chair? How about this? Very cool! 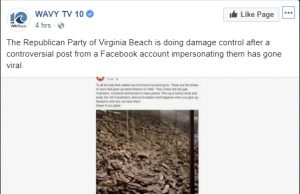 Why the VA Beach GOP Richly Deserves to Be Doing “Damage...

lowkell - April 2, 2018 0
Per the Washington Post story, "Facebook post claiming guns could have prevented the Holocaust met with backlash," other than reiterating the fact that this...

lowkell - January 29, 2018 1
Excellent speech by Del. Debra Rodman (D-Henrico), with the obvious subtext that racism and anti-Semitism have been on the rise here, in America, during...

lowkell - January 31, 2017 0
"Today, on the Floor of the House of Delegates, I expressed my horror at the President's new Executive Order, which closes the door to...

Cuccinelli compared slavery to abortion in 2008 The outspoken conservative and candidate for governor made an almost identical statement in a 2008 "Cuccinelli Compass," a regular letter he writes to supports to supporters, The Washington Examiner has learned. In it, Cuccinelli reviews a biography on British abolitionist William Wilberforce and draws a connection between Wilberforce's fight against slavery to his own efforts in the Virginia Senate to curb abortions in the state.

The story also offers Cuccinelli's defense of those remarks:

“Evil does not need your help, just your indifference”

"What We Carry," a Holocaust Commission of the United Jewish Federation of Tidewater inspired documentary, premiered in Norfolk today. It is the recounting of the travails of four holocaust survivors; real Virginians, Felix. Since the making, two have passed...the other two were present to give faces to courage.

One Sunday evening, when I was 12 or 13, my father took me to see two World War II documentaries. They were shown at the local theater where B movies regularly played; there, I had witnessed mutants and/or aliens destroy Tokyo and/or the world dozens of times. His interest was in the Pacific, where he had fought in two great amphibious assaults. Even that night, I didn't remember much of the Pacific campaign at all. What I did and do remember to this day was the startling record of cruelty that, in the arrogance of evil incarnate, had been recorded on film for posterity. I wondered, when I read of this project, how those involved had put human faces on that barbarity.

It helped that the raw footage of my first introduction had been edited (not to say totally) for the intended audience of this project, which, by coincidence is 12 to 13 year olds. It was heartening that the Roper Theater, on a rainy Sunday afternoon, was filled beyond capacity. There was a wave of warm patriotic pride as the national anthems of the United States and Israel were sung in chorus by the audience as part of the introduction; then we settled in for the journey.