Audio: Del. Michael Webert (R-18th) announces big for VA-05 GOP nomination, emphasizes how hard core he is on guns and against Medicaid expansion. Barf. He’s also against what he calls “amnesty” for immigrants.

Audio: Martha Boneta says she considers the fifth “to be family.” Says she wasn’t intending to run, but after lots of “thoughts and prayers” and encouragement in the last 24/48 hours, she is “right now…inclined to throw my hat in.” She also says she “love[s] Tom Garrett with all my heart.” She says Trump “has done more for our country than other president in the period of time he’s been in office.” Hahahahahahahaha. “We need the most viable candidate that is going to CRUSH the opposition.” “The establishment doesn’t want a candidate they can’t control.” “I don’t want to play [the woman] card.” 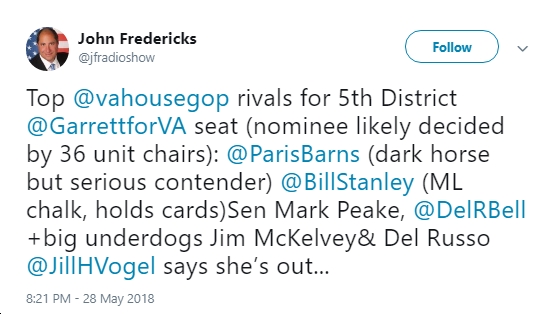 Denver Riggleman announces for VA-05, vows to “drag the swamp monsters to dry land” – I guess he means Trump and his corrupt gang? LOL 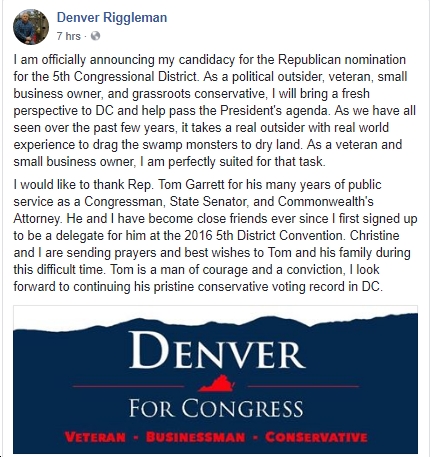 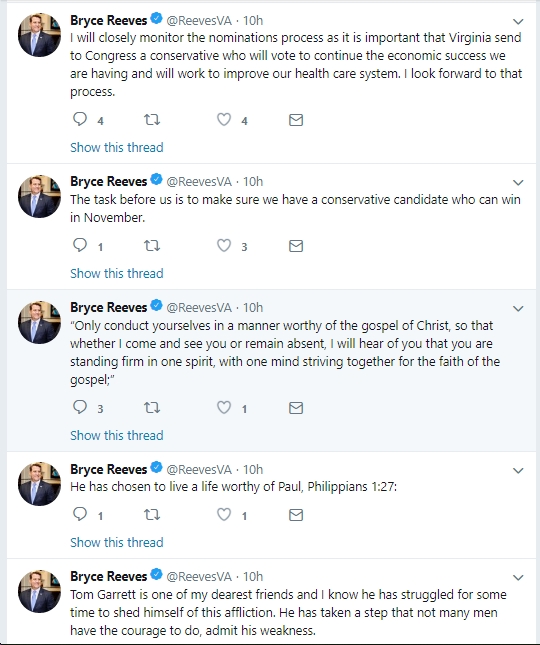 Yep, guess who’s running…Martha Boneta in VA-05…and she doesn’t like us calling her out for all the extremists and scumbags she hangs with (see photos of her with Sheriff Clarke, Dick Black, Michael Flynn, Eric Trump, Sebastian Gorka, etc.) 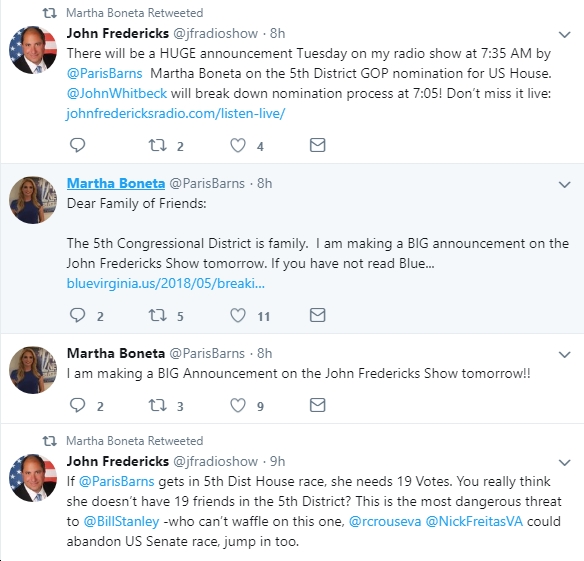 The other day, I wrote a post urging Rep. Tom Garrett (R-VA05) to hang in there, because we Democrats would loooove to have a weakened, scandal-ridden Republican incumbent to run against this summer/fall. Sadly – but not at all surprisingly, given all the rumors flying around out there about him, plus the chatter over on the Virginia Freedom Caucus Facebook page about “more shoes to drop,” etc. – Garrett didn’t take my advice and instead just announced that he’s outta there after all. 🙁

Rep. Thomas Garrett (R-Va.) announced Monday that he is struggling with alcoholism and will abandon his run for a second term in Congress so he can focus on recovery and his family.

Garrett, a member of the conservative Freedom Caucus, is the 44th Republican to retire or announce they will not seek reelection to the House this year, according to CNN’s retirement tracker. Many are leaving in anticipation of a strong Democratic performance in Congressional races this fall and out of frustration with partisan politics in Washington.

So that leaves VA-05 Republicans with the job of finding a substitute candidate to run against Democratic nominee Leslie Cockburn. A few names I’ve heard bandied about are (in descending order of likelihood): 1) far-right-wing activist Martha Boneta, 2) Del. Rob Bell (R-58th), 3) State Sen. Jill Vogel (R-27th), who was the GOP nominee for Lt. Governor in 2017; and 4) Del. Nick Freitas (assuming he loses to Corey Stewart on June 12; also note that he lives just outside VA-05, which would complicate matters).

As for State Sen. Bryce Reeves (R-17th), another name I’ve heard bandied about, he was at Garrett’s bizarre press conference the other day) in solidarity his buddy. However, this might be more because – as rumor has it – that Reeves is likely going to get primaried in 2019, that he is terrified of it, and that he showed up with Garrett to show support and to make sure to be in the spotlight. So while it might make sense that Reeves would jump ship from the State Senate for the VA-05 congressional nomination, as it’s quite possible he won’t be a State Senator after 2019, it’s doubtful he will actually do so from what I’m hearing.

Personally, my money is on either Vogel or Boneta as the likely frontrunner to replace Garrett on the ballot. We already know a lot about Vogel – none of it good (other than her getting trounced by Democrat Justin Fairfax) – since she ran for Lt. Governor last year. To give you an idea of what we’re dealing with when it comes to Boneta, see below for some photos of her with a variety of far-right figures. Also see this article, which talks about a September 2016 event with Trump running mate Mike Pence “headlin[ing] ‘Pumpkins and Politics,’ a celebration of agriculture, property rights and conservative values at Martha Boneta’s Liberty Farm in Paris.” Charming, eh? 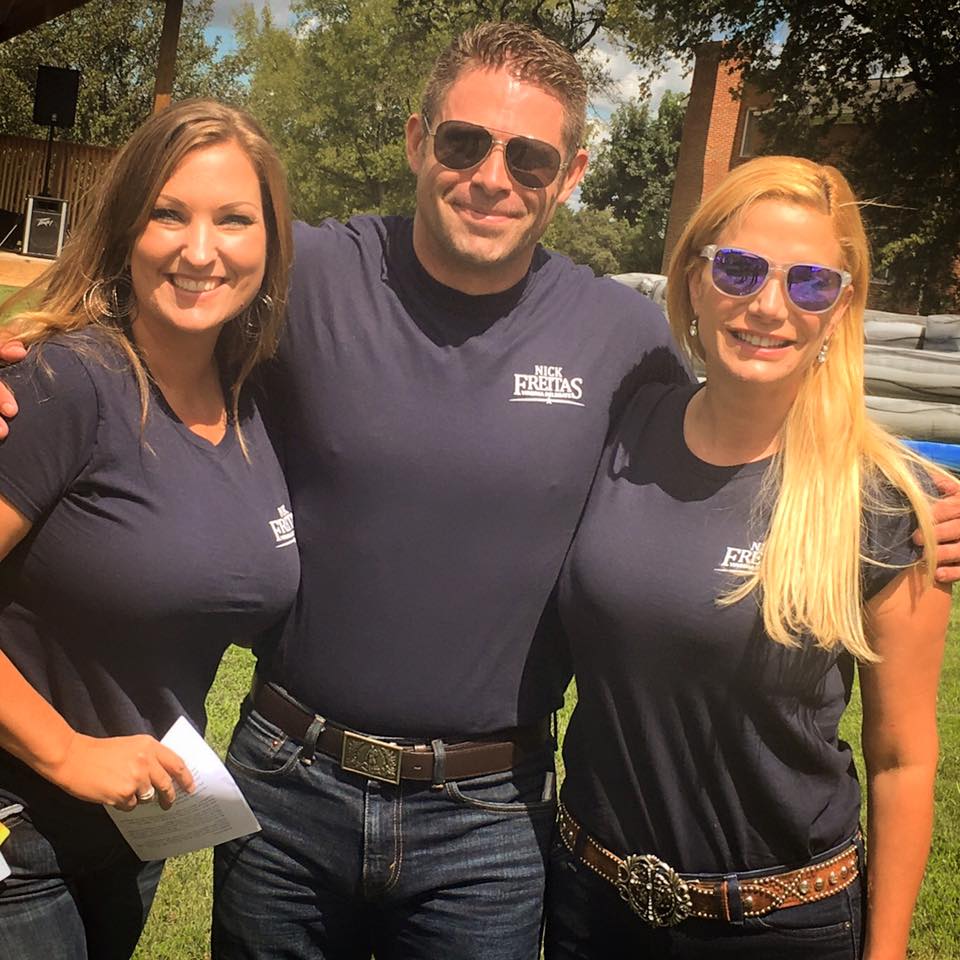 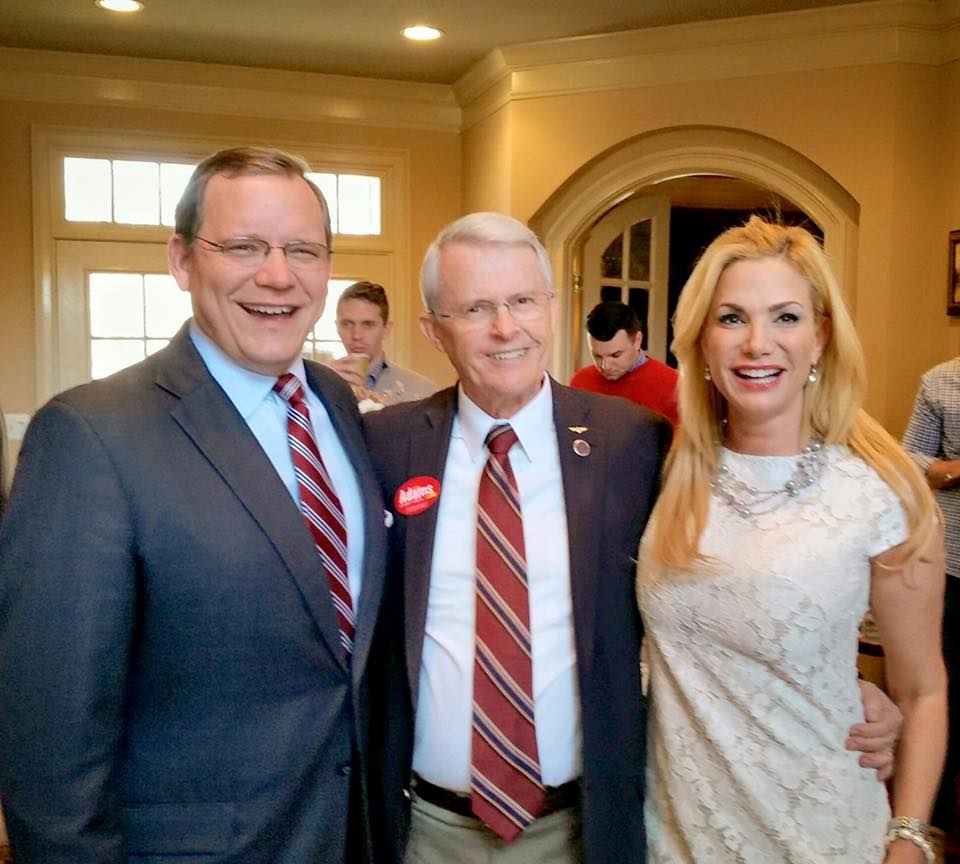 Boneta with Sebastian Gorka…yeah, this guy 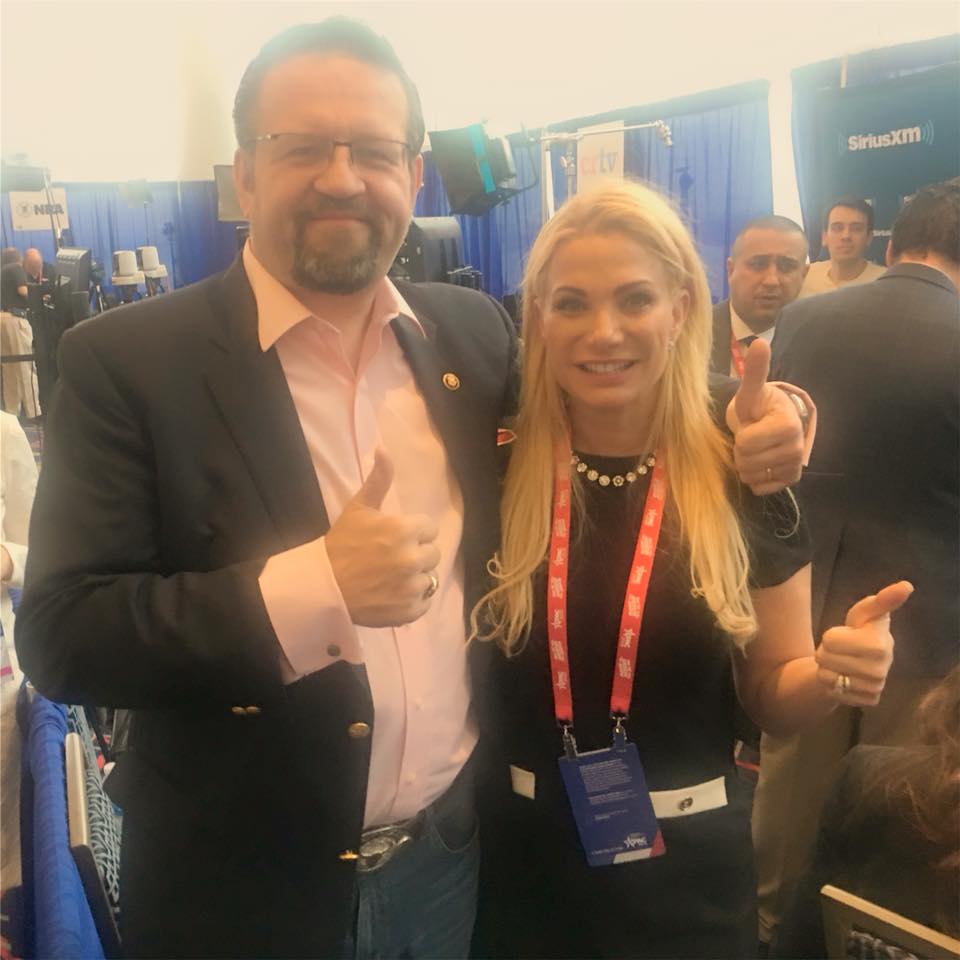 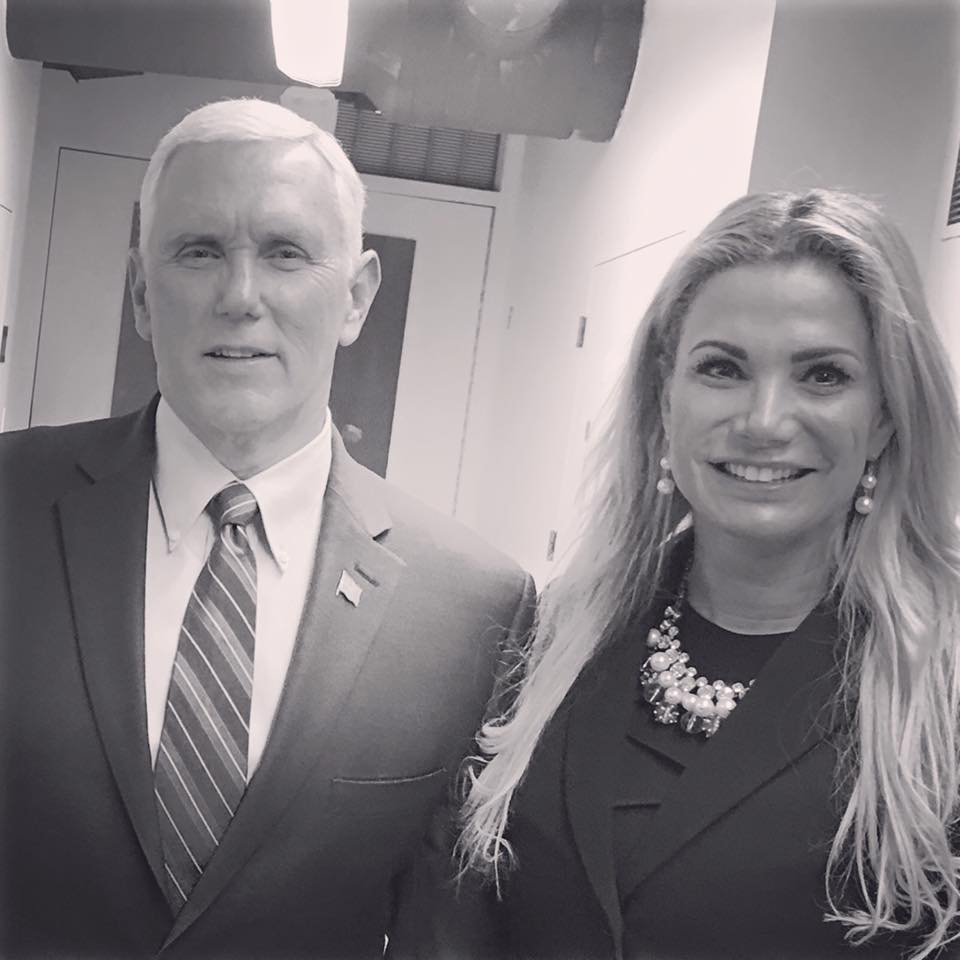 Boneta with extremist nutjob Wayne LaPierre of the NRA 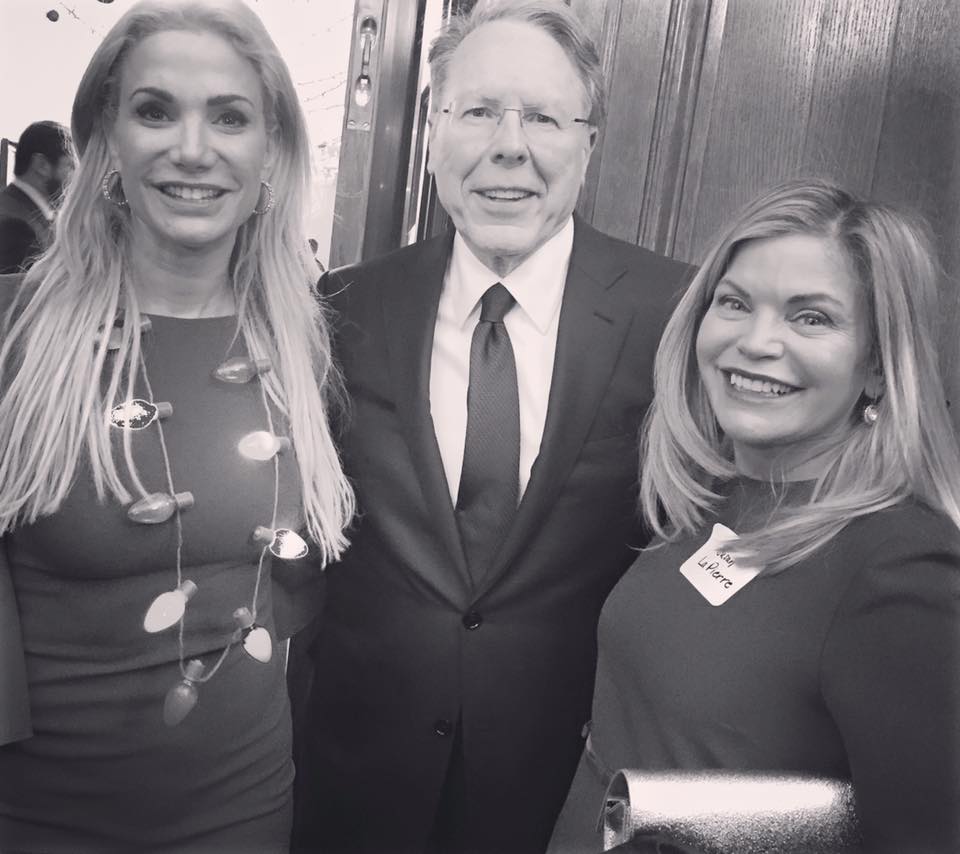 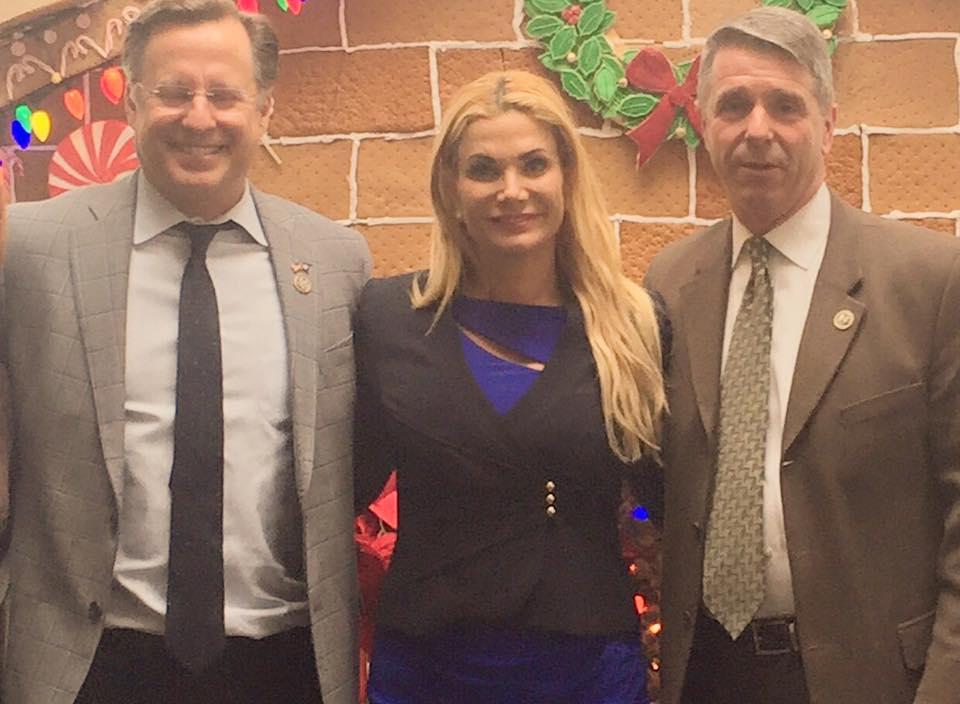 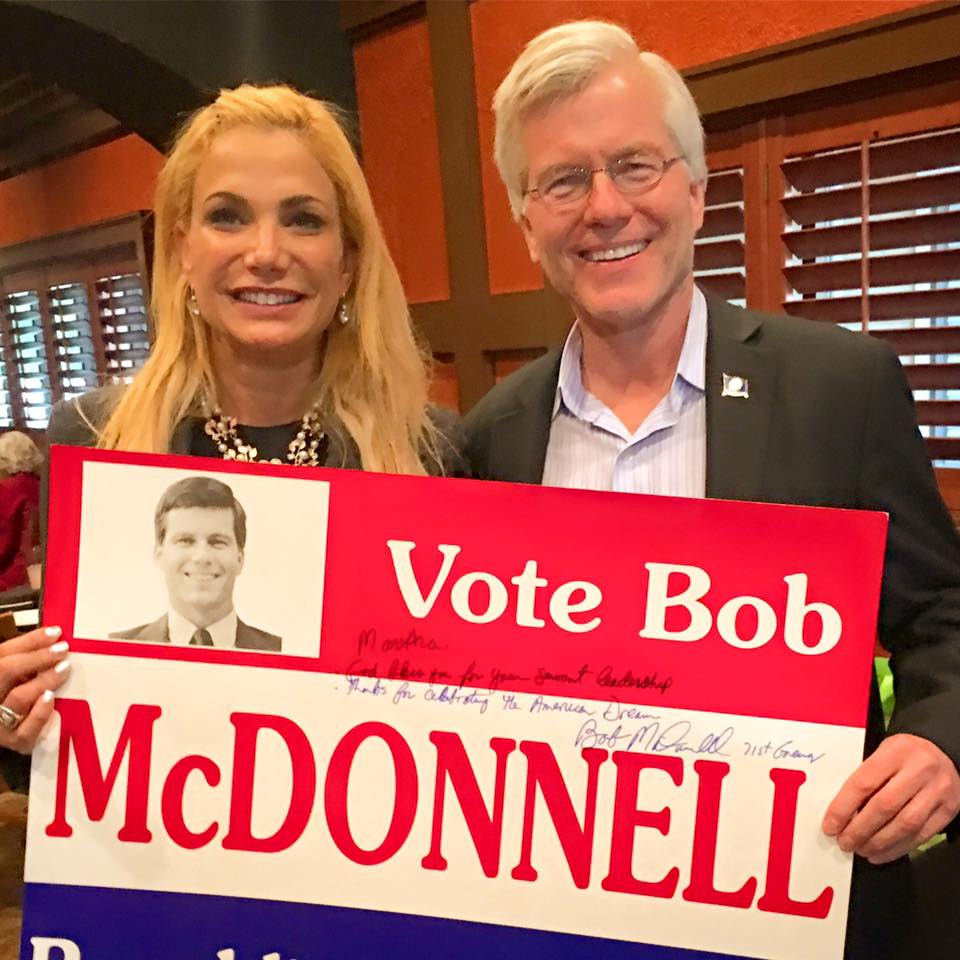 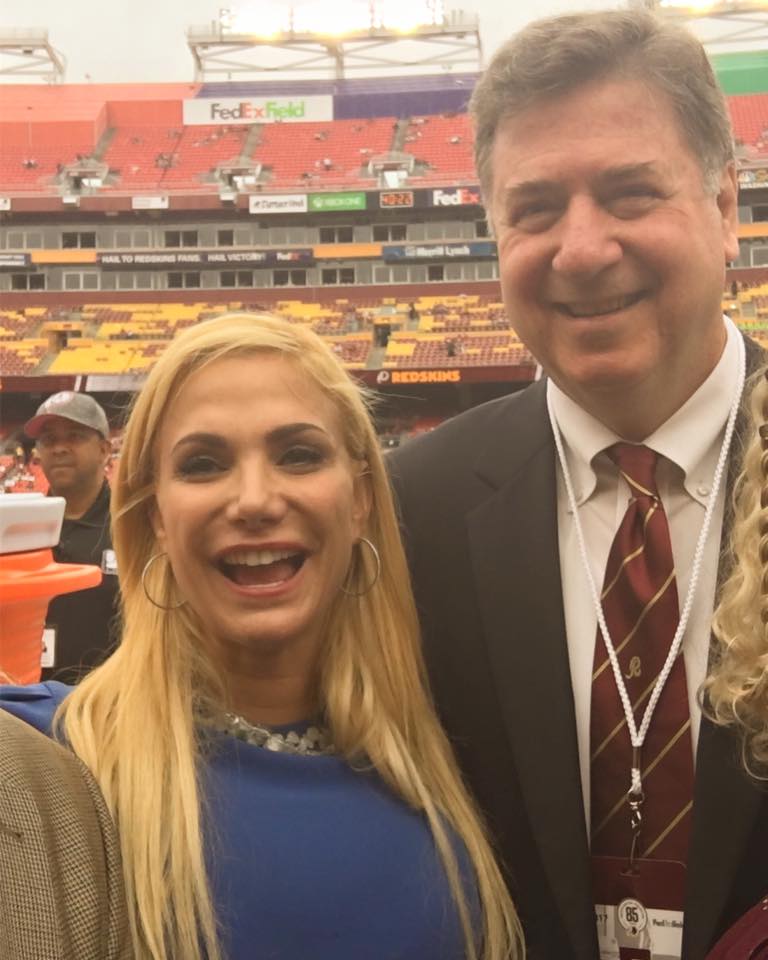 Boneta with one of the craziest, more f’ed-up people in America. As one person wrote on her Facebook page: “[Sheriff David] Clarke is insane, a complete nut case. Take it from someone who lives in Wisconsin and the Milwaukee area. This guy belongs in a straight jacket, locked up in a padded room where he can’t hurt himself or anyone else. Ask him to explain all the recent deaths in his jail? Ask him why he’s not here doing his job? He’s looking for a new job because he’s being investigated here and there’s not a chance that he’ll get reelected.” 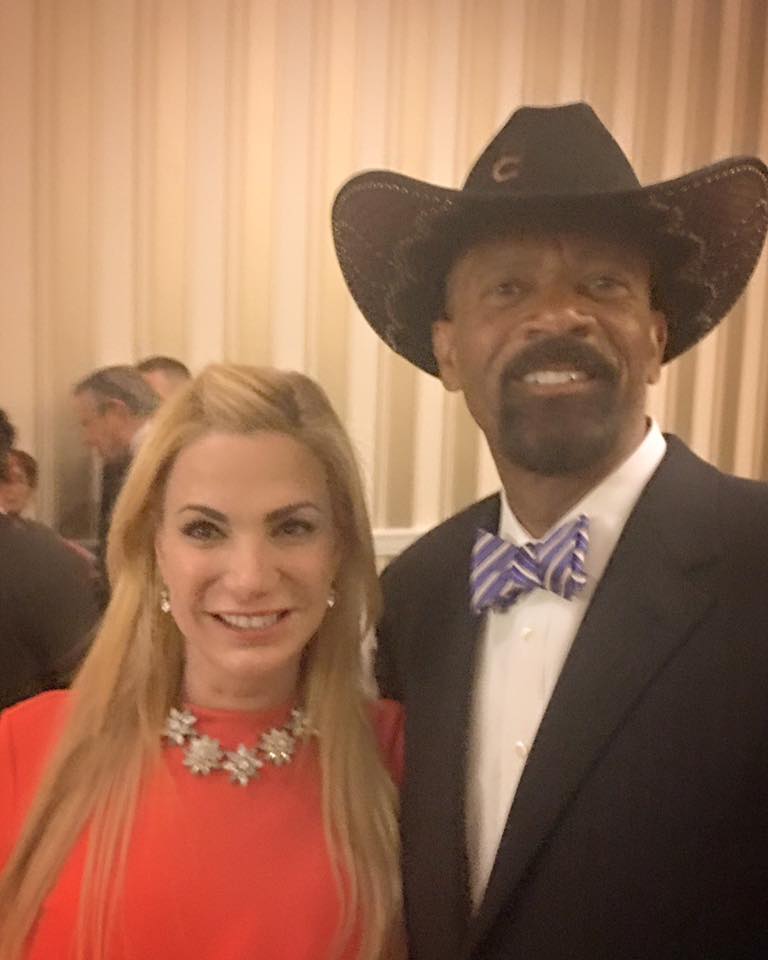 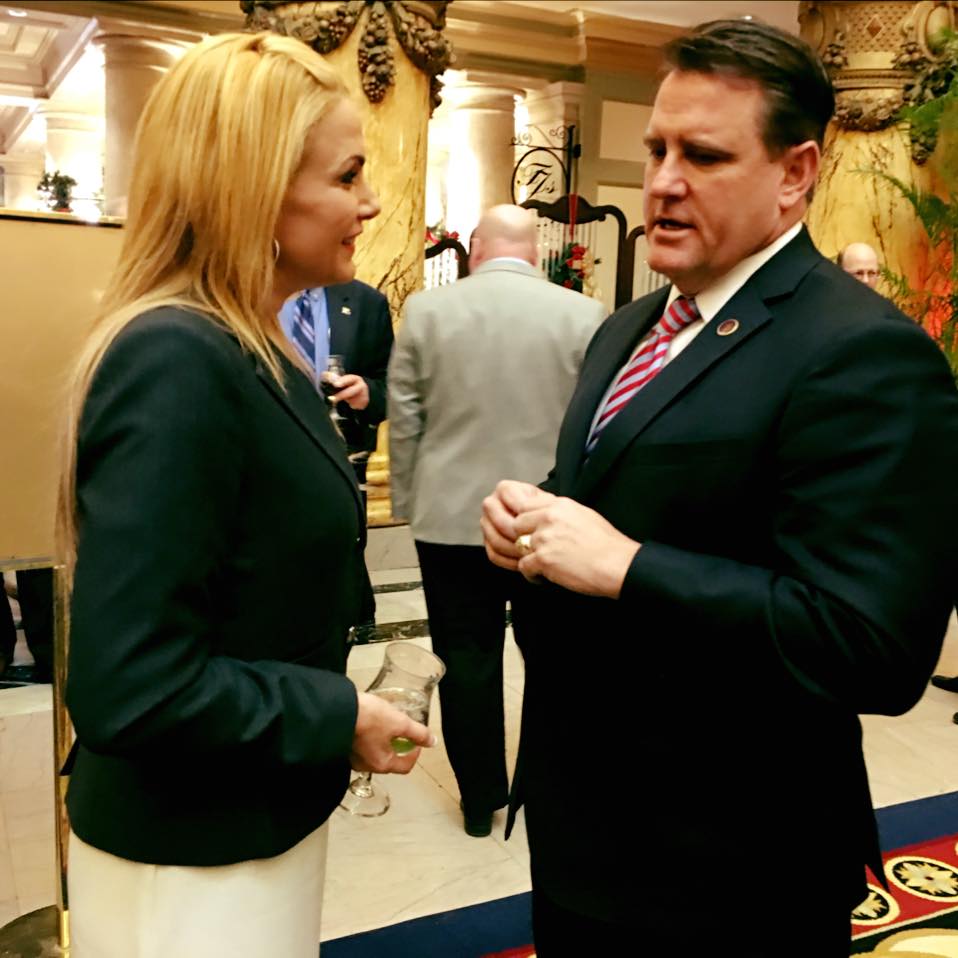 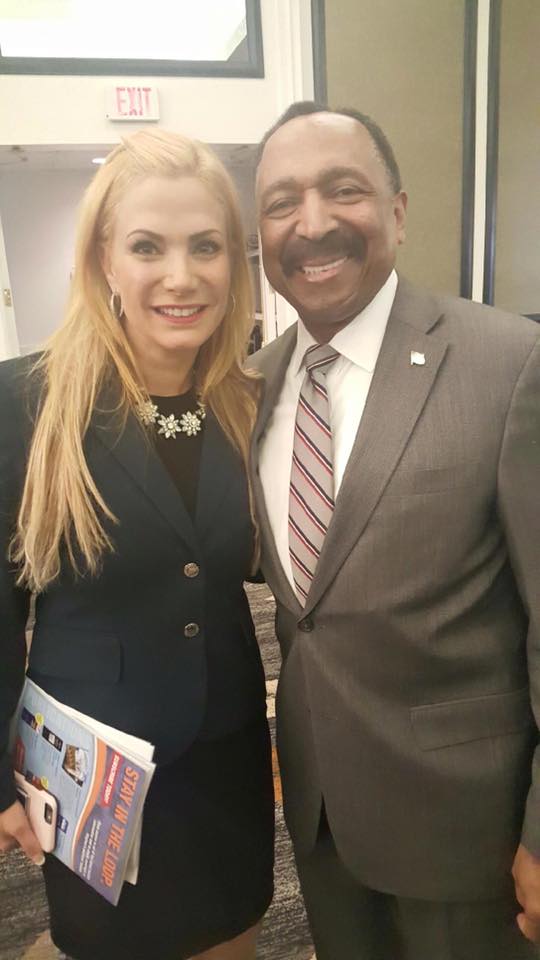 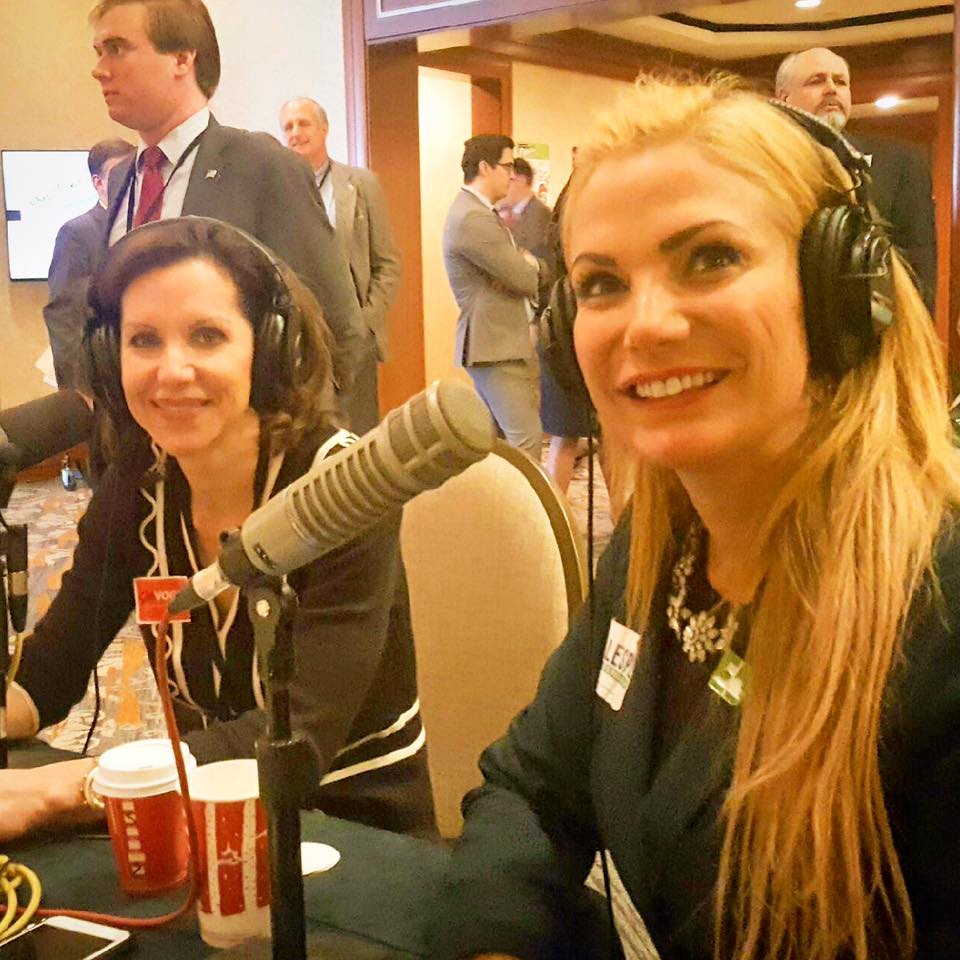 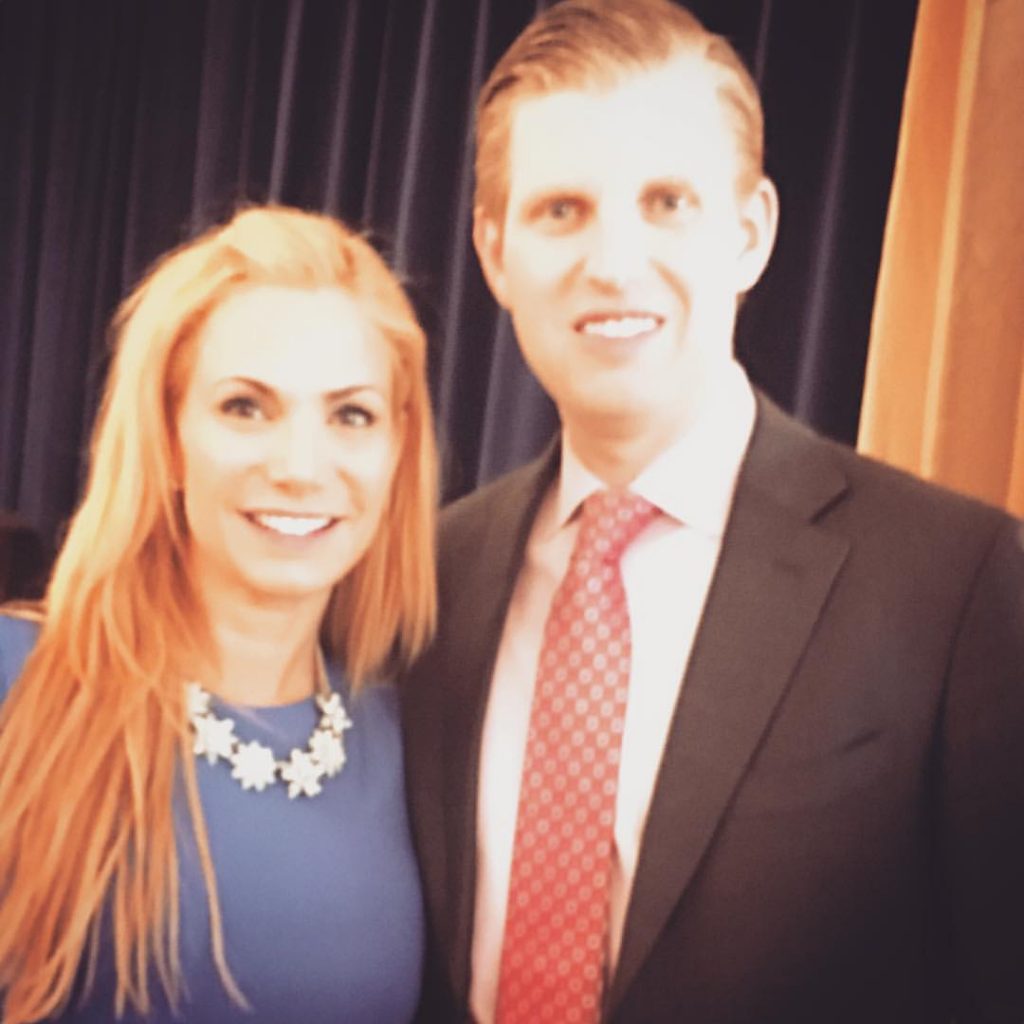 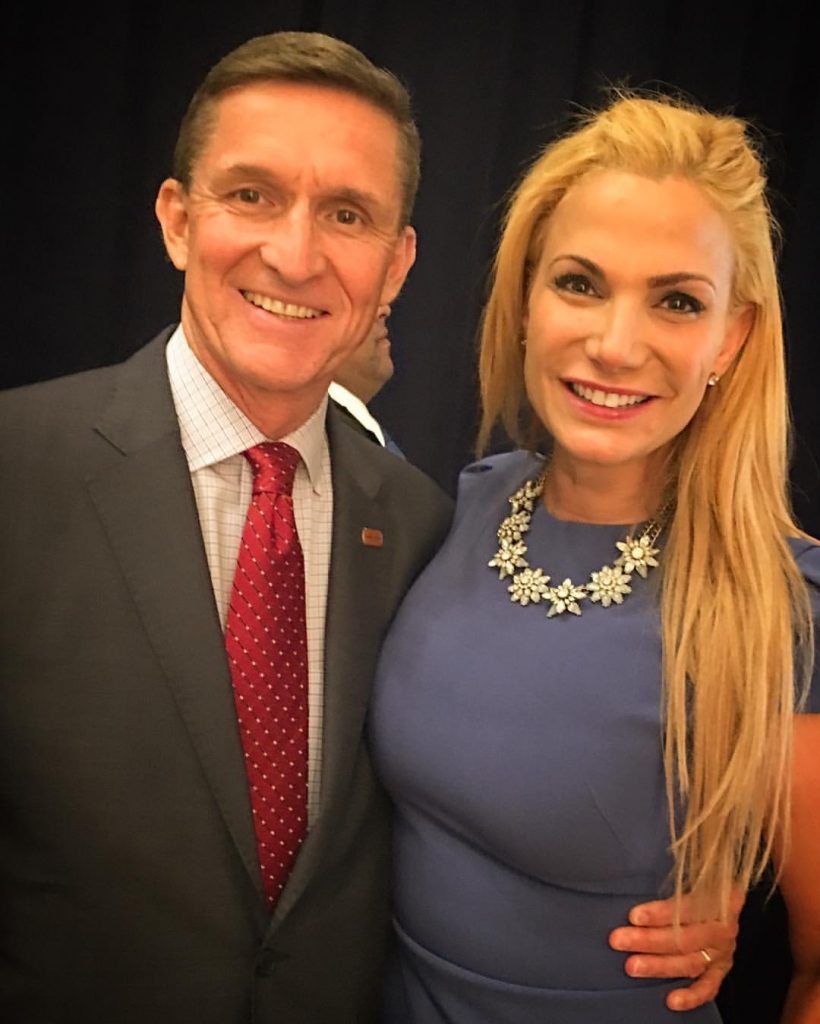