With “Lockdown,” the first TV advertisement for the Democratic nomination in the 10th District, Alison Friedman focuses on gun safety (see her press release below.)  As a parent who has received text messages about emergency lockdowns in my children’s schools, the opening struck a real chord:

Too many parents know the feeling an email from the county:  There’s a lockdown. You search for the name of your child’s school. And, time stops …

The insanity of 21st-century America and the power of the manic NRA over American politics leads to these moments of “And, time stops …” And, far (FAR) too often in 21st century America, that stopped time leads to lifelong pain and anguish for parents, siblings, friends, and communities with dead and injured students in yet another mass school shooting. 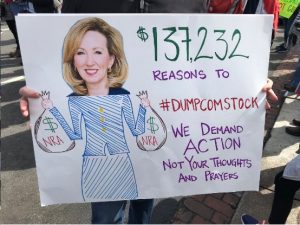 Barbara Comstock, the Republican currently occupying the 10th District’s Congressional Office, will not do anything to address this.  Perhaps it is philosophical, placing ownership of a deadly weapon above the lives of school students. Or, perhaps it is more transactional and, as one of the largest recipients of NRA largess, it is “because Comstock sold our kids safety to the NRA.”

…can make our schools safer by expanding background checks closing gun show loopholes and banning assault weapons.
If you are a 10th District voter, you know that Comstock will not fight for such basic, rational measures to move toward ‘gun sense’ in America.  Friedman is making the case, with this ad, that she will.

UPDATE NOTE:  Having now received in mailers and otherwise, many of the VA10 Democratic primary candidates are similarly displaying the “Moms Demand Gun Sense” in ways that certainly suggest ‘endorsement’.  This suggests that the problem is far more with how Moms Demand has handled / structured this as opposed to candidate usage.

With that said, it is not hard to imagine some variation of “Lockdown” appearing in September as part of the quite legitimate calling out of extremist Barbara Comstock for her radical positions (on gun rights and otherwise) so at odds with the beliefs of the majority of VA10 voters.

In First TV Ad, Alison Friedman Vows to Stand Up to the NRA and Make Our Schools Safer

With her own daughter in public school, the ad highlights experiences far too many parents have to endure these days.

“I’m a mom and a problem solver, and I’ve spent my career standing up to abuses of power that others had written off as inevitable,” Alison said. “That’s what the NRA is.  That’s what Congresswoman Comstock has enabled. I’m running because we’re better than that.”

Congresswoman Barbara Comstock “sold our kids’ safety to the NRA” at a price of $137,232. In both her 2016 and 2014 campaigns, she received an “A” rating from the NRA. They have praised her for supporting concealed carry reciprocity and opposing universal background checks. She ranks 10th among House members who have received the most in financial support from the group.

In addition to being a mom in the Virginia school system, Alison is a former senior State Department official who has spent her career tackling major issues like human trafficking and increasing voting rights — and delivering tangible results. She’s running because she believes special interests like the NRA have no place in Congress or in Virginia schools.

The ad will air begin airing Tuesday, May 8th.