When Republican frontrunner for the U.S. Senate nomination, Corey Stewart, began his speech at the convention, he pushed the same attack on Senator Kaine’s son that we’ve heard from him again and again. 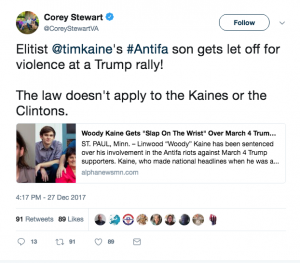 In response, Jennifer Lewis – candidate for the Democratic nomination in the Sixth District – has penned an open letter to the new GOP Sixth District chairwoman and leadership. Here’s the text of the letter:

Congratulations on a successful convention and a new Sixth District Republican leadership that’s focused on growing your party. A member of our campaign staff attended your convention, and I’d like to bring to your attention (and the attention of your committee) comments by one of your candidates, Corey Stewart.

Mr. Stewart opened his speech with the following remarks, which were met with applause:

“So I got a question for you.

We got somebody out there, he’s a member of antifa – which, by the way, is a domestic terrorist organization. He’s got a father, and that father is the United States senator from Virginia. And that’s Tim Kaine.

So let me ask you this question: who is ready to fire Tim Kaine and take back Virginia?!”

My question for you and your committee is: should we expect this kind of campaign rhetoric from Sixth District Republicans? Corey Stewart’s cheap and cowardly comments are out of step with the values of the people of our district, regardless of their political preference, and I hope you agree and will speak out.

Politics is rough and dirty business, but there are limits, and that includes family. There’s no reason to drag a politician’s child into political warfare, especially if that means distorting the truth by basically calling the son of a sitting senator a “domestic terrorist.”

Senator Kaine’s son is the grandson of former Governor Linwood Holton. In 1969, Governor Holton was the first Republican governor elected in Virginia since Reconstruction. He was able to win because he rejected the most vicious politics of the time and built a winning coalition of working people. Governor Holton represents the respectful and dignified Mountain and Valley Republican tradition in our district.

I hope you’ll join me in denouncing attacks on the families of candidates, attacks that are out of step with our values.

The people of the Sixth District expect and deserve better. 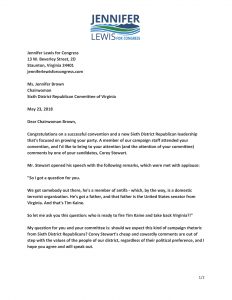 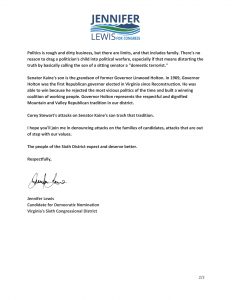