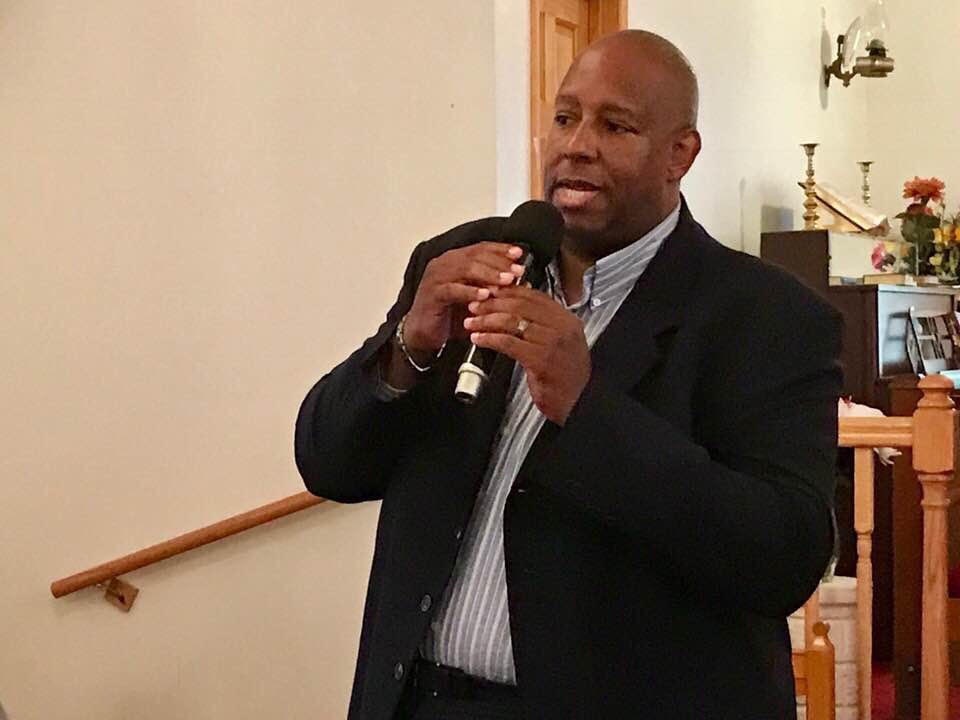 In a powerful statement published by Blue Virginia here for the first time, the Virginia State Chapter of the NAACP has called on the Virginia Department of Environmental Quality to halt all construction activity for both the Mountain Valley and Atlantic Coast Pipelines. [note: photo to the right is of Reverend Kevin Chandler, President of the Virginia NAACP, at the Union Hill Grove Baptist Church in Buckingham, VA]

The state NAACP statement was submitted to the Virginia State Water Control Board on May 30 as part of a public comment period on the proposed pipelines.  It was among thousands of comments  submitted by concerned citizens and environmental and community organizations.  The NAACP statement has remained hidden from public view because DEQ has failed to publish the “public” comments, pointing to an unspecified security “issue” with its website and the time needed to “process” so many comments.  DEQ’s lack of transparency left the NAACP statement and similar submissions largely unavailable – until now.  It is yet another example of what has been called DEQ’s broken regulatory process under its longtime director, David Paylor.

Denouncing DEQ for its decision not to apply Virginia’s state water quality standards and instead to defer to less stringent federal standards under what is known as Nationwide Permit 12, the state NAACP called on DEQ to conduct a “comprehensive site-specific stream-by-stream analysis that reviews the cumulative effects of the multiple crossings within individual watersheds.”

“Nationwide Permit 12 (Corps NWP 12) is inadequate and grossly neglects to consider the magnitude of both projects and the massive disruptions to surrounding communities and the environment that will result,” the NAACP said.  Moreover, it continued, there are “negligible mitigative and corrective measures put in place to minimize negative impacts and restore these lands to their original state (or better).

“Rich aquatic life, safe recreational opportunities, healthy wildlife habitat and clean drinking water resources, dependent upon maintaining high water quality standards, is in jeopardy if we do not step back, halt all construction activities, and properly assess the direct, indirect and cumulative impacts presented by these two projects.”

The state NAACP also noted that there are multiple legal challenges to these pipelines – the federal Fourth Circuit Court of Appeals just revoked two permits for a portion of the Mountain Valley Pipeline – and it called on DEQ to “order all construction activities for MVP and ACP to cease immediately until all legal and regulatory challenges are resolved.”

The state NAACP also decried the environmental racism inherent in Dominion Energy’s plan to build a massive compressor station in the historic African American community of Union Hill.  That injustice has been highlighted in Blue Virginia, here and here and has been told for years in protest, in song, on film  and in print elsewhere, here, here, here and here– among many other places.  Even the U.S. Department of Justice has gotten involved.

“Union Hill, Buckingham County, is a predominately African-American community,” the NAACP noted.  “Established by freed enslaved people, Union Hill relies on a single-source aquifer for their drinking water,” and that drinking water is threatened by the ACP.  “The ACP is to be constructed under the James River,” the NAACP noted and Dominion and DEQ gave “no consideration for pipeline ruptures which could pollute the single source aquifer which feeds the wells of Union Hill and most of Buckingham County.”

The comments by the Virginia State Chapter of the NAACP are the latest in a series of strong public statements by the NAACP against pipeline projects.

In May 2017, the North Carolina Chapter of the NAACP announced a “new statewide campaign calling on Governor Roy Cooper to phase out the import and use of fracked gas in North Carolina.” “This state must seize this urgent opportunity to help slow the global climate crisis, especially due to a failure of national leadership, and to stem the many other harms of fracked gas.”  The Rev. William Barber II, then president of the North Carolina NAACP, stated, “Globally and right here at home, people of color and poor people – who are least responsible for the high-consumption, fossil-fueled lifestyles scorching our planet – are being disproportionately harmed by climate disruption.”

As part of its statewide campaign, North Carolina’s NAACP joined more than 50 organizations in issuing an Emergency Methane Action resolution.  The resolution demands that “no new natural gas-fired power plants or pipelines are constructed in North Carolina, and all existing gas plants and pipelines are phased out expeditiously and replaced with clean, renewable energy.”

A few months later, in November 2017, the National NAACP issued a scathing report  that focused specifically on the fact that “the oil and gas industry dumps 9 million tons of methane and toxic pollutants like benzene into our air each year.”

In language that should be noted by every Virginia elected official who is considering what position to take on the Mountain Valley and Atlantic Coast Pipelines, the NAACP noted, “methane is a greenhouse gas 87 times more potent than carbon dioxide at driving climate change.”

The NAACP report, called “Fumes Against the Fence Line: The Health Impacts of Air Pollution from Oil and Gas Facilities on African American Communities,” went on to note that communities of color are particularly impacted by methane producing infrastructure: “Many African American communities face serious health risks as a result of toxic pollution from industrial facilities that are often located blocks from their homes. These life-threatening burdens are the result of systemic oppression perpetuated by the traditional energy industry, which exposes communities to health, economic and social hazards.”

Highlighting the “siting of natural gas infrastructure in environmental justice communities,” the National NAACP, noted that the “proposed route of the Atlantic Coast Pipeline directly impacts a number of African-American, and other vulnerable communities, in the state.” The NAACP noted that the ACP developers, Duke Energy and Dominion Energy, chose to route the ACP through counties where the African American population and the poverty rate is much higher than the statewide average. “The expansion of the ACP and other natural gas infrastructure along the North Carolinian coast would have unavoidable adverse impacts on already vulnerable communities.”

The national NAACP also noted that the North Carolina ACP compressor station, like the one on Union Hill in Virginia is slated to be built in a predominantly African American community. “Given the current state of vulnerable populations in the area of impact of the proposed pipeline, particularly in North Hampton, a compressor station, pipeline, and other natural gas infrastructure, could exacerbate health problems from increased air pollution.”

Recently, Governor Northam was asked about Dominion’s plans to build a compressor station in Maryland that would be visible from George Washington’s Mount Vernon.  Northam said, “If it’s going to impact their view, if it’s going to contribute to environmental detriment, then it’s something I’m concerned about.”

In fact, there is no record of Northam ever having made a public comment on Union Hill, despite the fact that the issue has been well publicized.

One week after Northam defended “the view” from George Washington’s plantation, Dominion announced plans to move the compressor station.  Union Hill has been fighting for four years.  Dominion refuses to budge. And Northam remains silent. As do others.

On May 30, Northam’s spokesman, Brian Coy, was caught on a “hot mic” moment denouncing pipeline opponents as ”not acting in good faith.”  The statement made during an appearance by Northam on WTOP’s “Ask the Governor” show, was as offensive as it was untrue.  The pipeline resistance includes elected officials, environmental organizations, affected landowners and concerned citizens across the state.  Northam, who was sitting right there, did not contradict Coy.

Instead, the Governor laughed.

The question now for Governor Northam – and for all members of the Virginia General Assembly is clear.

Do you stand with concerned citizens, landowners and your fellow elected officials who have spoken out against the pipelines and for environmental and social justice?

Do you stand with the NAACP, the nation’s oldest, most powerful and most respected civil rights organization?

Or do you stand with the fossil fuel companies that want to impose these pipelines on an unwilling public?

We are keeping tabs.

Which side are you on?