According to Wild Virginia, “a leading advocate for forest protection in Virginia” (bolding added by me for emphasis):

Through a Freedom of Information Act request, David Sligh of Wild Virginia and the Dominion Pipeline Monitoring Coalition (DPMC) has acquired almost all of the comments citizens (around 10, 000 of them) submitted to State Water Control Board through the Virginia DEQ. Individuals and conservation groups explain why the Corps of Engineers’ blanket permit is not sufficiently protective of our state waters.

Here is a link to the documents: Comments to SWCB on NWP 12

Wild Virginia and DPMC are currently scouring the comments and will publish our summary of the whole body of information early next week. The vast majority we’ve seen so far are form emails and letters that contain no useful information the Board can use in making a decision whether to take new action. By contrast, the comments by landowners and technical experts contain much detailed, site-specific, and scientifically-based evidence of the dire threats to the thousands of waterbodies MVP and ACP propose to dig and blast through, under a lax Corps approval.

Great work by Wild Virginia, and I look forward to their thorough analysis of these FOIA’ed documents. Meanwhile, I skimmed the comments, although again note that there are 10,000+ so I certainly didn’t look at all of them (of course, there are thousands of duplicates or near-duplicates, so actually I think I mostly likely got the gist of it).

See below for a few examples of what Wild Virginia’s talking about when it refers to “form emails and letters that contain no useful information the Board can use.” Note that many of these clearly come from groups (e.g., Dominion Energy, LiUNA) with a strong financial interest in keeping these pipelines going; that these are clearly organized campaigns; and that in several cases, there are literally hundreds of nearly identical postcards, letters, etc., using the same basic talking points:

In sum, these pro-pipeline talking points are all false, flawed and/or highly misleading. They also are clearly part of a well-organized, well-funded campaign (mostly by Dominion and LiUNA) to churn out thousands of postcards, emails and letters along the same lines.

The question is what DEQ will do with these obviously “astroturfed” comments.  As far as I’m concerned, since this input was supposed to be limited to specific comments on specific streams, and since these comments are just generalized/b.s. talking point, they should all be tossed unceremoniously into the trash can and/or shredder.  I also wonder how many of these astroturfed comments come from the areas directly affected by the pipelines? How many are from in state vs. out of state?  To what extent do these mass-produced post cards, etc. simply demonstrate that well-funded, pro-pipeline interests (Dominion, LiUNA, etc.) are able to drum up support from out of the areas directly impacted, in order to ram these projects down the throats of the people who actually live there, whether they want it or not? Does DEQ head David Paylor – yeah, this guy! – even care, or is this whole thing a big charade to provide him cover for what he wants to do anyway: give a green light to Dominion, etc. to do whatever they want.

P.S. If DEQ enforces its own rules, the “sole purpose of the written public comment period is for interested persons to submit technical comments and/or information for the MVP and ACP projects” related to “specific, wetland or stream crossing(s).” 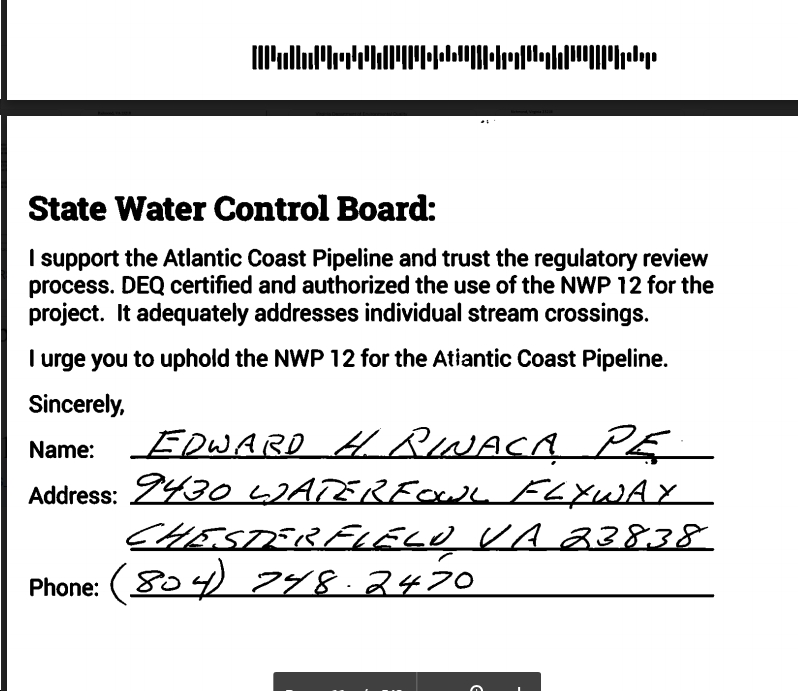 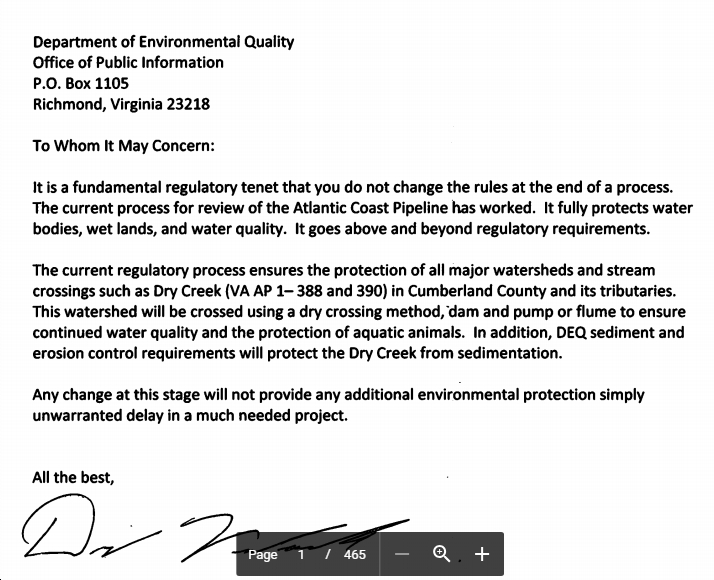 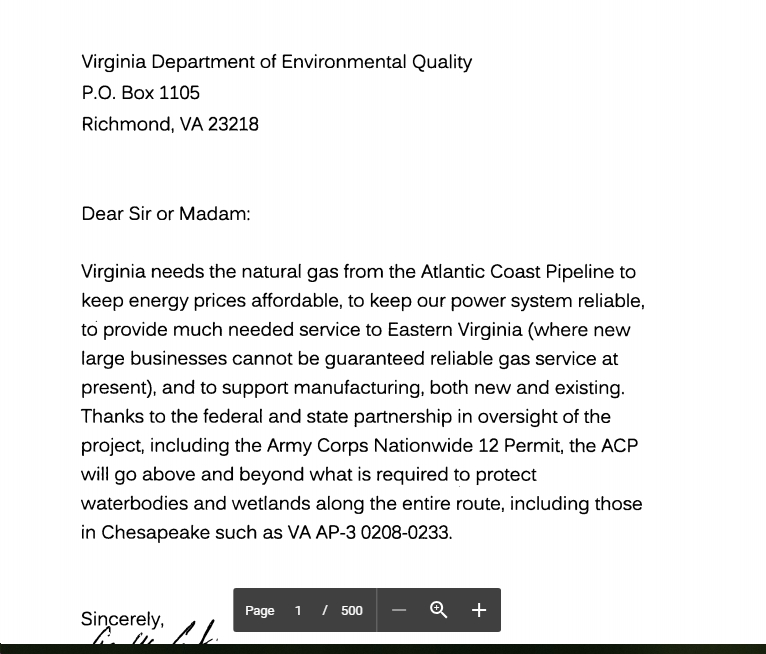 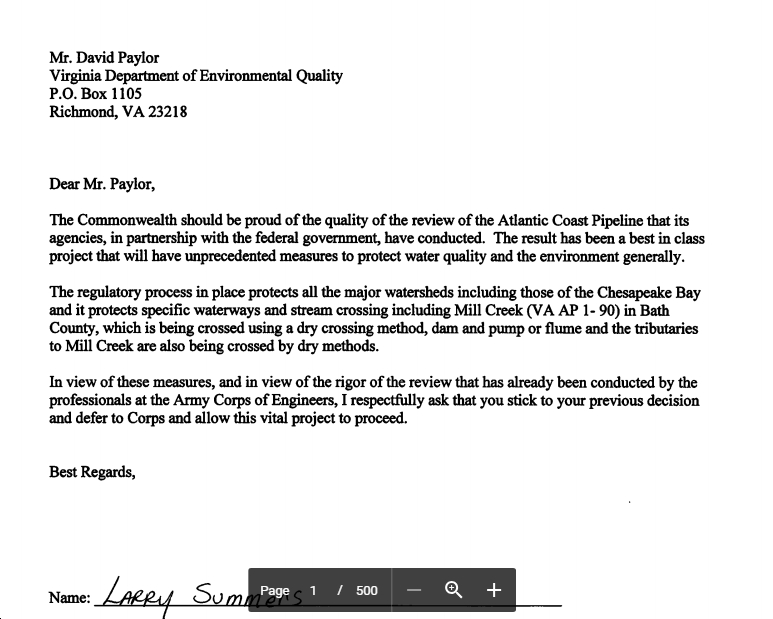 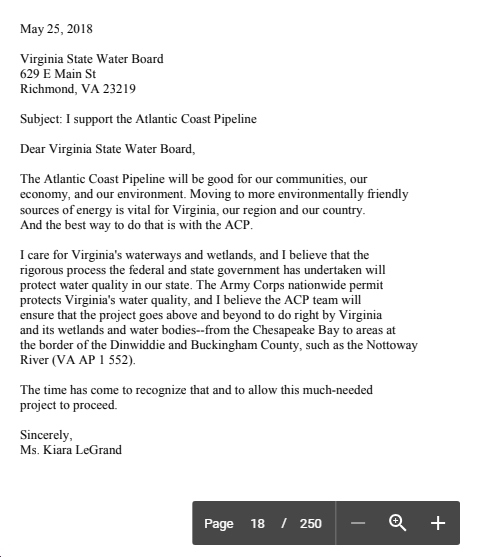