One thing about Corey Stewart, he’s nothing if not consistent. Consistently nasty, that is. And consistently wrong. And consistently dishonest. Heck, even one of his fellow Virginia Republicans, Del. Glenn Davis, thinks that Corey’s a “phony” and a “charlatan” (and Davis is right!).

For instance, check out the screenshot of Corey’s Facebook post, below, in which he yet again claims that there’s a “Violent Left” (any evidence? nope, of course not…because it’s completely false) and that there was supposedly “violence” at last night’s “Stop Kavanaugh” rally in front of the Supreme Court (any evidence? nope, of course not, because there wasn’t any violence at last night’s “Stop Kavanaugh” rally). By the way, I talked to someone who was at the rally last night and also looked at news articles, and I have heard ZERO evidence of any conflict or threats of conflict, unless perhaps you count the chants of “abortion is murder” from “a handful of anti-abortion rights counterprotesters” and the fact that protesters were justifiably upset about the Kavanaugh nomination.

In short, lying liar Corey Stewart is lying yet again, this time claiming that a 100% peaceful protest at SCOTUS was supposedly violent, which again IT WAS NOT. Sadly, this is part of a pattern of Corey making shit up. Examples? Just check out his Facebook page, where in just the past few weeks he’s falsely claimed:

Also, check out PolitiFact, which gave Corey a “Pants on Fire” for his wild lie that Tim Kaine supposedly “doesn’t want a border at all.” In fact, PolitiFact found that “Kaine has backed two comprehensive immigration bills that featured significant measures for increased border security,” and “has not made any statements about getting rid of ICE, let alone the border.”

And PolitiFact gave Corey a “mostly false” for his claim that he’s “always condemned … any of these white supremacists or bigots or anything like that.” According to PolitiFact, “Although Stewart has distanced himself from [anti Semites/white supremacists] Nehlen and Kessler during his campaign for the Senate, he has not always condemned their beliefs. It was only in the face of mounting public pressure that he spoke out against them, and even then it took him some time.”

Bottom line: Corey Stewart’s entire campaign is based on lies, fear-mongering and demagoguery, not necessarily in that order (and not much different from his role model Donald Trump, who lies constantly). In response, it seems like the best thing to do is to ignore him, while working our butts off to ensure a massive reelection win for Sen. Tim Kaine this November. Sound like a plan? 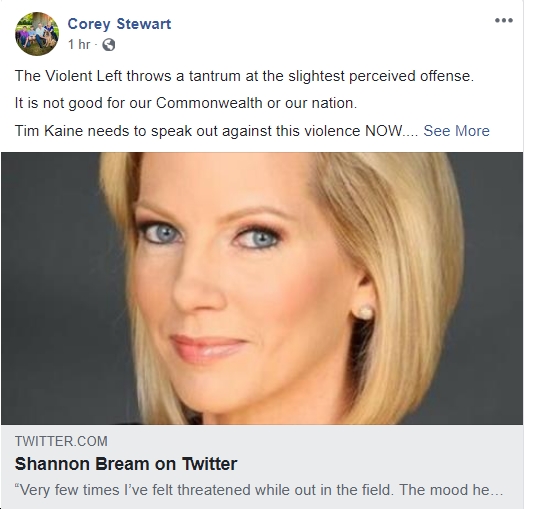