Any thoughts as to why Comstock’s team would be so interested in using the Congressional office to spam VA10 voters in-boxes with material to suggest falsely that extremist Barbara Comstock is somehow a paragon of bipartisan, moderate virtue?

Hmmm … anything come to mind as to why this abusive (legal but unethical) Comstock spamming from the House office account occurred?

Just as perplexing, it seems, as Comstock’s abusive (legal but unethical) use of ‘Franked’ mail from her House office in late summer, early fall 2016 …

UPDATE:  Sparked, in part, due this spamming incident, I’ve been applying slash and burn to decades of too many 10,000s of emails. This process has uncovered interesting items that still, years later, merit some form of attention with relevance for today.  An example: Congressman Frank Wolf’s (now deleted) unsolicited emails.  A total of 59 emails from May 2007 through November 2013, roughly equal between election and no election years, with no (NO) spurt of 10 emails in a few days (max being three emails spread across a month). See below for a sample. Hmm … quite a contrast to Barbara’s spamming, no? 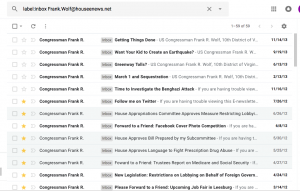