We’ve been covering the Scott Taylor/Shaun Brown petition fraud scandal for weeks – see here, here, here and here, for instance – but now the Virginian Pilot, the VA-02 local paper, has done a serious investigation. The results? As sleazy and slimy as you’d expect, given everything we’ve already learned. A few lines that jumped out at me from the Virginian-Pilot report (definitely read the whole thing!) were:

Amazing, huh? The big question now, of course, is what did Scott Taylor know and when did he know it? And also, who on earth would vote for Taylor given all the sleaze oozing from his political operation? 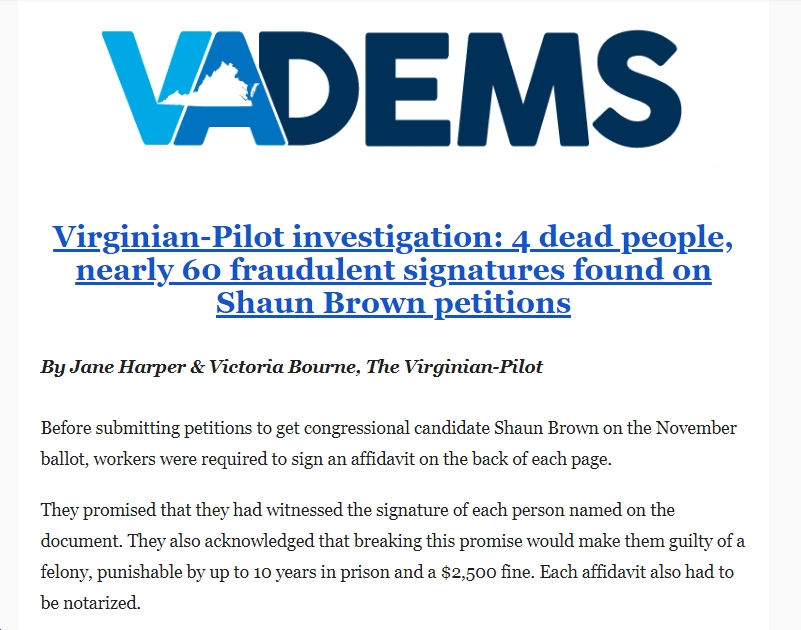 UPDATE: From the Democratic Party of Virginia…

RICHMOND, VA — While Congressman Taylor has clammed up, refused to answer questions and withdrawn from debating Elaine Luria, reporters and investigators continue to look into the egregious petition forgery by his paid staff in their efforts to get a third party candidate on the ballot.

Today another round of stunning revelations.

A Virginian-Pilot investigation found that, among many new developments, that

“Scott Taylor and his staff have violated the trust of Hampton Roads residents. While we look forward to the results of the Special Prosecutor’s criminal investigation, Scott Taylor needs to come out of hiding NOW and answer what he knew about his staff’s forgeries and whether he directed them to commit these forgeries.” – Democratic Party of Virginia Communications Director Jake Rubenstein

Yep, it sure feels like Lucy and the football https://bluevirginia.us/2021/10/wednesday-news-case-closed-99-9-of-scientists-agree-climate-emergency-caused-by-humans-democrats-scaling-back-budget-bill-press-for-compromise-by-weeks-end-1-6#comment-5577765576 h/t @vaplan2018