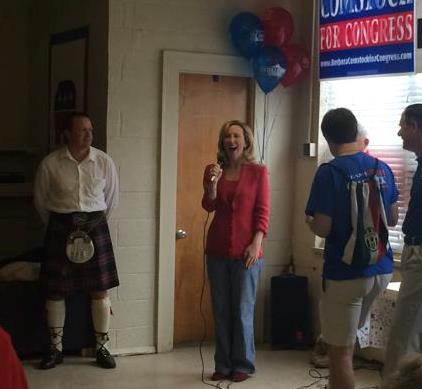 In case anyone missed this gem, here is Corey Stewart campaigning at Barbara Comstock’s office grand opening event in 2014. I post this because Comstock has been super-evasive about neo-Confederate Corey, “ducking the question most on voters’ minds: will she campaign with the 2018 VA GOP standard-bearer Corey Stewart?” (even as her campaign “signage was proudly displayed alongside that of Corey Stewart”). Comstock has also used very similar messaging as Corey has, “playing the same race/immigration card Gillespie and pro-Confederate statue, race-baiting Corey Stewart, the GOP’s Senate nominee, fancy.” For just one instance of Comstock refusing to answer a simple question about Corey Stewart, see the following video from June.

WATCH: @BarbaraComstock doesn’t give an answer on whether she backs @CoreyStewartVA for Senate:

Clearly, not saying clearly whether or not she’s supporting Corey Stewart is a political calculation on Comstock’s part – nothing more, nothing less – even as her signage and messaging are in sync with Corey. Tricky tricky.

P.S. Sure, this image is from 2014 but everyone knew Corey Stewart was a liability at least as far back as 2007 (note by Lowell: for more on Corey’s anti-Latino-immigrant crusade in 2007, see the superb film 9500 Liberty)!