I heard about this story a few hours ago, but I was at an event this evening and couldn’t post about it until now. The RTD story is behind a paywall, but the gist of it is that “Brian Moran, Virginia’s secretary of public safety and homeland security, apologized Friday when asked why he shared a Facebook post that called for a boycott of Nike because of its alliance with former NFL quarterback Colin Kaepernick.”

As you can see in the screenshot, below, Moran’s post prompted Jewel Jordan – who the RTD identifies as ” session assistant to Sen. Linwood W. Lewis, Jr., D-Accomack” – to write, “Moran has DELETED THE POST!!! …but screenshots last forever 😉 ”   Jordan added the questions: 1) “Has Brian Moran (Secretary of Public Safety for the Commonwealth of Virginia) been hacked?” and 2) “And is that the official Virginia State Police Facebook page?!?!”

The entire thing is bizarre – and completely unacceptable, as far as I’m concerned. For starters, why on earth would the Virginia State Police share something so inflammatory as this (“Nike continues to fan the flames of the endless fallacy that police are nothing more than inhuman tyrants looking to take unprovoked abusive force on African Americans” and “The decision to promote the antics of Mr. Kaepernick is a slap in the face to the hundreds of thousands of law enforcement officers throughout this great country”)? And why would the Secretary of Public Safety for the Commonwealth of Virginia, Brian Moran, spread this even further?

Of course, this IS the same Brian Moran who: a) headed up the main for-profit “education” association (APSCU), working closely with hard-right ALEC and with House Republicans and declaring “total war” on President Obama; b) issued the report whitewashing allegations of abuse and neglect at the Shenandoah Valley Juvenile Facility; and c) let’s just say he was in charge of the Charlottesville responses, 2017 and 2018, and leave it at that. All of which raises the question as to why someone with such horrible judgement was ever hired for this important job in the first place and why he’s still in the position. Mystifying. 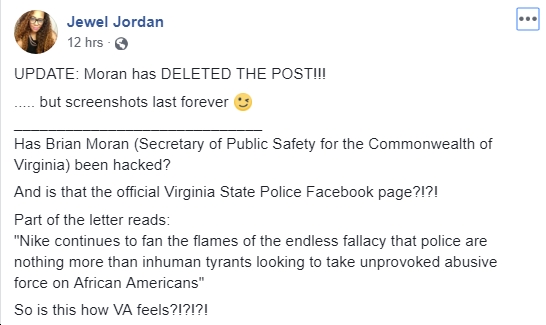 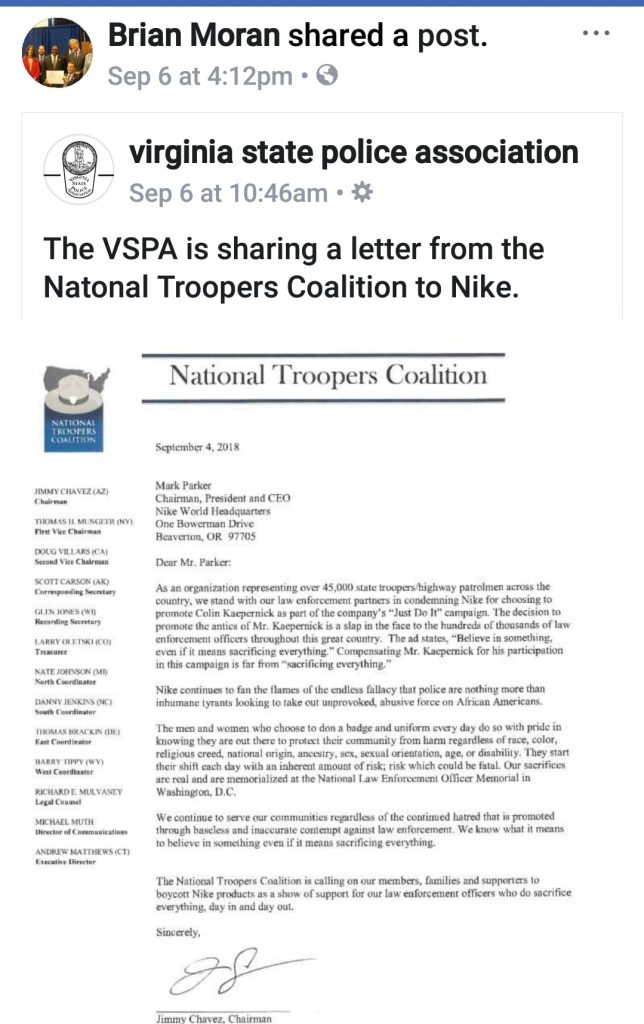