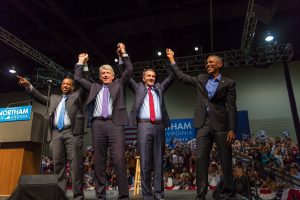 The midterm elections are less than a month away,  and per Nate Cohn’s well-researched perspective, Democrats have a strong shot at taking the House, perhaps with a healthy margin – or alternatively, they could fall just short of victory.

So if you’re not doing all you can to help elect Democrats, let me explain why you must. It will require traveling through the mists of time all the way back to…2017.  Back before last November’s election, the question of how well Dems would do in Virginia’s gubernatorial and House of Delegates elections remained very much unsettled. The final Real Clear Politics polling average before the election had Democrat Ralph Northam ahead of Republican Ed Gillespie in the race for governor by a slim 3.3 points.

CNN Chief Political Buffoon Chris Cillizza posted a breathless story on Election Day 2017 headlined, “Are Democrats blowing it in Virginia?”, in which he quoted GOP pollster Glen Bolger as saying, “It’s hard to imagine a statewide candidate who was in the lead with three weeks left who has had a worse close to their campaign.” Cillizza then added: “And, by any objective measure, it’s hard to argue with Bolger’s assessment”, pivoting to Northam’s position on, um…“sanctuary cities.”

Northam, you may recall, ended up crushing Gillespie by an impressive 9 points.

More serious observers than Cillizza had their doubts as well. Larry Sabato’s Crystal Ball was mostly cloudy about the race. Geoffrey Skelley of Sabato’s U-VA Center for Politics wrote: “the demographics of the Virginia electorate help explain why a close contest for governor isn’t a surprise.” Skelley then explained why, as for most off-year elections, “the gubernatorial electorate will likely be older, whiter, wealthier, and more educated” and hence presumably favorable to the GOP.

Arguably more impressive than Northam’s win was how Virginia Democrats flipped an unprecedented 15 seats in the House of Delegates, vaulting the party from one third of that chamber to control of nearly half. While Democratic gains were expected before the election, their magnitude in the end surprised nearly everyone.  Here at Blue Virginia, an unscientific pre-election poll of our readers found more than half predicting a gain of 5-10 seats, but only about a tenth expecting to net 15 seats.

Blue Virginia’s Lowell did a fine job last year ranking the House seats that Democrats had the best chance to flip – of his top 18 races, only #10 (Donte Tanner), #16 (Shelley Simonds) and #18 (Willie Randall) fell short — Donte by only about 100 votes, and Shelley by an agonizing ONE vote. (As an example of the observer effect, surely this list also influenced which races that voters focused on, improving their relative odds of victory.)  The real surprise was how high this blue wave ended up cresting.

How did that happen? As the WaPo found, “Turnout…was the highest in 20 years for a gubernatorial race, five percentage points and 10 percentage points higher than the last two.” By region, “The highest turnouts were in Central Virginia and Northern Virginia, areas [Northam] won handily.”

In other words, it’s not that the poll data were wrong, it’s that they were based on certain turnout models – which we can blow up when we do an extraordinary job of turning out our voters. And as 2017 showed, we are increasingly attracting the types of voters who can make the difference in many US House races — educated suburbanites, motivated women, young people and minorities — IF we get them to the polls.

Several commentators at the time of the 2017 elections, like Dave Wasserman of the Cook Political Report, noted how they prove a harbinger of the 2018 midterm elections, IF Dems motivate their base and appeal to those disgusted by current Republican atrocities. Per Chinni again:

A demographic analysis of House Republicans by the NBC News Political Unit finds there are 54 representing what might be called “suburban districts.” Those are districts where more than 75 percent of the population lives in an urban area and where the electorate tends be more diverse, better educated and/or wealthier than U.S. population as a whole. Places that look something like the D.C. suburbs.

Republicans, as always, can be counted on to pull every nasty trick and ploy in the book to try to win.  But will it ultimately help or hurt them? Before last November’s election, Nate Silver of 538 offered the GOP the same advice that many others have: While “Gillespie pollster Gene Ulm believes Republicans will run on issues such as sanctuary cities if Gillespie wins…Republicans might be hesitant to embrace the more racially freighted parts of Trump’s message if Northam wins easily.”

It’s crystal clear that Republicans are NOT taking that hint. Here in Virginia, we have (extremist wolf in “moderate” sheep’s clothing) Rep. Barbara Comstock ranting about MS-13, just as Gillespie did, Corey Stewart waving the Confederate flag, and right wing Congressmen like Dave Brat and Scott Taylor still hallucinating over nearly non-existent violent “criminal aliens” and, in Virginia, totally non-existent “sanctuary cities.” It’s why, to so many potential voters, they look more awful than ever.

We have a golden opportunity but hope and opportunities are not enough by themselves.  At this point it’s all about getting out the vote — GOTV. Disregard the polls — make them irrelevant by knocking on doors, making phone calls, and pleading with every Democrat you know, and some you don’t, to make sure to vote.

My physical therapist told me recently how she normally doesn’t vote in non-presidential elections, but last year, Virginia Democrats kept pestering her with calls and notes on her door until she finally gave in.  She had no idea what GOTV is – but she voted, and it made all the difference.

Leave no stone unturned. We need every good voter we can find to go to the polls in order to bring us back to an America we can once again respect and recognize.